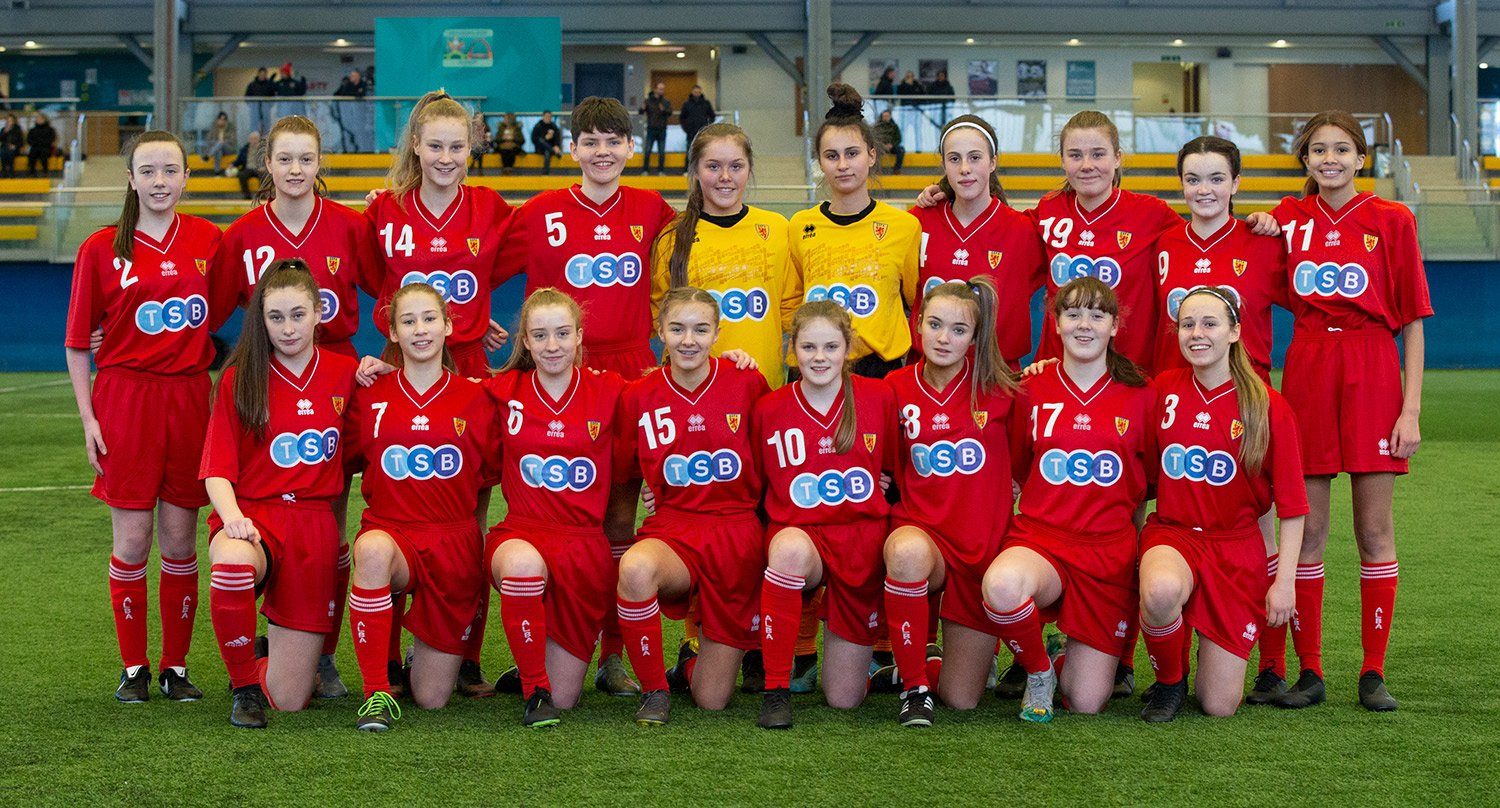 As storm Ciara battered the whole country today the Scottish Schoolgirls team continued their preparation games in readiness for the Bob Docherty tournament in the relative ‘heat’ and calm of the Toryglen indoor arena in Glasgow against a strong Hamilton Academical squad.

The starting eleven included six players who had not started in the previous game against Rangers, proving the depth and ability of the full squad.

This depth and talent will certainly be needed at the Lilleshall National Sports Centre in April when the necessity of the full squad will be called upon as the girls will play three International matches in three draining days.

Ava had Leigha, Lily, Millie and Niamh in front of her as a back four, with Kirsty sitting in front of them orchestrating proceedings.

Olivia and Emma complimented Kirsty in this central midfield triangle with the width being provided by Caitlin and Tiree.

Jodi played as the point of attack as the central striker in this slight tweak in formation for this new test for the young Scots.

The game started well with both teams settling into the contest. The ball was being passed around confidently by the Scots and it was pleasing to see that from the offset, the work that they had been doing in their morning training session on creating overloads in the wide positions was very quickly bearing fruit.

Caitlin and Niamh were linking very well on the left-hand side and it was this combination that carved out the first chance of the game.

They combined and attacked the right full back and expertly worked an opening where Niamh delivered a very dangerous ball across the six-yard box.

However, the on-rushing Jodi just failed to make a full contact on the ball.

Jodi’s movement was causing the Hamilton defenders all sorts of problems and she was very unlucky moments later when she clipped a left footed shot just beyond the left hand upright with the keeper well beaten.

Olivia and Emma in their advance central roles were causing all sorts of problems for their Hamilton counterparts.

Their pressing collectively caused a mistake in the Hamilton defence and as Leigha pounced on the loose pass she drove forward down the right flank. She played a lovely one-two with Tiree and set off to the bye line.

As she looked up, she picked out Olivia at the edge of the box and although the strike was clean and powerful, the keeper made a great save down to her right to parry the ball away for a corner.

From the resulting corner both Millie and Lily attacked a delightful ball into a dangerous area but the Hamilton defence held firm and cleared.

It was Tiree’s turn to show her individual skills by skipping past a couple of challenges to get a shot at goal but the ball just cleared the crossbar and to safety.

The Scots were knocking on the door and it appeared that it was only a matter of time before this ‘storm’ of attacks would breach the Hamilton goal.

The goal itself came from the tenacity and desire to attack and get beyond the back four from Emma.

She picked the ball up on the half-turn in a little pocket of space around twenty-five yards out and drove straight for the heart of the defence, with great balance and fast feet she glided past defenders and placed the ball calmly past the Hamilton keeper.

It was just what the Scots deserved and the supporters showed their appreciation for an excellent piece of individual skill.

It was not long after this that Olivia scored an almost carbon copy of the first goal as she drove purposefully at the defenders, again her desire and fine individual skills took her into the box leaving defenders in her wake as she finished with aplomb.

The wide pairings of Leigha and Tiree on one side with Caitlin and Niamh on the other continued to combine to provide the ammunition for the forward players.

As the period went on the Hamilton defenders had to work hard to keep the Scots at arm’s length.

Lily and Millie were looking after the Hamilton breakaways and Ava dealt expertly with any balls over the top.

Both centre backs looked comfortable and confident at the back and as the half drew to a close Lily looked up and played a lovely ball into Kirsty in the middle of the park.

The ‘pivot’ then found Tiree at full pace on yet another of her forward runs, with a wonderful defence splitting pass.

Tiree looked up and picked out Jodi at the edge of the box but on this occasion the ball just cleared the crossbar.

It was a fine finish to the period and as the referee blew his whistle to end it, it was the young Scots who were most definitely on the front foot.

Again, as in the previous preparation match the Scots made full scale changes bringing on six outfield players.

Eilidh took over the right back berth from the ever available and strong running Leigha with Madilyn replacing the central defensive organiser Lily.

Georgia came into the middle of the park replacing Kirsty with Ami replacing Emma in the more advanced attacking role.

Keira took over the role of provider from the left flank with Sophia up top as the focal point of the new attacking line up.

The game itself with so many changes for Scotland took a little time to settle. The changes both positional and in personnel did lead to a couple of nervous first touches as players got to the pace of the game.

It was in this early period that Hamilton scored an excellent goal.

The Scots had failed to clear on a couple of occasions and as the ball dropped at the edge of the box the Accies striker blasted the ball towards the goal. The shot itself was very well hit and ended up flying high into the net.

The goal, pleasingly for the side line, led the young Scots to collectively re-group and it got them to get back to passing the ball around and to keep possession.

Georgia took to driving at the Hamilton defence, pushing them back to their own goal.

It was from one of these positive runs that her beautifully weighted pass found Keira at full pace.

Her ball was played inside to Sophia who instantly brought the ball down, turned and shot at goal, but on this occasion the defender made a last gasp block and the ball deflected for a corner.

Madilyn settled into her central defensive berth and starting to distribute passes into the feet of both Caitlin and Keira as they both continued to power forward.

The game was now being played in the Hamilton half with the Scots carving out shooting chances from all angles.

It appeared that it was only a matter of time before they scored a third goal.

Indeed, the goal did come from the ever-dangerous Ami who was relishing the more advanced role. It was to be the first of an impressive hat-trick.

Annalisa replaced Ava in the Scots goal and immediately ordered her defenders forward as she gathered her first catch of the day.

Keira was beginning to tease the Hamilton right back and from a delivery to the back-post Ami back healed the ball from waist high towards goal.

As the ball hit the Toryglen surface, the spin took the ball past the unfortunate goal keeper. The goal again gave Scotland a breathing space between the teams.

As the period concluded the Scots were showing a dominance that was pleasing to see. The standard had stayed high throughout the two periods with a desire being shown by all of the Scots to make their mark when they were on the park.

The third period started as the second had concluded with Scotland on top.

Kirsty replaced Olivia and continued to deliver the probing balls that Olivia had provided to both Keira and now Jodi who had replaced the tireless runner in Tiree.

Eilidh continued to drive forward from right back and it was from one of these excellent driving runs that another chance fell at the feet of Ami to get her third. However, on this occasion the ball flew across the face of the goal and wide of the target.

It was not too long before she did get her hat-trick. Keira teased and tormented her full back once again and as she cut inside, she delivered a pin point cross which Ami took on her chest.

The first touch set up the relatively simple task of sweeping the ball away for her third goal of the day.

Lily had replaced Millie and with Niamh coming back on for the athletic Caitlin, the pace of the game continued towards the Hamilton goal.

Sophia was now a continuous thorn in the side of her club team mates and it was great to see her score a lovely goal from open play that her overall performance deserved.

The final changes brought Emma on for Ami and Eilidh being replaced by Leigha.

The two new ‘finishers’ played their way back into the pace of the game and it was from another powerful and direct run down the right-hand side that brought a cracker of a goal from Leigha.

She played a lovely one-two with Jodi and then as she squared up her opposite number, she swapped the ball from left to right and then blasted the ball high into the net from the corner of the eighteen-yard box.

The game continued to flow as the Scots continued to press forward, indeed it was the Scots flying left back on this occasion who did not want to be out done by her team mate on the right who completed the scoring as Niamh blasted an unstoppable drive from the edge of the Hamilton box high into the net.

It was another good run out at this point of the season for both teams, with the Scots moving onto Edinburgh to play Boroughmuir in early March.

This will be their final preparation game on home soil before they go to Jersey to play two games and then onto Larne to play a friendly International match against Northern Ireland, all before their quest to win the Bob Docherty Cup when they travel to England to play against all of the home nations.

Kirsty and Ami after the game against Hamilton Academical