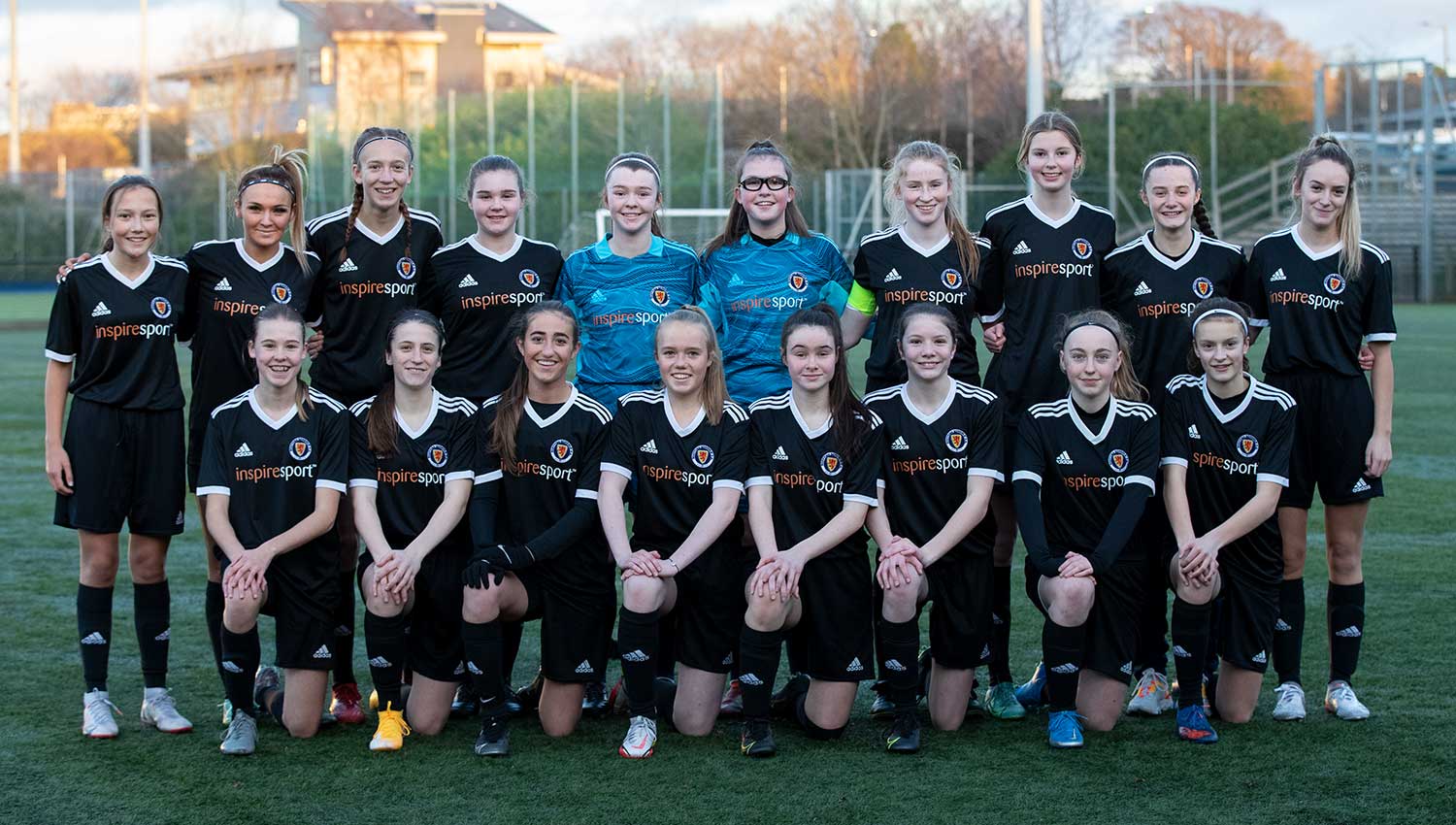 The first game for the new Scottish Schools squad was played at Meggetland in Edinburgh against a very strong Boroughmuir HS senior team, who are expected to figure in the latter stages of the SSFA Senior Shield competition.

The large expectant crowd were excited to see how the new squad would gel in these initial preparation matches. They were all there to see the quality of the squad and the players who would be representing Scotland on the International stage in the Bob Docherty tournament down in Newcastle in April.

The starting team for the first third period consisted of Erin Halliday in goals with a back four of Mia Scott, Olivia McStay, Kate Fraser and Millie Paton. Kate had the captains arm band for the day. The midfield consisted of Lucy Barclay, Sophie Black, Holly Daniel and playing against her school team mates Gigi Bradford. The two strikers for this period were Laura Berry and a returning Sophia Martin who had played in the ‘rainbow’ squad of 2020 and in the victory against England in the last Scottish Schools game.

The game started at a frantic pace with a mixture of nerves and excitement playing their part. Extra touches were taken and passes were forced. However, the young Scots quickly got into their stride and it was not long before Laura and Sophia combined to produce the first chance of the day, with Laura testing the Boroughmuir keeper with a powerful low shot. The keeper made an excellent save and subsequent follow up smothering the ball at Laura’s feet.

The back four were now relaxing into the game and began to pass the ball confidently to each other and also into the midfield players. Kate and Olivia Mc played passes into both Gigi and Sophie B as they pushed the team forward. Mia and Millie were also venturing forward, linking with Holly and Lucy. It was also pleasing to see the wide players having a run at their opposite numbers and getting crosses into dangerous areas. Indeed, the next good chance was from a very positive run from Lucy who linked with Sophia but again the keeper thwarted this opportunity.

However, it was not long before the young Scots made their breakthrough. Again, it was the midfield players positive attacking play that had Lucy linking with Sophia. Her through pass was played into the path of Laura and one on one with the keeper she expertly slid the ball into the corner of the net. It is always good to see the ball at any level pass the keeper and finish up in the net, even more so when you are wearing the SSFA badge.

The Scots grew in confidence as the ball was played around in all the areas of the pitch. Unfortunately, during one of these passing phases Mia appeared to ‘roll’ her ankle and was replaced by Lily as a precautionary measure.

The Scots kept knocking at the door of the opposition with Sophie B going close with a lovely strike that flew just wide of the keepers upright. Laura then provided Holly with the chance to get behind the Boroughmuir defence. Her cross was delivered into the 6-yard box, but it just eluded both Sophia and Lucy at the back post.

Gigi was a solid figure at the centre of midfield giving Sophie B the licence to get forward and link with Sophia and Laura, and it was from one of these positive attacking forages that led to her playing in Sophia. On this occasion Sophia was brought down around 30 yards from goal. Sophia picked herself up and took the freekick herself and was unlucky to find the safe hands of a well-placed keeper.

Erin was keeping her back four on their toes, but needed the help of both Lily and Millie to keep the opposition out with a double block from them as Boroughmuir went forward.

However, this appeared to spur the Scots on and the second goal came with the Scots going forward confidently.

Sopha on this occasion dropped short as she linked with Gigi. Sopha looked up and picked out the run of Laura. Laura was now one on one with the keeper. There was only going to be one outcome as the young striker expertly lifted the ball over the advancing keeper. It was no more than the team and the player deserved as the period finished with Scotland holding a two-goal advantage.

The Scots made changes at the start of the second period with Freya Brien and Isabella Conreno replacing Sophia and Laura. Sophie Timlin and Mia Mc Arthur came into the middle of the park. Indeed, it was Sophie T who had the first chance of the second half when she linked up with Freya and fired a powerful strike just over the bar.

Both Freya and Isabella linked up well together and with Sophie T continuing to probe and supply passed into dangerous areas the Scots continued to grow in confidence. Holly and Lucy kept the width for the Scots, and on numerous occasions ran at the fullbacks and delivered crossed into the opposition box. Isabella and Freya continued to link the play and force their opposite numbers back.

Oliva Mc decided to join in and pushed forward beyond Mia Mc who automatically ‘sat’ for her as she drove forward. Her ball to Isabella was held up well by the striker as she delivered a perfect ball to Holly. Holly expertly cut inside and stroked the ball inside the keeper’s left-hand post. 3-0 to the Scots.

Isabella and Freya again linked well, this time on the right-hand side as Freya beat her opposite number and delivered into the 6-yard box, but the ball evaded the strikers on this occasion. Millie and Oliva Mc as the fullbacks for this session kept running positively forward, linking with both Holly and Lucy.

Emma came on to replace Erin, who would be happy with her clean sheet, distribution and communication with her back four.

The Scots kept the ball through Mia Mc and Sophie T, and kept the opposition at arm’s length, giving Lily and Kate the time to start moves into the opposition’s half. Lucy produces the next chance as she picks up the ball and drives in field. She takes the shot on herself but is blocked by the defender. Freya picks up the resulting ball and fires the ball towards the goal, but on this occasion, it hits the side netting. The period ends with the Scots on top, and looking good for their 3-0 lead.

The third period starts with personnel and positional changes. Kate moves to right back with Gigi and Lilly at the heart of the defence. Mia Mc drops to left back with Freya and Sophia occupying the wide midfield roles. Sophie T and Sophie B, fill the centre of the back engine house, with Laura and Isabella leading the line together. Olivia Chomczuk is the only player not to figure today through injury, however it is hoped that she will be available to strengthen the squad very soon.

The Scots continue to press and the desire to win the ball is demonstrated with Lily, Gigi and Mia Mc all attacking the ball in their allotted areas. Sophie B also joins in and wins her own individual battle, then plays a defence splitting ball to Laura, who finishes with aplomb to complete her hat trick.

Sophia continues to threaten the opposition goal but, on this occasion, her shot drifts over the bar. Freya and Isabella then combine to play in Sophie T, who shoots for goal but he keeper who has pulled off some great saves does so again. Laura then combines with Isabella and Sophia again with the later playing in Laura, who hits the post with her effort.

Emma in the goal is composed and confident as she collects a cross with safe hands.

The game ends with the Scots again looking confident in possession and worthy 4 – 0 winners.

It is a good start for the new squad, with Glasgow City their next game, before playing the first International match. This will be a challenge match against Northern Ireland in Larne, in two weeks’ time.