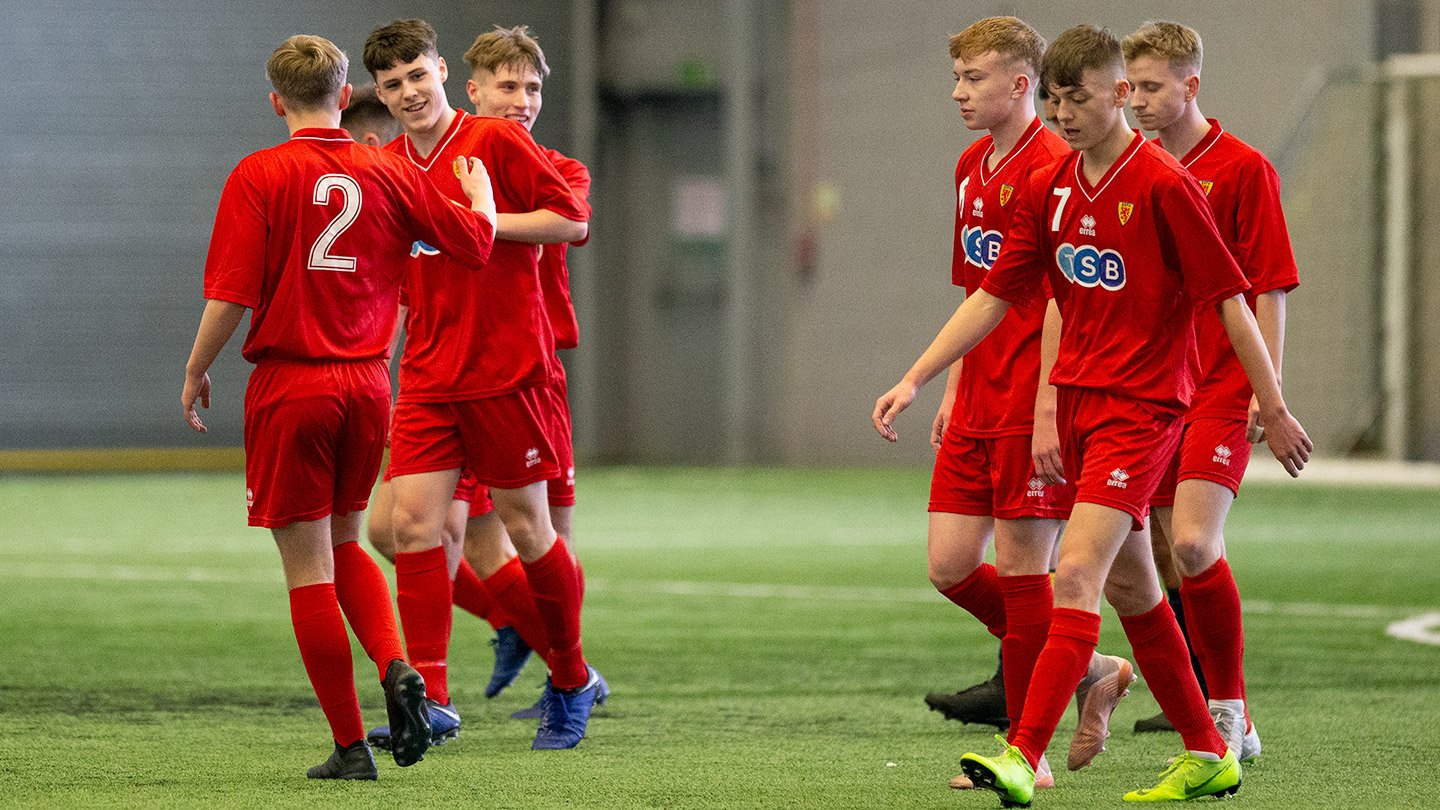 Scotland took on Stirling Albion at Toryglen in the culmination of a two-day training get together to allow this year’s squad to familiarise themselves with one another.

OWEN ANDREW gave our squad a dream start to their campaign by sweeping a low Wilson Romanis into the net in the first minute of play. The same two men combined in the fifth minute, when another low Romanis cross was fired towards goal, but the Albion goalkeeper was the equal to the effort, holding the ball at the second attempt.

JOSH MULLIGAN then doubled the fledgling international XI’s advantage before ten minutes were on the clock. There appeared no danger when he picked up the ball in the centre circle. However, he embarked upon a slaloming run, committing four defenders, before guiding a low shot into the bottom corner of the net from just outside the penalty area.

Jack Hodge, an international player last year too had begun well, and continued to pull the strings in the middle of the field. His long pass in the 16th minute found Josh Doig galloping into the area. The full back struck his shot well, across the Stirling goalie, but unfortunately it also crossed the byeline on the wrong side of the upright. Five minutes later Hodge fired narrowly wide from all of 30 yards after Baird had driven towards the Albion defence, but had found himself outnumbered. In 28 minutes Hodge found the same man in the area, and FINLAY BAIRD dispatched a cool finish into the net for goal number 3.

The Binos pulled one back 13 minutes before the interval. A long ball was not properly dealt with by the Scottish defence and was eventually prodded home by the lurking centre forward. Scotland ‘keeper Lee Herbert managed to lay a hand on the goal-bound effort, but couldn’t keep it out.

Scotland ended the half strongly, with neat inter-play between Hodge, Andrew and Smith culminating in Smith’s dangerous low cross being cleared at the expense of a corner.

As expected Scotland rang the changes at half time: Herbert, B. Cameron, Coll, Hodge, Mulligan and Smith were replaced by Herraghty (gk), Thompson, McConville, Meechan, L. Cameron and Daramola.

The personnel may have changed, but the pattern of play remained the same: Archie Meechan marked his arrival by bursting into the penalty box and drawing a fine save from the goalkeeper. This delayed an addition to the scoring by only a minute: Romanis shot powerfully onto the underside of the crossbar, and ANDREW doubled his tally from close range.

Two minutes later Scotland made it 5. Romanis was again the provider. His fine cross from the left found LYALL CAMERON in the area and his powerful right footed shot gave the keeper no chance.

Cameron turned provider in the 57th minute. His tricky dribble set up a chance for Tiwi Daramola. The dangerous frontman saw his effort saved by the goalkeeper. Eight minutes later Daramola must have wondered if it maybe wasn’t going to be his day. He showed great initiative to drive into the area and shot towards the target. The keeper repelled his effort, but the ball fell to Daramola who again looked for goal. Again the goalie was on hand to deny him.

After more changes saw B.Cameron, Coll, Mulligan and Smith replace Doig, Stafford, Baird and Andrew in the 65th minute, Scotland made it 6–1 just 4 minutes later. The impressive Daramola crossed to the unmarked WILSON ROMANIS who capped a fine display with a goal.

Still Scotland probed. Mulligan found Ben Cameron on the right. He fed his namesake Lyall, who shot early and found the target, but again the Stirling custodian saved well.

In the last 10 minutes there remained time for TIWI DARAMOLA to twice put his name on the scoresheet after his earlier misfortune. With ten minutes remaining he surged into the penalty area, looked to have lost the ball, but regained possession before shooting home to make the score 7-1. DARAMOLA rounded off the scoring in the final minute of play from close range after good work from Ross Smith to create the opportunity.