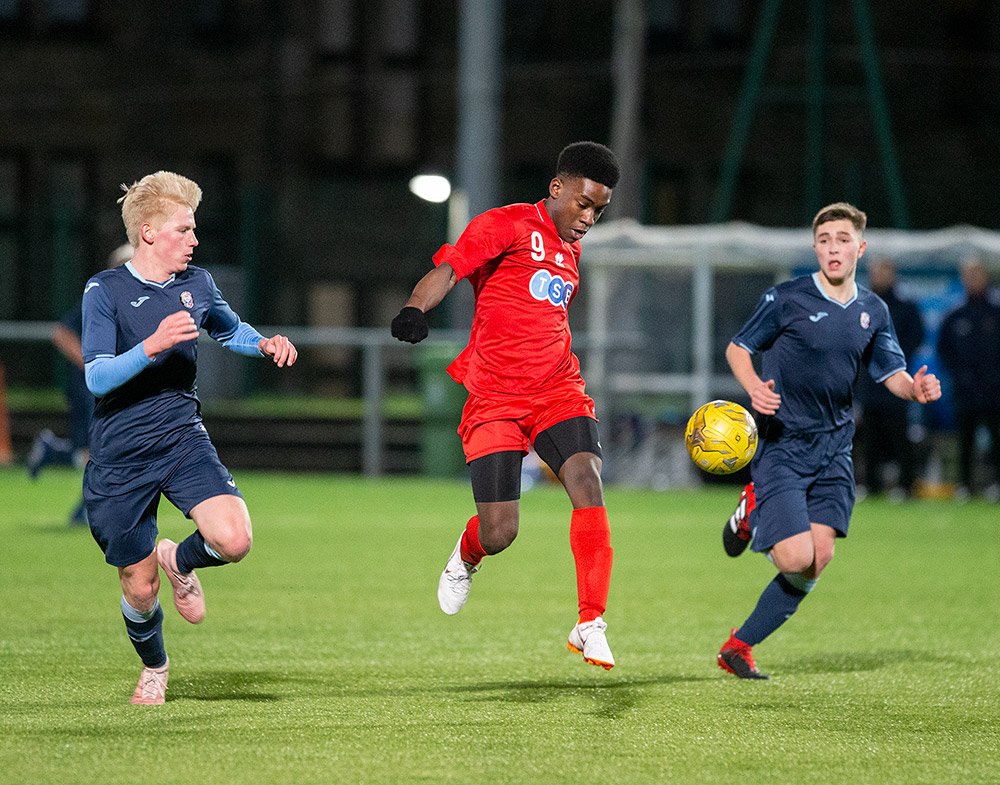 Scotland returned to Petershill for the first time in almost a decade to take on a young Partick Thistle side in the second preparation game for this season’s squad. The schoolboys were looking to follow up their recent defeat of Stirling Albion by continuing in a positive manner against the jags.

Tiwi DARAMOLA had finished the previous game by scoring twice and setting up another in the last 20 minutes of play. He was rewarded for this by starting wearing the number 9 shirt, and he wasted no time in rewarding the coaching staff for their faith. There appeared no danger when he picked up the ball on the right touchline. From there, he drove infield, cut into the penalty area whilst gliding past players. As the Thistle goalie raced from his line to narrow the angle, the Scotland forward passed the ball into the bottom corner to open the scoring in the 8th minute.

Six minutes later Scotland were creating problems in the Thistle box again. A good pass from Walker found Mulligan in the area where he was denied by a good double save from the jags’ goalie at the expense of a corner. Daramola headed Meekinson’s dangerous delivery narrowly over the crossbar.

This merely delayed the second goal by a minute. Again there appeared no danger for Thistle when Scotland goalkeeper Herraghty raced from his line to boot clear. It landed between DARAMOLA and the Thistle centre half, but the Scotland centre-forward showed tremendous strength and willingness to hold off his marker before driving into the box and lifting the ball over the diving goalkeeper.

Just when Scotland supporters would have thought that a 2-0 lead after a quarter of an hour was a dream start, DARAMOLA elevated the mood further before 20 minutes had elapsed. A flowing move involving virtually every Scotland player shifted the ball from the goalkeeper forward. Mulligan found himself free in the middle of the field around 40 yards from goal. He rounded two men and fired powerfully towards goal. The Thistle goalkeeper saved the effort, but Daramola was on hand to complete his hat-trick from close range.

The same two men were at it again at the mid-way point of the first half: Mulligan again found DARAMOLA in the area, and the forward again demonstrated good strength and awareness to hold off his marker and score at the second attempt.

Thistle tried to rally – Stafford cleared well from a dangerous chipped ball into the box, but Scotland finished the half strongly: Ross Smith shot narrowly wide from a 30 yard free-kick; Daramola and Meekinson combined to allow the latter a shot at goal which flashed over, and Hodge concluded the half by firing narrowly over after set-up play from that man Daramola.

Despite some substitutions, the pattern in the second half appeared to remain the same. Again Daramola set up Hodge, only for the captain to see his shot saved by the keeper with 50 minutes on the clock. Three minutes later Daramola was again involved: burrowing into the area to play in Walker who in turn set up Doig who saw his shot scrambled away by a desperate block.

Scotland made it 5-0 in the 55th minute. Jack Hodge turned in the centre of the pitch and played the ball in front of Ross SMITH, who was galloping down the left. His powerful left-foot strike found the corner of the net.

There then followed a more even period of the match with much of the play focused in the middle of the park. Maybe Stafford was becoming a little fed up with this deadlock, as he was booked for dishing out a hefty whack in the centre circle with 20 minutes left.

Just as the match appeared to be petering out as players tired and substitutes were deployed, SMITH helped himself to another. Three Scotland players converged upon Thistle’s last defender in the centre circle. The ball fell to the left sided man and he strode forward to finish with aplomb from around 18 yards.

Time just remained for SMITH to complete his hat-trick, acrobatically hooking Daramola’s goalbound effort into the net from close range to score number 7 on the stroke of the full-time whistle.

This was an excellent result for Scotland in preparation for their first international test: facing the Australian schools at Renfrew FC next Wednesday (25th January) at 11am.