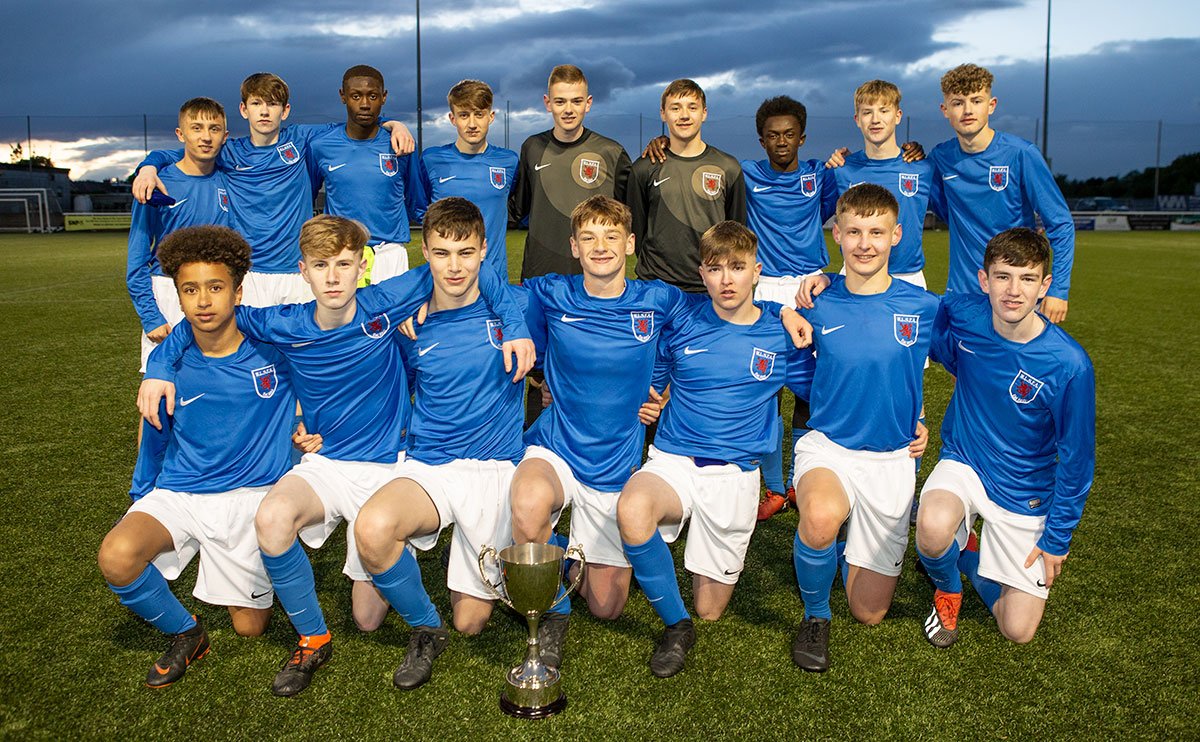 When Forth Valley SFA and West Lothian SFA met in a group stage game back in November they contested a tight match which the visitors, Forth Valley won 4 -2.

On Friday 3rd May the two teams met again in the final of the SSFA National Trophy at Ochiview Park, Stenhousemuir and a much changed West Lothian side deservedly won the game 3-1.

The Forth Valley SFA side played with great courage and kept going to the final whistle but West Lothian just edged them out in an excellent final.

Goalkeeper Thomas Elvin ( Bannockburn HS) had a number of good saves especially when he made a great block with his foot from Kamil Spaloney’s ( Linlithgow Acad) goal bound effort.

The same player, Spaloney , was to open the scoring after 24 minutes when he calmly netted from 20 yards after Elvin had blocked an effort at the edge of his box. Spaloney lifted the ball in to the unguarded net for the opener.

Forth Valley’s Gavin Hamilton (Wallace HS) showed great energy and ability as he tried to get his team back in the game but West Lothian keeper, Josh Blair (James Young HS) looked comfortable in dealing with all that came his way.

However the West Lothian side was required to substitute a defender whose over enthusiastic tackling had brought an early booking and who was in danger of being sent off for persistent fouling.

Half time: West Lothian 1 Forth Valley 0

Forth Valley opened the second half with great intent. Substitute Aaron Isaacs (McLaren HS) replaced Lewis Pincombe ( Stirling HS) but it was West Lothian who netted the important second goal of the game – and what a great goal it was.

Mid fielder Murray Thomas (Linlithgow Acad) gathered the ball on the half way line and with a great inter-passing move and great control he reached the edge of the box. His strike, curling in to the far corner, was unsaveable and lit up what was already a very good game.

Forth Valley, whose team had representatives from eleven of their eighteen member schools, had shown great character throughout their run to the final and they showed this once again as they fought to get back into the game.

Substitute Aaron Isaacs ( McLaren HS) scored in what was a replica of West Lothian’s first goal.

When the ball broke to him at the edge of the box Isaacs clipped the ball home from 18 yards out for a clever goal.

Forth Valley then pressed for an equaliser and West Lothian were definitely under pressure.

Lornshill Academy player Lennon Reid was giving his all in search of driving his team forward but his over- zealous attempt to tackle an opponent in the box resulted in referee,( Danny Graves), pointing correctly to the spot.

Forth Valley kept going to the final whistle and used all their fit substitutes but West Lothian remained in control to the full time whistle.

West Lothian captain Josh McCulloch (Bathgate Acad) who had an excellent game received the cup from SSFA President, Andy English at the end of a very entertaining and well contested final.