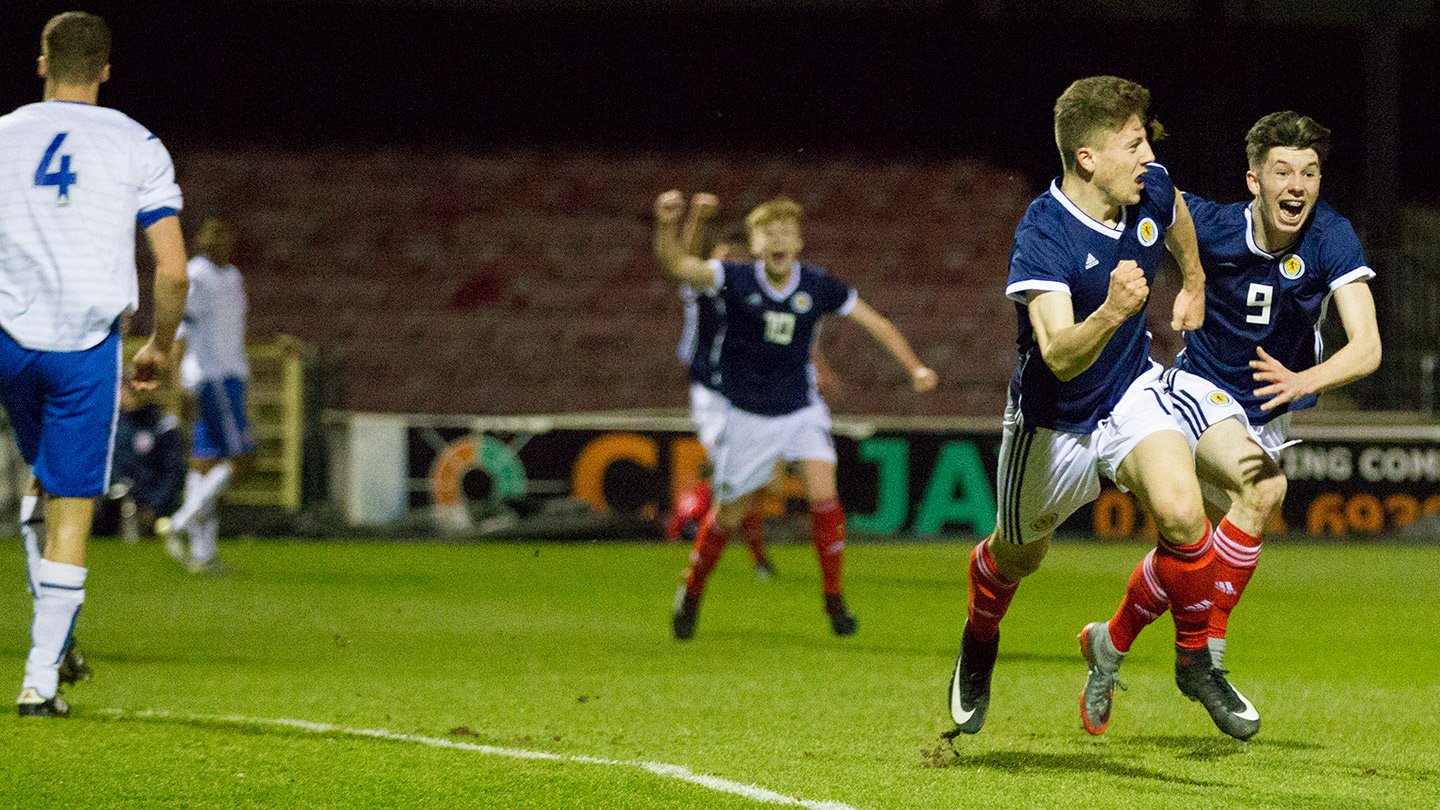 Scotland travelled to York City’s Bootham Crescent Ground knowing that a victory would place them joint top of this year’s very tight Centenary Shield table. History, though was against the Scots – not since 2000 had the Senior Schoolboys won in England.

With this in mind, it was perhaps no surprise that the hosts started more strongly, with both Scotland central defenders called into action in the opening 5 minutes.

Scotland settled down around the ten minute mark, and there followed an excellent spell for the visitors: Declan Walsh found Gavin Scott in space, but just as he looked to run through on goal he was adjudged to be marginally offside.

However, the next big decision went in Scotland’s favour. Daniel MacKay (who would feature at McDiarmid Park for Inverness Caledonian Thistle’s Irn Bru Cup Final the following day) jinked into the box. When he was upended by a combination of Brookes and Doyle, the referee Seb Stockbridge had no hesitation in pointing to the spot. MacKay dusted himself down to take the kick himself. He shot low and hard to goalkeeper Cameron Coulter’s left, but the Englishman made a fine diving save.

From the resultant corner Aidan McKeown delivered a deep cross where MACKAY immediately made amends for his miss from the spot with a prodigious leap to nod the ball into the net with 18 minutes on the clock.

England tried to hit back immediately and had two dangerous attacks on the 25 minute mark.

Firstly Jackson found King Baidoo with an excellent cross. The forward’s glancing header was narrowly wide. Sam Walker was then vigilant in defence to repel a fine low centre by the aforementioned Baidoo.

With half an hour gone, Scotland created a succession of chances. Firstly Gavin Scott was fouled just outside the English penalty area. Unfortunately, Reece Rintoul’s shot was blocked by the English defensive wall.

In the third of a trio of chances Rintoul’s early ball found Scott galloping down the right hand side. Scott’s low cross in search of Jack Hodge was just cut out by Adam Crowther.

Play surged to the other end and an excellent pass from Ryan Penny found the lively Baidoo in space on the left hand side. His low cross only just evaded Harvey Howell, who had charged into the Scottish penalty box.

The game continued to move from end to end, and a dangerous Jack Hodge ball was deflected behind before Cieran Jackson and Cormac Pike exchanged passes to allow Pike a shot on goal. This appeared to have beaten Elliot Anderson in the Scottish goal but a determined Cameron Clark appeared to block, then clear the ball from in front of the Scottish goal-line.

On the stroke of half-time David Neligwa replaced Harvey Howell for the hosts.

Scotland made a change at half time with Aidan Kemp replacing Jack Hodge, whilst England made another: Fraser Colling replacing Ethan Brookes.

Kemp was involved immediately – heading a Rintoul corner narrowly wide with almost his first touch of the ball.

The next 20 minutes was rather scrappy stuff – play was punctuated by substitutions and bookings.

Arguably the two most inventive players afield, Scotland’s MacKay and England’s Baidoo were yellow carded within 5 minutes of each other, both allegedly for simulation. This seemed a trifle harsh given some of the rough stuff both players had encountered in the first half.

There were also a number of changes: England replaced Emmanuel Ogunrinde with Jack Butler, whilst Scotland brought on Ben Harwood and Nathan Fell for Sam Walker and Gavin Scott respectively.

Just after Fell’s introduction in the 67th minute a dangerous Neligwa cross was repelled by a combination of Brown and McKeown. This was an example of the resolute type of defending Scotland could produce when it mattered.

Such defending was making the England team and supporters increasingly frustrated.

This seemed apparent when England Cormac Pike was ordered off for taking out Nathan Fell with a wild two-footed lunge with 18 minutes remaining.

Rintoul then followed the England captain into the referee’s notebook when he was booked for an innocuous looking challenge in the middle of the park.

Scotland seemed set to look to try to hold on to what they had when introducing central defender Gavin Watt for wide-man MacKay in the 81st minute, but there followed a remarkable series of end to end play.

England had perhaps their best chance of the evening when a long free kick by Noah Smerdon was headed over by Butler (who had been perhaps distracted by Scottish keeper Anderson steaming off his line.)

Scotland’s substitutes then combined twice to dangerous effect. With 86 minutes on the clock Fell broke forward to feed Harwood inside the penalty area. The big front-man’s effort wrong footed Coulter in the England goal, but cannoned to safety from the keeper’s right hand post.

Scotland – and this double act – were not to be denied. With two minutes from an additional six having elapsed, Harwood showed good strength and awareness to lay the ball to him diminutive colleague. As a tiring English defence retreated, FELL drew back his left foot and thundered an unsaveable shot into the top corner of the English net.

The Scottish players collapsed together in a heap on the turf, delighted in the knowledge that this would clinch only their second 21st century victory on English soil.