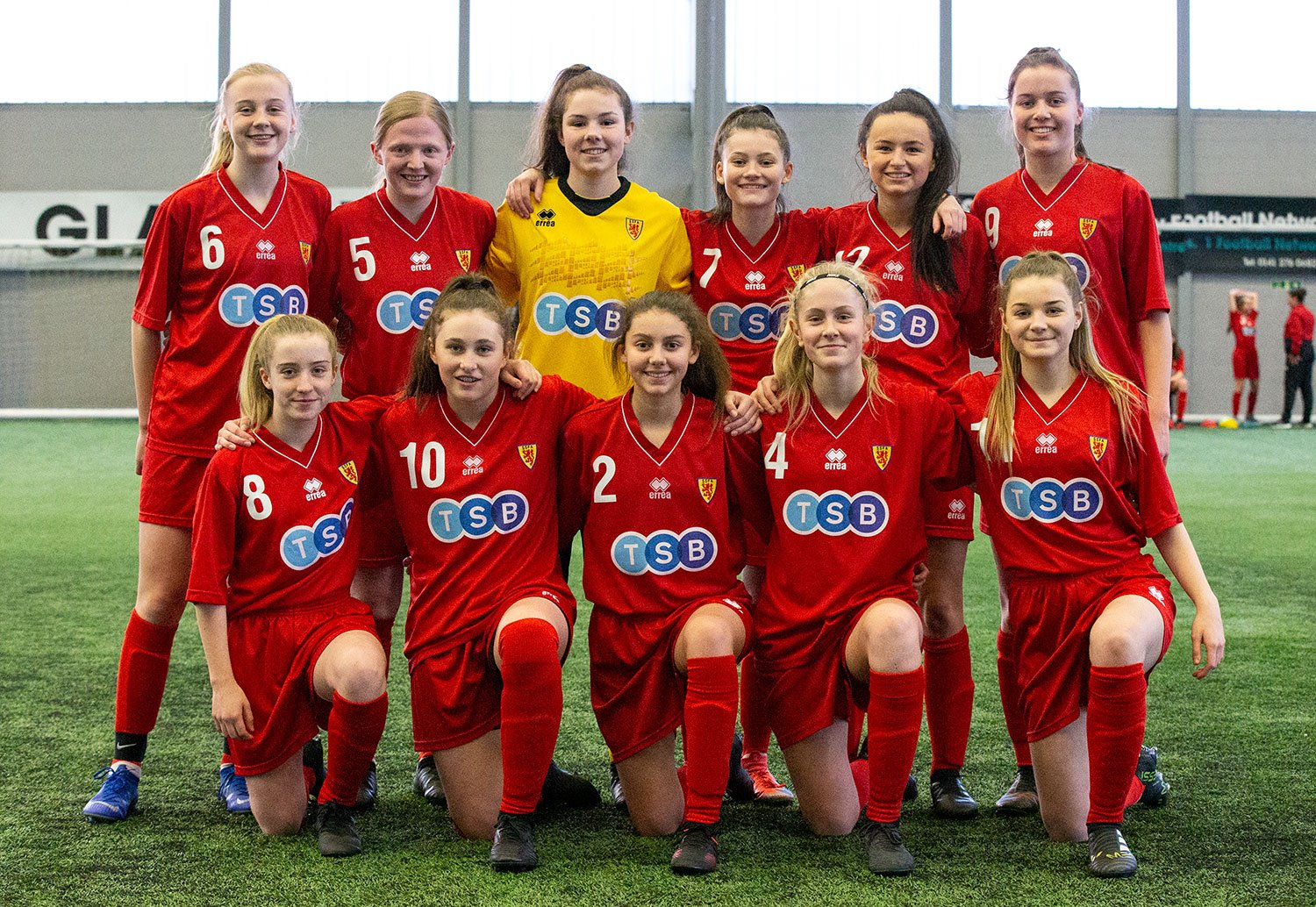 The second of the preparatory games was played indoors at the Toryglen Football Centre with the Scottish Schools’ U15 team playing against Rangers.

This was an annual fixture and has always been a very close encounter and this year was no exception.

The Scots started with Katie in goals and a back four of Addie, Tegan, Rosie and Maria. Abbie was on a school trip and both Jess and Niamh were nursing injuries. Dion unfortunately had not recovered from her injury in time for her to be considered for the game. Kiera was also out of action for the game due to a wrist injury.

However, it was great to see Eilidh and Elvie back and available to play today.

The midfield was made up of Olivia K, Kirsty, Hannah and Aimee with Olivia P partnering Eilidh up front.

The game started slowly as both teams attempted to play themselves into the match. The teams appeared to cancel each other out with very few chances being made in the early exchanges.

Aimee worked hard on the left-hand side but was unable to provide a telling final ball when she had made positive inroads beyond the Rangers full back.

Maria provided some excellent deliveries from the full back position, attempting to link with both Olivia P and Eilidh but again the timing of the runs were just too early on a couple of occasions, however this positive direct gave the Scots the confidence to dominate the possession of the ball.

Rangers were battling and closing the space down around the middle of the pitch and in their own defensive third.

They were making it very difficult for both Hannah and Kirsty to pick a pass to either Olivia P or Eilidh who were coming shorter to try and receive the ball.

The number of defenders in this area stifled the creativity from the central players and it was only when the ball went wide did we see the attacking strength of Scotland.

However, the Scots still attempted to pass their way through the defenders and the two banks of defenders that Rangers had rigidly set up.

There were few attempts at goal from both sides in the first period with the Rangers keeper making routine saves from Aimee and saving comfortably with a long-range effort from Hannah.

The back four in front of Katie were very comfortable with the few attacks that Rangers made with both Tegan and Rosie looking very accomplished in dealing with anything that the lone striker attempted.

The Scots looked better when they played the ball quicker and got the wide players in Aimee and Olivia K on the ball. They worked well with their full backs along side them as they went in search of the opening goal. They combined well on several occasions but the final ball or shot at goal just did not fall for the strikers in this period.

Scotland pressed the ball and forced Rangers into mistakes at the back but on this occasion, they could not get in front before the referee brought the first period to a finish.

Elvie came on at the start of the second period along with the skipper for this year Jess. It was great to see both girls playing for the first time in this campaign.

The second period started in the same vein as the first with the Scots in full domination of the ball.

Elvie took up where Hannah had left off and attacked the defenders of Rangers. She ran positively at the retreating back four but with so much congestion in front of her, it was becoming frustrating for the forward players.

Kirsty’s usual guile and endeavour carved out the best chance of the game to date. She dispossessed her opposite number after a successful high press had forced a hurried pass. Kirsty quickly picked out Eilidh with a perfect pass, however Eilidh’s attempted lob agonisingly went just passed the post.

Maria in her more advanced role took the more direct route and started to take aim on the Rangers goal. She was very unlucky with her first attempt from distance early in the period. She received a through pass from Tegan and instantly thought of turning and shooting for goal. As it left her foot it looked in all the way, but it just cleared the crossbar.

Addie also had the confidence to take on the full back. She and Jess combined very well to get Addie away and clear, her cross was into a lovely area, but Aimee just mistimed the shot and pulled it wide of the target.

It was a more positive series of play as the ball was moving quicker from the middle third to the front third with wide players and full back getting more involved.

The shots and dangerous crosses were more frequent as the Scots camped out in the Rangers half indeed Gail who had come onto replace Katie only had a couple of back passes to attend to before the referee brought the second period to a close.

Hannah attacks the Rangers back line.

The third period started with a change in personnel and formation. The Scots had again dominated possession in the previous period and deserved to be ahead on the day.

The Rangers keepers had saved anything that had come their way and the shots to this stage had been either well dealt with or had cleared the uprights.

If the shots did not clear the bar, then they rattled it. Maria was so unfortunate as she crashed her shot against the bar as another well struck shot beat the keeper all ends up. It looked like it was going to be one of those days as the keeper was well beaten but the ball bounced down and away from goal.

The best save of the day went without doubt to the young Rangers keeper minutes later.

The ball had been played in and around the Rangers box as Eilidh slipped the ball to Olivia who blasted the ball goalward. The keeper stood tall and expertly deflected the ball over the bar. It was a fantastic save that brought the crowd to their feet in admiration.

The game played out in the Rangers half but even although Jess hit the bar again before the end of the match, it was always going to be a back to the wall performance from Rangers and a frustrating afternoon from the young Scots.

The preparatory games are exactly that, preparing the players for different types of opposition.

It was a frustrating game in many ways for the young Scots, but they will meet teams who, like today’s Rangers team, work hard for each other and back each other up and dig in when they have to.

With a little bit of luck in front of goal the result may have been different, but it was another important game in the development of this young Scottish squad.

The Scots have two more preparation games in March as they move to the East to play both Boroughmuir and Hearts before their International friendly with Northern Ireland on the 30th at Stranraer FC.