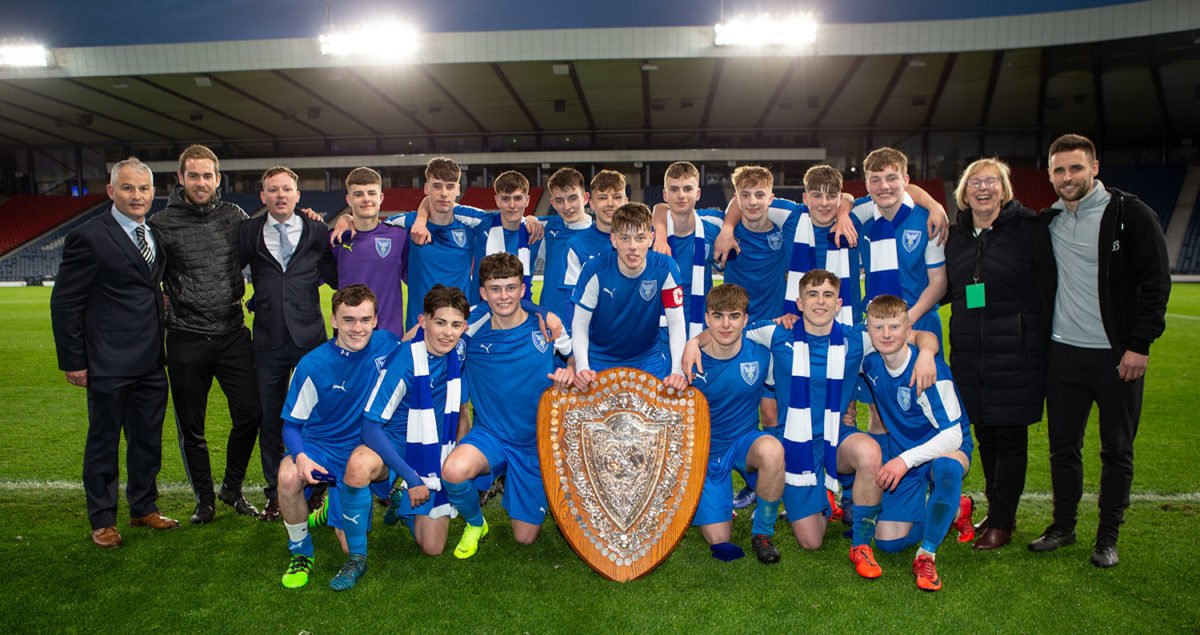 Falkirk school, Graeme High School were leading with a first half goal when the 80th minute showed on the large screen. They must have thought that their second half rearguard action would prove successful and that they would be the team that would hold on and win the prestigious competition that started out with 165 teams entering.

Graeme High School opened the scoring with a few minutes left before half time, full back Martin France drove in to the opposition box his perfect cross ball was knocked home by SSFA internationalist Wilson Romanis which gave them a 1-0 lead.

There was little between the two well organised teams who were both playing stylish football as half time arrived.

However it was St John’s who found the energy and the desire to bring about a dramatic turn around with three goals in the final ten minutes.

Graeme High keeper Luca Sandberg parried out a cross ball from the left and when he rushed out to try to recover the ball his challenge from behind brought down the St John’s forward.

Referee Blair Comerford pointed to the spot and schoolboy internationalist Archie Meekison confidently stroked away the kick to bring the score level.

Only minutes later Meekison played a fantastic pass to play in team mate Grady McGrath. He too beat keeper Sandberg with a calm finish to put his side ahead.

When, with only minutes to go, Lyall Cameron, also a schoolboy cap, netted for the Dundee team with a well placed shot it looked all over but more drama was in store.

Both sides made multiple substitutions as time ran down.

Graeme High showed great resolve to score again when Ryan Fleming netted from close in to make the score 3-2.

SSFA President Mr Andrew English presented the medals to all players and officials before handing the trophy to StJohn’s captain Ross McNaughton.

The game which was played in the excellent manner expected was watched by 11 members of the Cumnock Academy team who won the Senior Shield fifty years ago in 1969.

The past players and other guests enjoyed a pre match meal ahead of the game and all enjoyed a first class final played between two excellent teams at a glorious looking National Stadium.