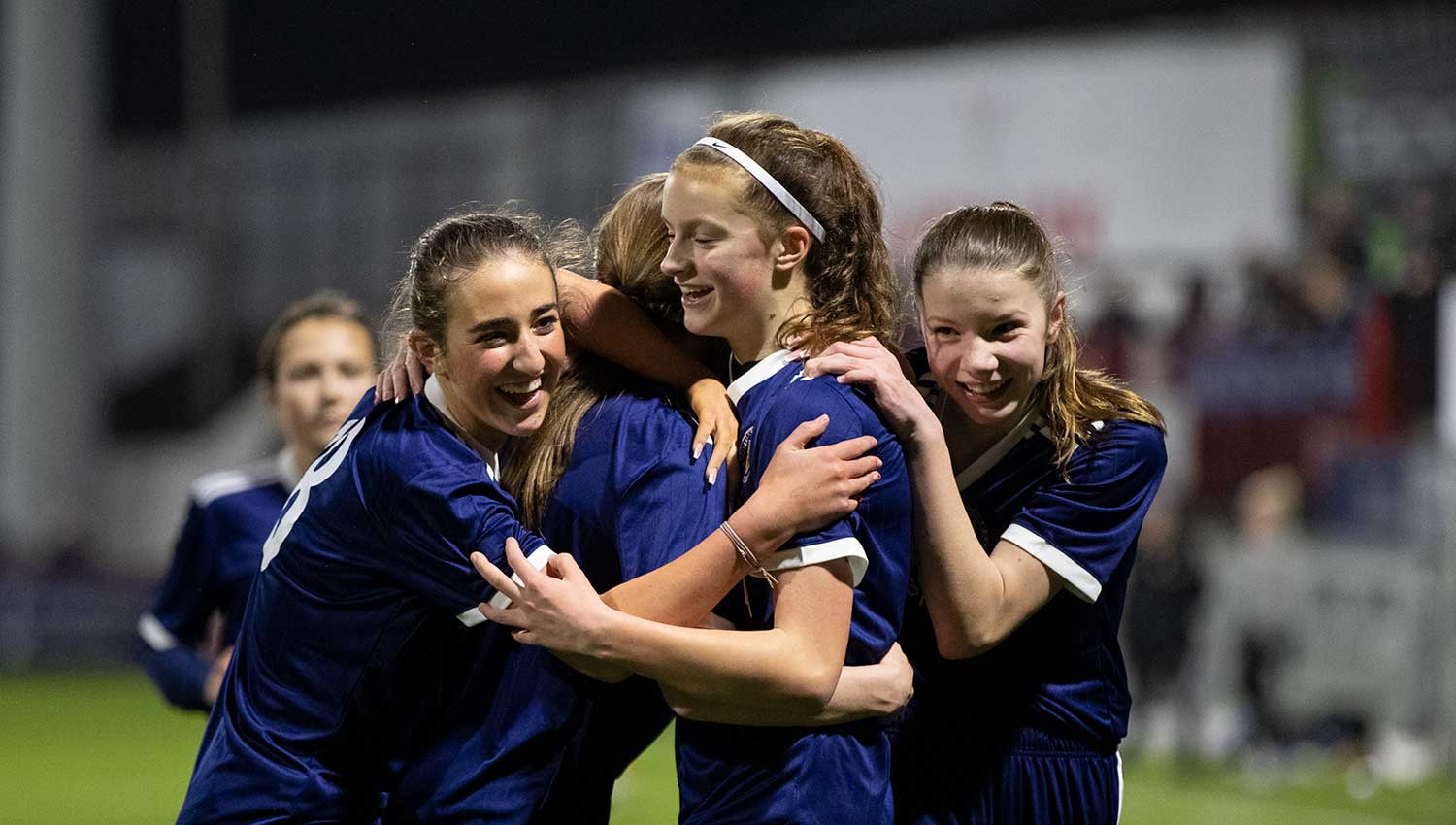 Scottish Schools overpower Northern Ireland with an impressive second half display to run out winners in friendly International in Larne.

After the high winds and rain of the sea crossing, the weather at Inver Park could not have been more welcoming. A mild, dry, windless evening welcomed the girls to the magnificent Inver Park, home of Irish Premiership side Larne Football Club.

The girls had time to look around the surroundings and take a few selfies before starting their warm-up. Another Scottish Schools tradition was undertaken when vice-president Gillian Duffy handed each girl their International top to mark their International debut – a tradition the SSFA had been carrying out since the first Girls International match in 2000.

As it was a full international,  the intention was to play the entire squad in order to get all the girls experience of playing at this level.

The starting eleven for the game was Erin Halliday in goal, a back four of Lily Boyce, Kate Fraser, Olivia McStay and Millie Paton. The midfield consisted of Lucy Barclay, Sophie Black, Gigi Bradford and Holly Daniel. Up front were Laura Berry and Sophia Martin.

Scotland kicked the game off and attempted to push Northern Ireland back. The Northern Ireland side, who has already played two internationals, looked strong and confident on the ball. Scotland, in the early stage of the game, were moving the ball about, but not making any impression on the well organised Irish defence.

The Irish team, on the other hand, were very positive and direct with their attacks.

In the fifth minute Ireland opened the scoring. They started an attack from the left back position. The ball was played inside, then after a series of one touch passes the ball was played through to their number nine who lifted the ball over the advancing Erin Halliday and into the far corner of the net.

Three minutes later Scotland equalised. Northern Ireland were caught out when Laura Berry intercepted a pass out from defence and moved the ball to Holly Daniel. Holly drove inside the Irish box and although surrounded by two defenders, smashed the ball passed the advancing keeper into the net from eight yards out.

That goal settled the Scottish girls and they stared to pull together a number of passing moves. Sophie Black and Gigi Bradford were combining well and were starting to take control back from the Irish midfield.

Despite this improvement passes were still being forced and going astray too often. On a plus Millie Paton was combing well with Holly Daniel down the left wing and causing problems with the Irish defence.

Laura Berry and Holly Daniel both had shots on goal but both attempts finished high over the bar.

In the 21st minute, somewhat against the run of play, Ireland took the lead once more. A high cross from the right was not held by Erin Halliday and the Northern Ireland number nine took advantage of the loose ball to hammer it home from two yards out.

25 minutes into the game Scotland were looking good down the right. Lily Boyce and Lucy Barclay were combining well with Sophie Black to get behind the Northern Ireland defence.  But still that decisive pass was missing due to the Scottish players still trying to force the game rather than use their skills to open up the Irish defence.

Three minutes later Scotland made it 2-2. Scotland broke on the left. Millie played a pass wide to Holly who cut in and beat a defender. The Irish centre back intercepted Holly’s pass, but Laura Berry nipped in to take the ball off her, then drove forward and played a lovely reverse pass to Sophia Martin who had lost her defender with a carefully times diagonal run into the Irish box. Sophia took one touch and smashed the ball high into the net. A well created and executed goal.

Northern Ireland continued to attack down the wings, but the Scottish defence stood strong.

In the 31st minute Ireland took the lead again. Scotland lost possession from a bye kick. The Irish midfielders played a quick one-two and moved the ball into the feet of their number 10 who pivoted, beat two defenders and fired a shot high over Erin Halliday into the net.

This goal gave Ireland confidence, and they were now playing an excellent pass and move game, especially between their number eight and ten.

One such passing play brought out an excellent save from Erin Halliday diving to her left to prevent an almost certain goal.

Two minutes from half time a great move started with Lucy wide right, passed to Sophia , who then moved the ball left to Millie who in turn moved the ball inside to Holly. Holly took a shot from 18 yards only for the ball just to clear the bar.

Scotland started the second half much more positively. Their movement was faster. Their passing was much more accurate. A change in tactics saw Scotland getting into much higher positions, exploiting the speed and power of both Sophia and Laura running behind the Ireland defence.

In addition, unlike the first half, they were giving Ireland no time to settle on the ball, disrupting their build up play.

Sophie Black and Olivia Chomczuk were dominating the midfield, cutting the Irish defence apart with playing some superb passes.

In the 48th minute Scotland drew level. From a stalled attack on the right the ball was played inside to Olivia Chomczuk who turned and moved the ball wide left to Mia Scott. Mia drew two defenders and played the ball forward for Lucy to run onto. Lucy beat a defender, cut inside another two and fired a great ball into the Irish box for Sophie to pounce and smash into the net. A great team goal.

Before the restart another three substitutions were made: Bella Conreno came on for Lucy Barclay, Sophie Timlin came on for Sophie Black and Freya Brien replaced Holly Danie.

Scotland, with refreshed legs, continued to play a high pressing game. They gave Ireland no time on the ball, closing them down and, in midfield in particular, Sophie Timlin and Mia McArthur, worked hard to deny Ireland space.

In the 56th minute Scotland took the lead for the first time in the game. Scotland break down an Irish attack and Sophie Martin  played a through ball, from inside her own half, for Laura to run onto, go round the keeper and smash into the empty net.

In the 62nd minute Bella Corona was played in after a throw in on the left. Bella cut inside and fired a great shot in only to be denied by an equally great save by the Irish keeper.

Scotland added a fifth in the 71st minute. Freya Brien intercepted a pass out of defence and seeing the Irish keeper off her line quickly lifted the ball over the keeper into the empty net. Great quick thinking on Freya’s part.

A minute later Emme Thomson pulled off a great save diving at the feet of an onrushing Irish forward to prevent an almost certain goal.

Northern Ireland continued to attempt fast breaks to get a goal back, but Kate Fraser and Olivia McStay were alert to any danger through the middle.

Scotland’s final goal of the game was scored four minutes from time. In an almost repeat of the fourth goal, Sophie Martin played a through ball for Laura Berry  to run onto.  Laura evaded the keeper and fired the ball  into the net.