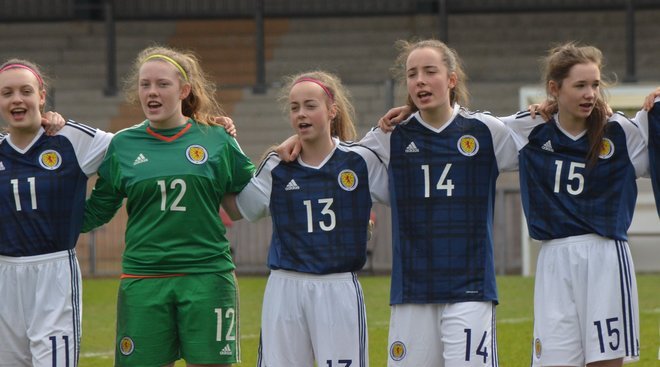 The Bob Docherty Tournament (U15 Girls)

There was a buzz of excitement as the teams came out for the third place game on the Monday morning as Scotland played against the hosts Wales at the Newport Stadium.

The Scots were out to show the large crowd exactly what they were capable of. If the singing of the National anthems was anything to go by then the Scots were going to be hard to beat.

Both of the wide midfield players in Kirsten Laing and Jemma Marriott had early chances, both of whom had combined expertly with the lone striker Naomi Welch, but neither could get their shots away towards goal. Naomi herself was very unlucky when she powered through the Wales defenders to create a chance for herself, but on this occasion she saw her cross-shot flash across the goal.

This however was just a sign of things to come from the exciting Scots striker. The Leah and Leah full back combination on either side (Eddie / Fleming) took every opportunity to drive forward and combined with the players in front of them time after time. It was great to see the positive attacking prowess of both players.

The attacks from Scotland were coming in waves in the early stages of the game where the players noticeably had their confidence back. They passed the ball with a slickness and pace that was missing in the previous game.

The decision-making and movement was there for all to see and it was only a matter of time before the breakthrough came. Leah Eddie sent in another teasing cross that on this occasion was palmed out by the keeper only for the ever alert NAOMI WELCH to head the ball into the net, 1-0 (14m). Moments later Naomi again latched onto a through pass from Sara McWhirter that she instantly diverted towards goal only to see it agonisingly go past the post. 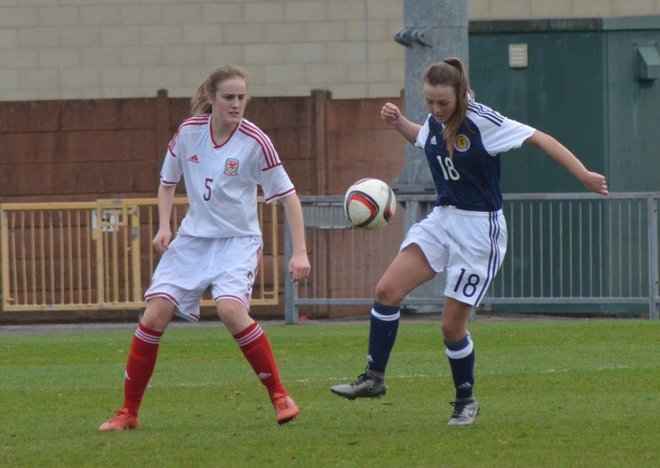 In a rare Welsh attack Ciara Pollock came bravely out at the feet of the onrushing striker to save at the edge of the box. She was determined to uphold her personal series of clean sheets for Scotland.

As the half was unfolding it was Scotland who were in total command with Sara McWhirter in the holding role dictating the play against the previously influential Welsh captain. Sara once again won the ball and set up yet another attack. As the ball was played into the right-hand channel it was chased down by NAOMI WELCH. She bravely and strongly held off the Welsh defender and as she looked up she realised that she was isolated. She proceeded to attack the box and unleashed a ferocious drive from what seemed an impossible angle into the roof of the net. It was a fantastic individual goal that was fully appreciated by her team mates and the large assembled crowd, 2-0 (30+1m).

As the halftime whistle sounded the girls were clapped and cheered off by the parents and supporters of both teams. It had been an excellent first half played in the right spirit by two quality footballing teams.

The second half started with the young Scots looking to add to their advantage with their confidence and desire to go forward. After just six minutes of the second half NAOMI WELCH got the hat-trick that her performance deserved. She showed great persistence in holding off two Welsh defenders to calmly slot home past the helpless Welsh keeper, 3-0 (36m). It is a fantastic achievement at any level to score a hat-trick but it makes it even more special in an International match when you are wearing the Scottish blue (or pink !). 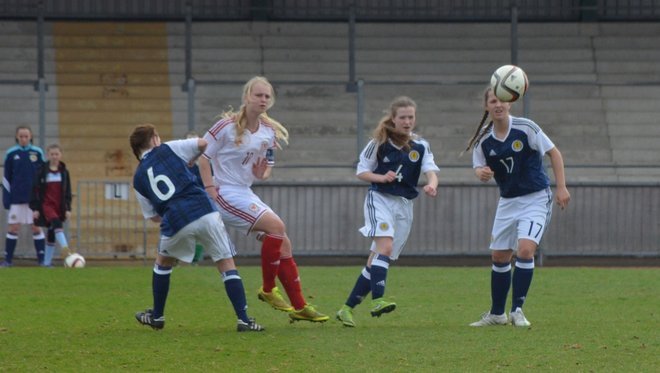 Despite losing this third goal the Welsh kept working forward towards the Scottish goal but in Georgia Adderley and the consistently impressive Tara McGonigle their attacks were quickly snuffed out. The full backs in Kara Chalmers on the left and Cara Henderson on the right kept Scotland going forward and both defended vehemently to keep the well-deserved clean sheet and Jade Baillie’s goal intact as well as getting forward when the opportunity arose.

Scotland killed off any chance of a Welsh comeback with an excellent 4th goal. Another exciting passing move appeared to be over before the persistent chasing down of the ball by Kirsten Laing changed that. She chased the Welsh player down and tackled her to win the ball on the right-hand side; her pin-point cross into the danger area was controlled by MICHAELA McALONIE who expertly drove the ball into the goal with her left foot, 4-0 (49m). This signalled a mass celebration for the popular midfield player. 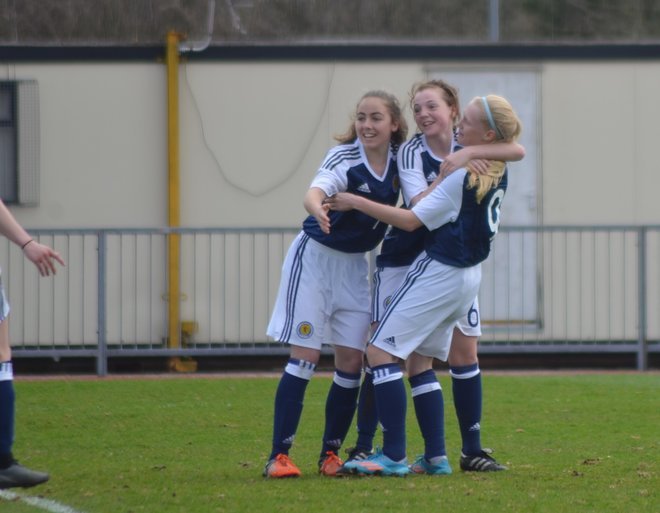 The Welsh gave it one last push as the game was concluding but a fine initial stop by Jade Baillie and a goal-line clearance by the excellent Tara McGonigle kept another clean sheet for Scotland. 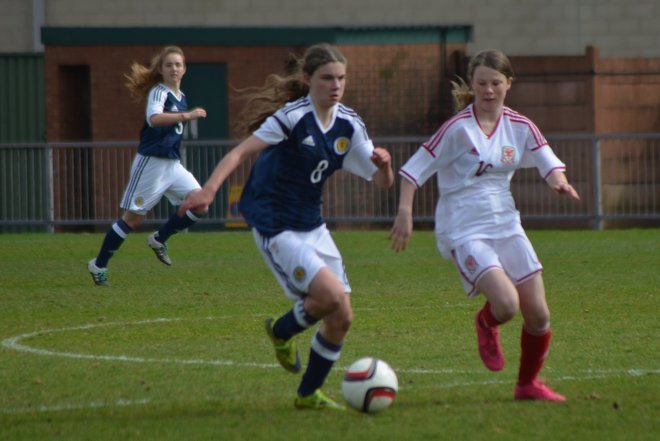 Kirstie McIntosh ran (500 miles) for the Scottish cause and set up Morgan Cross for one more attempt on the Welsh goal, however the ever-willing striker saw her shot just fly past the left upright.

The referee brought the final curtain down on this SSFA squad with another win and clean sheet for this talented group of players. The delighted Scots celebrated together with parents, supporters and with each other. A third place finish with the highest number of goals scored in the tournament with ten and only two against was a fantastic achievement.

The next time they will meet up is for another memorable experience when they receive their SSFA International caps. We wish them all the very best for their football and academic futures but at this stage we thank them for the way that they have represented this association and Scotland.

England beat Republic of Ireland 1-0 in the final to lift the trophy.

The records of the teams participating were :

Scorers for Scotland were :