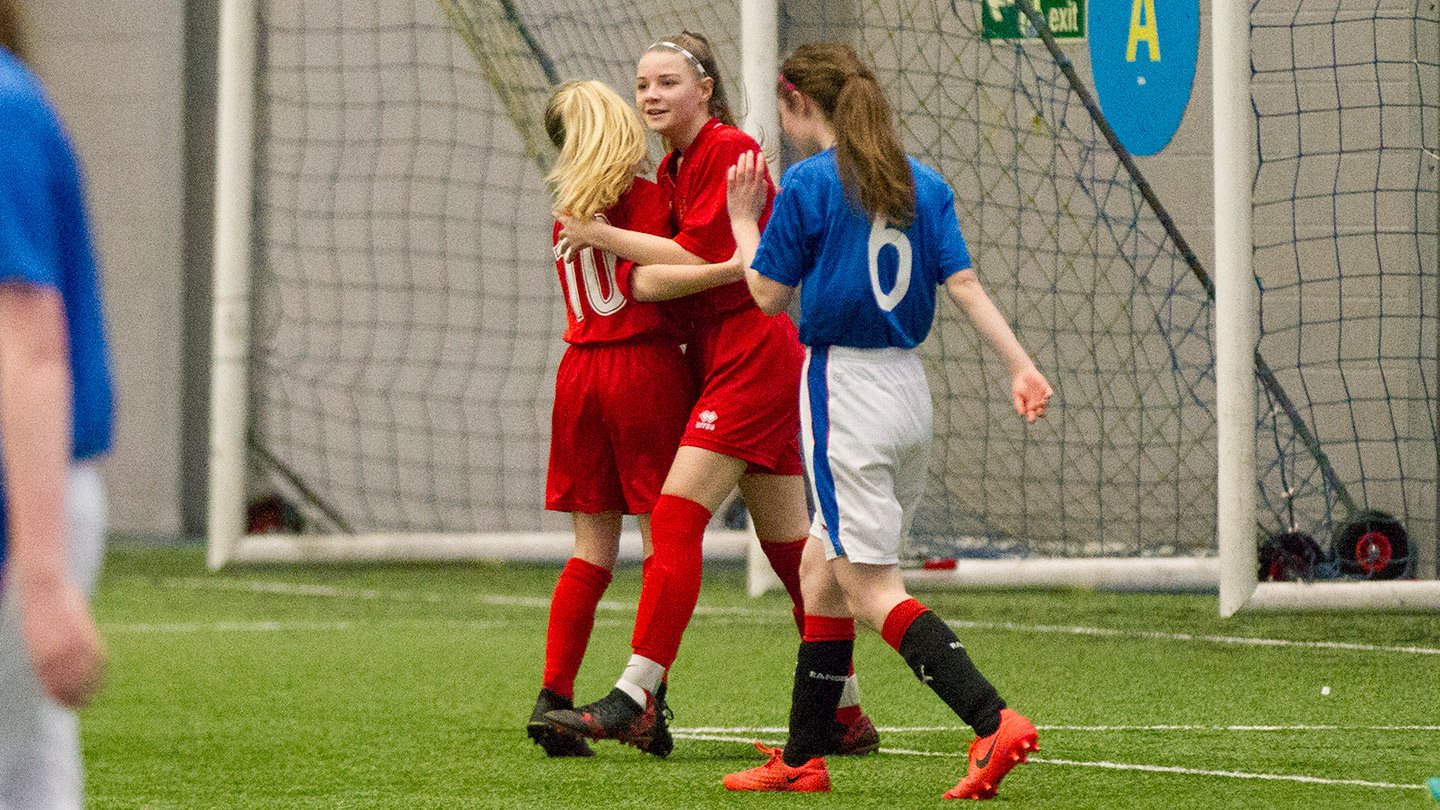 Rangers Beaten on the Double

After a very successful trip to Wales, it was back to ‘domestic’ business for the U15 Schoolgirl squad against Rangers today, playing indoors at Toryglen in Glasgow.

The big indoor pitch must have felt far more comfortable than the ‘gales in Wales’ as the game kicked off in front of an expectant crowd.

The early exchanges were very even with limited chances for both teams.

Maria had come back into the squad and was looking to assert herself against her opposite number in the early exchanges.

Indeed, it was from one of her pinpoint deliveries that produced the first chance of the game, however on this occasion Rosie just failed to get on the end of the dangerous cross.

Both Mirin and Ellie Jai were also driving forward on the right-hand side pushing the Rangers defence back into their own defensive third.

A delightful combination from Kirsty and Rosie were very unlucky not to set up Olivia bursting from the middle at this early stage for the Scots who were looking for a goal to settle the team into the passing patterns that they had demonstrated in Wales.

However, at this early stage the resolute Rangers defence stood firm.

The young Scots were trying shots from distance and both Kate and Rosie were unlucky with powerful shots that the keeper did very well to hold.

Alicia in the Scottish goal did not have too much to do at this point but looked confident in dealing with anything that was delivered into her penalty box.

Robyn and Jenna started the play from the back and were able to let both Lynsey and Mirin drive forward.

The Scots made changes from twenty-five minutes into the game as the emphasis on the need for a full fit squad for the tournament was reiterated.

Indeed, it was from a combination from two of the new players in Rebecca and Eilidh that produced a delightful ball to the left foot of Rosie. The result was inevitable as she struck a powerful shot into the top corner.

It was just what the team deserved for their endeavours in the first period.

The strong running Eilidh set the Rangers defence a new challenge with Rosie playing off her.

Rebecca was now running the middle of the pitch playing and probing little passes into difficult areas for the defenders.

Gail replaced Alicia in the goal and was called into action early from a speculative shot that she held with confidence.

The back four was changed with Mirin shifting over to the left. Jessica came in at right back with a new central partnership of Paige and Monica.

The game again took a little time to settle with the changes but again the Scots took control of matters and began to play in with a purpose.

However, it was noticeable that passes were being forced at times and chances were snatched at.

The half time whistle sounded with the team well worth their one goal lead but feeling frustrated with the lack of a bigger lead that they had deserved.

The team changed formation in the second period with a back three of Paige, Jenna and Robyn forming a strong defensive unit in front of Gail.

Maria and Jess played in the wider berths with Rebecca, Kate and Monica forming the middle three with Kirsty and Bayley up top.

The powerful direct running of Bayley gave the Rangers defence problems from the off. She showed a desire to get onto every ball that was played forward to her.

It was great to see the hunger to get into the box and make things happen.

It appeared that it would only be a matter of time before a second goal materialised and that was indeed the case.

Rebecca combined with Monica on then right-hand side and sent over a wonderful deep cross to the back post that eluded the whole defence. Maria had timed her run to perfection and expertly volleyed the ball past the keeper.

The Scots huffed and puffed at times but could not blow the Rangers away in the final stages of this keenly played game.

The Scots were always on top and camped out in the Rangers defensive third but could not add to their tally on the day.

It was another good victory for the Scotland squad with combinations and formations given a run out against a compact well organised defence.

The squad have a training session and then two further games against Glasgow City and then Hibernian FC before they go to Belfast for their challenge to win the Bob Docherty Cup again.