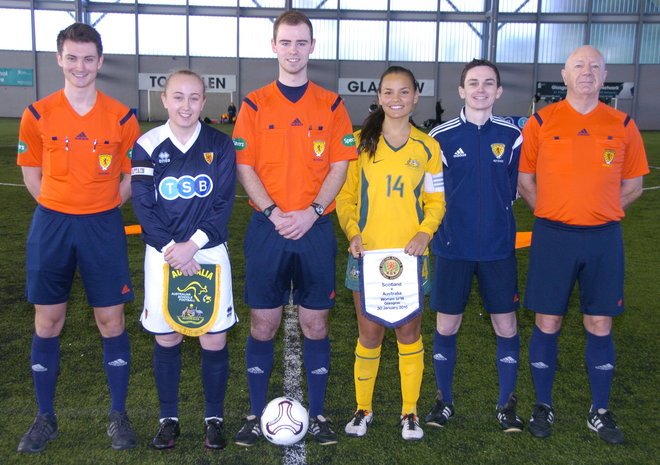 The first ever TSB schoolgirl International Under 18 match took place on Friday 30th January indoors at Toryglen against Australia with a 10.15 kick-off.

The game was the first in an U18 double-header against Australia, to be followed by the lunchtime kick-off in the boys game.

The Scotland squad was made up of players who had been part of recent U15 squads and had enjoyed great success wearing the dark blue. 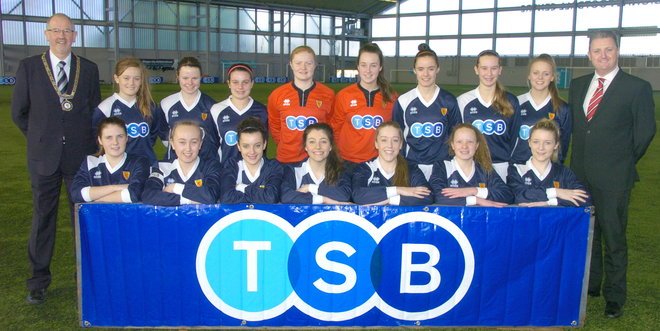 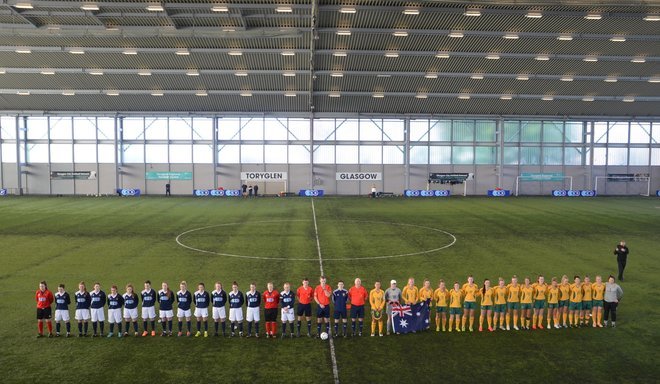 The game kicked off with the Scotland girls in the ascendency from the outset. Building from a very solid back four through the talented and creative midfield Scotland could not quite find an opening with the athletic and determined Australian defence holding firm. The Scottish attacks were mounting in intensity and frequency with Chelsea Cornet and Haylie Sinclair finishing off excellent moves only to be denied by fine saves from the Australian keeper. 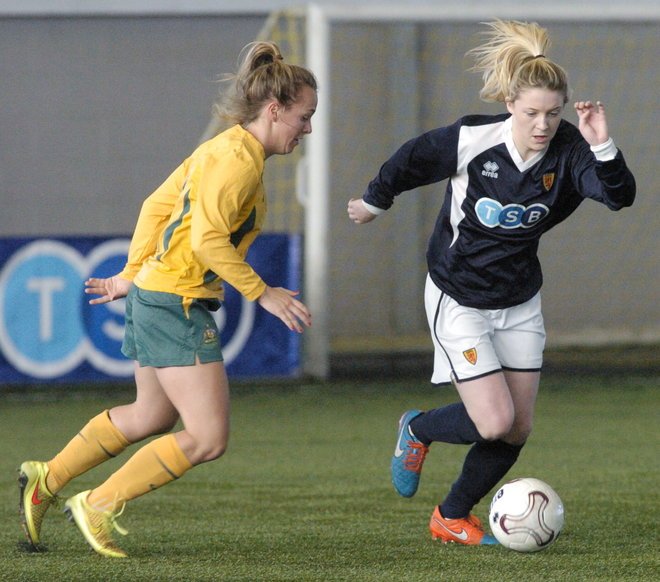 The pressure was mounting with wave after wave of Scottish attacks finally making the breakthrough which came after 25 minutes. A corner on the right was flicked on from the near post to the back post where Courtney Whyte was on hand to head home expertly to the delight of her team-mates and the large crowd of supporters, 1-0. 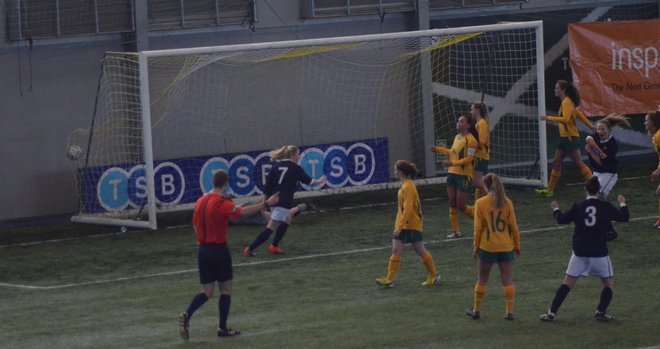 nspired by this goal the Scottish girls created some further excellent attacks from the midfield, the best of which had Amy Gallacher thwarted by the increasingly overworked Aussie keeper. The only resistance came from the Australian left winger Olivia Gurney who had both the power and skill to create some opportunities for the Australian attack. Scottish goalkeeper Becky Flaherty had come quickly off her line to dive at Gurney’s feet in a rare Australian attack.

As the first half drew to a close coach Davie Thomson put on his three outfield substitutes, the powerful Donna Paterson for Rachel Ross, Cailin Michie for Lia Tweedie and Amy Lynch for Haylie Sinclair.

The second half was a carbon copy of the first half with Scotland increasingly taking a stranglehold showing great technical and tactical skills with only the speed and athleticism of the Australians stemming the tide of goals.

A long range effort from Amy Lynch whistled over, closely followed by an exquisite volley from Courtney Whyte at a corner which also skimmed the bar.

Another fine piece of set-up play by Amy Gallacher created an opportunity for Amy Lynch but once again the Aussie keeper made a fine save. Amy’s increasingly influential fellow striker Chantelle Brown showed great pace and determination with a stunning run and shot.

A great ball to Lia Tweedie almost secured the vital second goal but yet again the Aussie defence held firm.

Moments later Scotland’s captain Georgie Rafferty, a model of composure and consummate skill, brought the crowd to its feet with a tremendous free kick which thundered against the bar.

Not for the first time Chelsea Cornet had another great run and cross with the Scottish strikers inches away from the second goal. 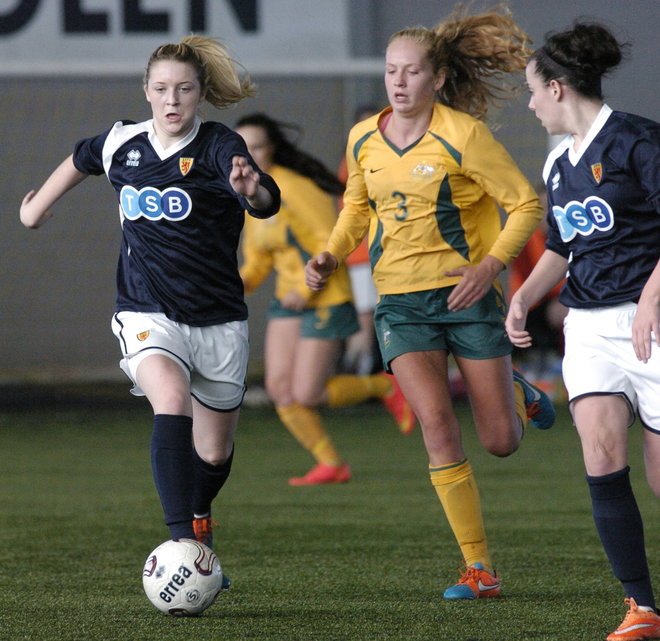 With the wonderfully gifted Erin Cuthbert pulling the strings in midfield the crowd were hungry for another goal to settle the match.

Step forward Chantelle Brown! Another fantastic burst of speed robbed the Australian defence and after taking the ball past the Aussie keeper showed great composure with the coolest of finishes, 2-0.

A shot from Courtney Whyte then crashed off the bar after sublime build-up play from the confident Scottish midfield maestros. Another long-range effort from Lia Tweedie just missed the target, bringing to an end Scotland’s first ever girls match at U18 level.

The Scotland team, brought together with one day of training, were outstanding throughout, showing the progress they have all made since representing the Scottish Schools Under 15 team over the last few years.

It was a wonderful occasion for all concerned with all the players and the spectators saying, “When can we do this again?” 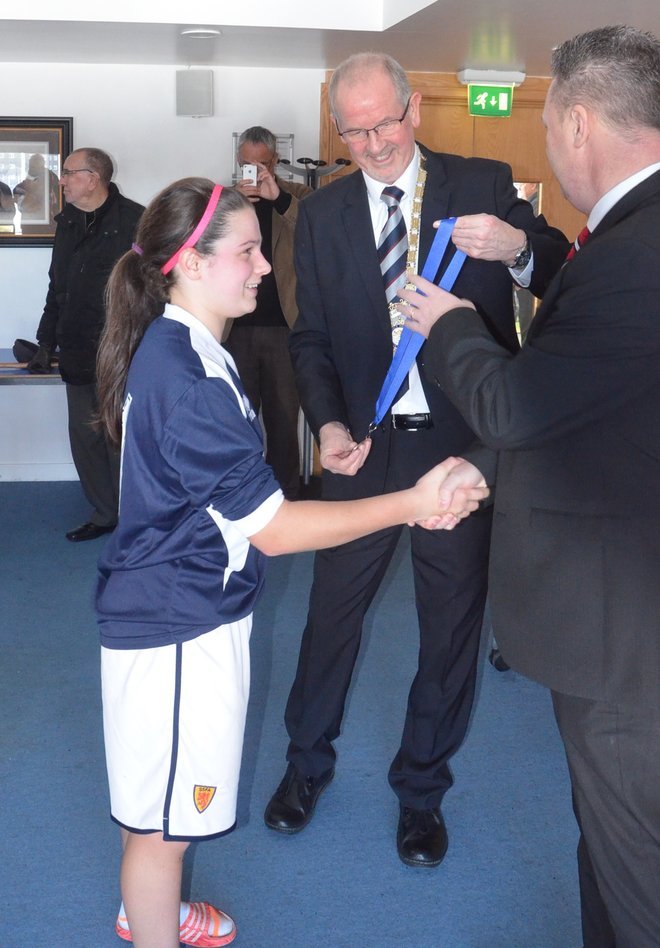