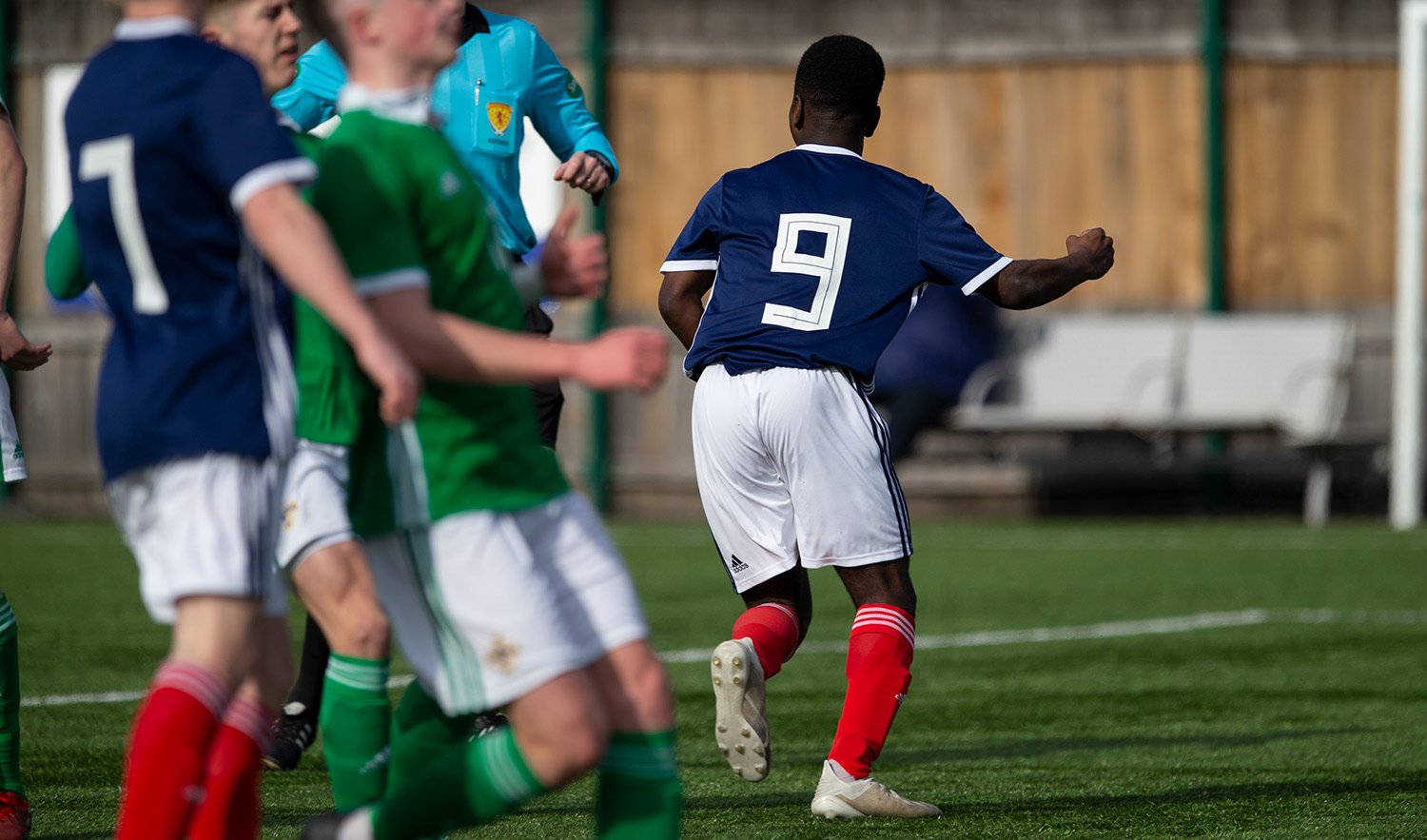 In a Centenary Shield game, switched from the original venue at Beith Juniors to New Western Park, Renfrew Juniors due to ground condition difficulties caused by wet weather, the SSFA under 18 boys international team fought out a competitive 1-1 draw against Northern Ireland.

This was the first match in this season’s competition and it displayed all the characteristics of a typical Scotland v Northern Ireland schoolboy international.

The visitors had a man sent off after 68 minutes, had a number of other players booked and two coaching staff also cautioned but they managed to hang on to win an away point.

Scotland shed the disappointment of a recent lacklustre performance against Stirling University and they showed great strength of character and fighting qualities in a tough game.

After only four minutes Scotland fell behind. A long cross from the left was won in the air by Peter McKirenan and his header from 15 yards gave Scotland keeper Jacques Heraghty ( Holyrood Sec) no chance.

Not the start the home team was looking for but they responded so very well to this early set back.

Lucas Williamson ( Wallace HS) made a great cross that gave Scott Neil ( Grange Academy) a chance at the back post and Blair Sneddon had a shot from distance saved.

The Scotland forward was causing his direct opponent so much difficulty that Northern Ireland made a substitution after only 26 minutes to try to curb the threat.

Referee Barry Cook was having his work cut out with some spicy challenges from both teams and his yellow card was used a couple of times.

Just before half time keeper Heraghty saved well a long range shot from Terry Devlin and the half time whistle came with the score at 1-1.

The first fifteen minutes of the half was feisty with further bookings including a Northern Ireland coach.

The boys from across the water had a few chances but after 21 minutes of the second half their captain, Tral Hume, who has been booked earlier threw himself down in the box and was shown a second yellow card for simulation.

Scotland played the ball well against ten men but they couldn’t find a way through the determined visiting defence.

More substitutions took place from Northern Ireland as did more bookings, including a second NI coach.

Despite the best efforts of both teams there were no further goals and the game ended with a share of the Centenary Shield points.

Well done to the Scotland team who had to display their competitive side to win a hard earned point.

Northern Ireland play next week against Wales in Belfast and on Thursday 19th March Scotland meet the Republic of Ireland at Home Park in Dublin.

Ben and Gospel after the game

Craig Johnstone after the match