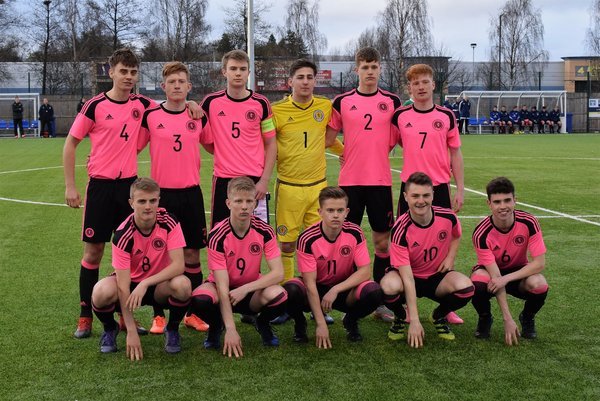 The U18 Scottish Schools’ FA international squad and their coaching staff displayed terrific character as their 2017 Centenary Shield campaign drew to a conclusion.

On Friday 31st March the group suffered real heartache when they saw two late, late goals rob them of a terrific result against Northern Ireland SFA at Solitude Stadium, Cliftonville, Belfast. In a keenly contested game Scotland deservedly took the lead when in the 48th minute Adam Brown (Grove Academy, Dundee) scored a well worked goal. Clever interplay at the edge of the box saw Brown, who had worked his socks off, finish a great move with a composed strike.

Northern Ireland roared back and despite two world class saves from keeper Ronan Fallens (St.Modan’s HS), when he tipped over two powerful netbound and close-range shots, the home team scored a goal in the 88th and then 90th minute to snatch the victory and leave the Scots in disbelief.

The Scottish party did however take their defeat with dignity and regrouped ahead of their final Centenary Shield fixture which was played at the excellent home of Renfrew Football Club at New Western Park, Renfrew, on Thursday 6th April.

From the outset the players and coaches showed a resolve to do well in their final match together.

They delivered big time on this with a great performance which saw them defeat the Republic of Ireland team 1-0. 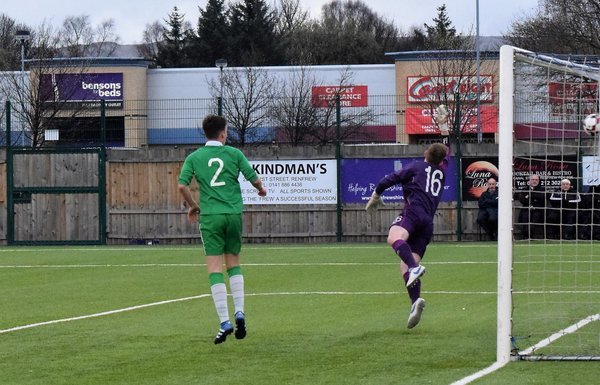 An early headed goal from captain Kyle Banner (Graeme HS) from a set-piece corner after ten minutes gave Scotland an early lead. Banner also led the defence in a well organised display and he was aided superbly by the other players in defence with George Stanger (Dunblane HS), Luc Bollan (Monifieth HS) and John Kelly (Trinity HS, Rutherglen) all defending superbly.

Keeper Ronan Fallens never really had a save to make in the first 45 minutes. In front of them was a hardworking midfield of Jamie Chapman (Edinburgh College) Cameron Ballantyne (Glasgow Academy) and local boy Calvin McGrory (Eastwood HS). They were resolute in defence and creative in attack.

The other local lad, Matthew Reilly (St.Ninian’s HS, Giffnock) was a real box of tricks up front along with Adam Brown and Euan O’Reilly (CS Auchterarder) whose strength and pace were a constant threat.

In a pre-planned substitution, Ross Connelly (Graeme HS) came on in goal and made a great double-save midway through the half. Nathan Brown (Stewart’s Melville College) replaced George Stanger and Cieran Dunne (Stewart’s Melville’s College) came on with twenty-five minutes to go to replace Adam Brown who had run himself into the ground. Robbie Bruce (Buckie HS) was a late replacement for Cameron Ballantyne and in the final minutes Adam Kirkwood (Stranraer Ac.) replaced Matthew Reilly.

Possession in the second half was shared and as expected the visitors pushed forward for an equaliser. Scotland held firm and offered a threat on the counter but there was no chance they were going to allow a repeat of the previous week. They defended stoutly and with great control.

Just to spice things up keeper Ross Connelly handled a backpass with two minutes remaining but his team mates rallied to ensure that no harm came from the momentary lapse. The game ended at 1-0 giving Scotland their first victory over the Republic of Ireland team in a Centenary Shield game since 1986. Unused substitute Kieran Sweeney (St.Kentigern’s Ac.) and the injured Declan Glass (Ross HS) joined with the team in their celebrations and confirmed just how well this group have interacted together over the short international season. 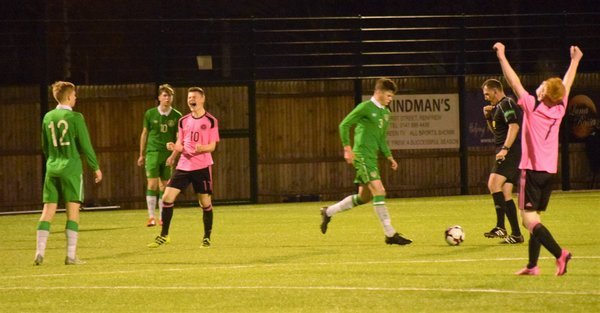 Notably at time-up and throughout the conduct of the disappointed but nevertheless proud Republic players, staff and officials was impeccable and sporting. The match officials, referee John McKendrick, Grant Murdoch, Hannah McLean and Adam Ingram, handled the game well in what was a great advert for the ethos of schools’ football.

The coaching staff of Craig Johnstone (St.Modan’s HS), Scott Douglas (Bearsden Ac.) and Steven Harvey (John Paul Ac.) should be congratulated for their efforts which were much appreciated by the boys. Also thanked greatly by all concerned was physio Donald Ritchie and International Secretary and Number 1 kitman, Les Donaldson. 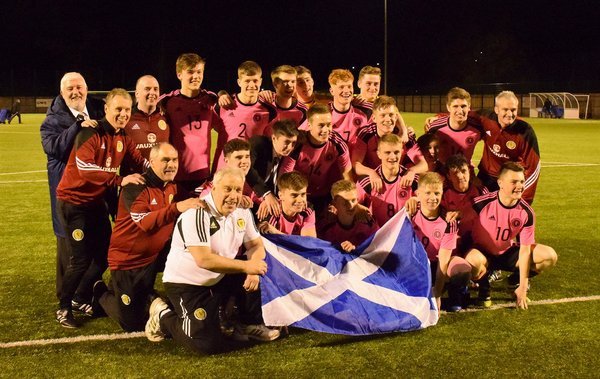 The squad will meet up for one final get-together when the Cap Presentation Ceremony takes place at Hampden Park on Friday 21 st April. The boys will say their farewells but leave with treasured memories of an excellent season representing the Scottish Schools’ FA in International football.