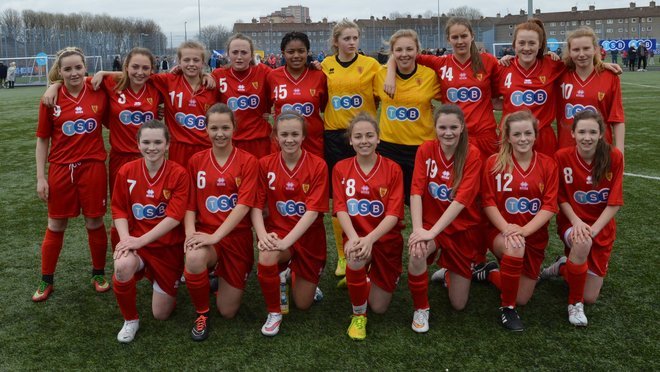 In today’s early games Scotland and the Republic of Ireland emerged victorious from two tight matches.

The Republic of Ireland faced Wales on pitch 2 and came away with a 2-1 win. Wales were playing their first match of the tournament and played well for the first quarter but the Irish girls scored twice to lead 2-0 at halftime.

Wales pulled one back midway through the second half and continued to press for an equaliser but ran out of time.

Meanwhile on pitch 1 England took on Scotland in what was always going to be an interesting match, given the performances of both teams on Monday.

England started off in control and the Scots had to defend well, Nicole Cameron and Sophie Aitken resolute in defence and keeper Kiera Gibson dealing with anything which got through.

Kaela McDonald was an important player in midfield, not afraid to take a knock or two, and Hannah Robertson was always dangerous on the right but chances for the Scots were limited.

The English defence looked confident and played the ball back regularly to their keeper to pass the ball along the line and stop the Scots from getting the ball in the penalty area. English chances were few and far between as well. and the half was brought to an end with a Molly Pike free kick from 20 yards which resulted in nothing.

The second half was also very tight but Scotland looked more dangerous. England’s best chance came early in the half when Scotland captain Nicole Cameron was forced into a clearance for a corner as England broke away.

With the half being punctuated by several injuries the 25 minutes of playing time were always going to be extended by several minutes of time added-on, and in the second extra minute Shannon Nagle sent a 40-yard pass from the halfway line for Hannah Robertson to chase into the box. As the keeper ran out Hannah fired a right-foot shot into the net from 12 yards for the winner. 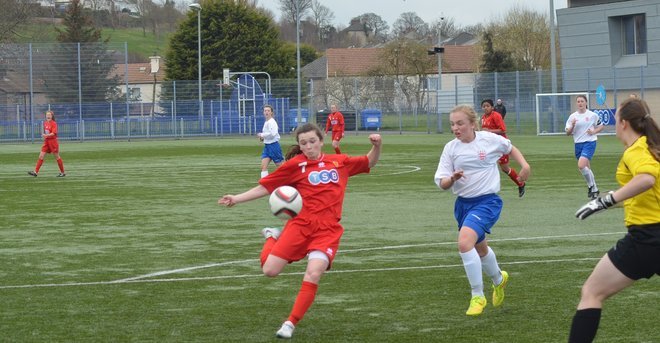 There were still more injuries as Kirstie McIntosh had to be helped off, so fully five minutes had passed after the goal before the referee blew the final whistle and the Scots could enjoy the win.

In the afternoon games England beat Wales 2-0 with two goals in the second half and the Republic of Ireland beat Northern Ireland 1-0 with a goal midway through the first half.

The table is as follows after today’s games :

The remaining games are :