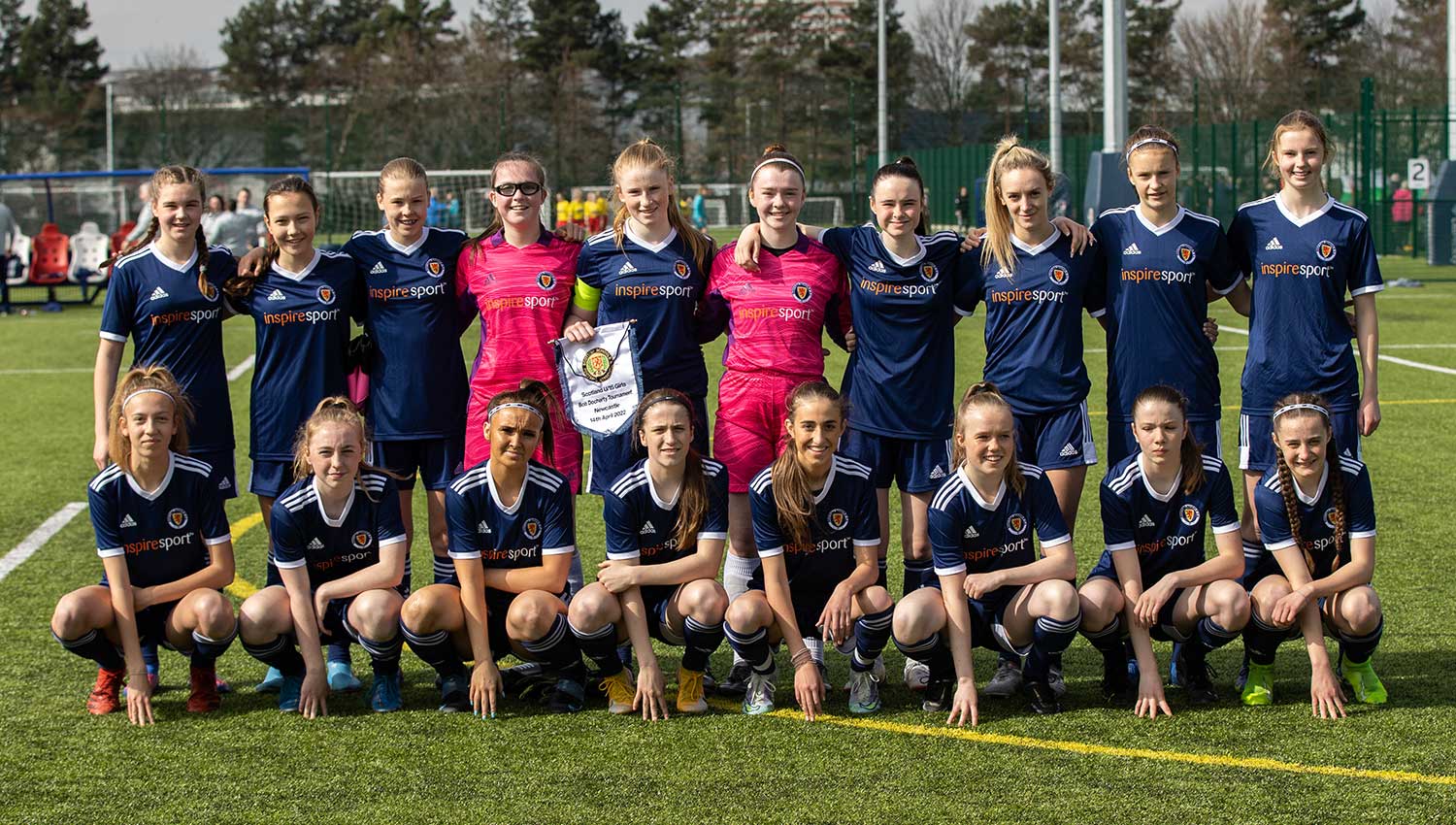 Despite Scotland creating a number of chances against a strong Republic of Ireland side, it was the Irish team who lifted the Bob Doc Trophy yesterday at Newcastle.

A beautiful, warm and sunny morning welcomed the finalist to the final of the Bob Doc 2022.

The Republic of Ireland had beaten England 4-0 and Northern Ireland 4-3 on the way to the final. Scotland had won the bonus point against England B and beaten Wales 2-1 in the group matches.

There were no signs of nerves as, once the whistle was blown, both sides fought hard to gain control of the game.

Scotland pressed the Irish defence from the off and this pressure resulted in, in the third minute, Sophie Martin turning the ball over and having a shot at goal from 12 yards out.

In the 10th minute Ireland created a chance. Good play down the right wing saw the ball cut back from the bye-line onto the Scotland six yards box, but keeper Erin Halliday dealt well with the danger.

In the 18th minute Sophia Martin played a superb through ball to Laura Berry. Laura raced in on goal, but pushed her shot wide of the far post.

In the 23rd minute, after excellent defensive play by Kate Fraser, followed by an attacking drive by Olivia Chomczuk , then a pass into Laura Berry ,who had a great shot which flashed across the face of the goal.

Scotland, at this stage, were really causing the Republic problems, and pushing hard to get the opening goal. Most of the play was happening in the Irish half.

By now Scotland were in their rhythm. Good combination plays were happening all over the pitch, in particular Freya Brien and Olivia Chomczuk were very effective down the left. The only thing missing was a goal.

Scotland were also keeping it tight at the back. Full backs Gigi Bradford and Millie Paton were on top of any Irish attacks down the wings.

Scotland finished the first half looking good. They had contained the Republic for most of the half and created at least four chances.  The only down side was they had failed to take any of them.

Scotland replaced Sophia Martin with Holly Daniel for the start of the second half.

Ireland looked in the mood and started the half well, pushing Scotland back into their half. Four minutes into the second period, Ireland came close when a shot, after good build up play down the right, flew narrowly over the bar.

Two minutes later, Olivia Chomczuk dribbled her way past three defenders to get to the Irish bye-line only for her cut back to be blocked by the Irish defence.

In the 15th minute the Republic opened the scoring. From a free kick wide left the ball was played into the Scotland box for Ireland’s Kiera Sena to rise and head into the net.

Ireland took confidence from the goal and now had a firm grip on the game. Scotland were finding it hard to get the ball back from their fast moving and passing opponents.

With ten minutes to go the young Scots found reserves of energy from deep within and took a hold of the game again. They piled on the pressure and won a number of free kicks and corners which the Irish conceded with desperate defending. From one corner Laura Berry smashed the ball towards the goal only to see it cleared off the line at the last minute.

With time running out, Scotland had one more attempt when great play by Millie Paton, who beat two defenders before playing in Laura Berry. Laura connected superbly with the pass and sent the ball goalward only to see the ball rebound from the cross bar.

Soon after the referee brought the game to a close and the Republic of Ireland retained the Bob Doc Trophy for a third year.

This young Scotland side, many who are able to be selected next year, can hold their head high. They gave their all today. On another day any one of the chances they created would have gone in and the result would have been different. But it wasn’t to be.

That’s the Bob Doc over for another year. Our squad have been outstanding ambassadors for their schools. They worked hard, grew in confidence as the week progressed and certainly ended the competition playing outstanding football. Bring on next year’s competition.