The section decider got underway for the young Scots on the Sunday afternoon against their English counterparts who had the benefit of a full day’s rest before today’s encounter.

The opening exchanges were both very tight and very even with both teams testing each other out. England’s power and athleticism against the Scots’ skill and guile suggested a closely matched encounter.

Both teams sought to gain the early advantage but it was the stop-start nature of the game with free kicks aplenty that hindered any rhythm to the match. The physical nature of the English midfield and no-nonsense approach from the defenders kept the young Scots at bay. The game was a full-blooded affair with the centre of the pitch an important area for both teams where both Kirstie McIntosh and Michaela McAlonie had to contend with strong challenges from their opposite numbers.

However they certainly gave as good as they got and always attempted to get the ball down and pass it into dangerous areas for the forward running of both Abby Callaghan and Morgan Cross. 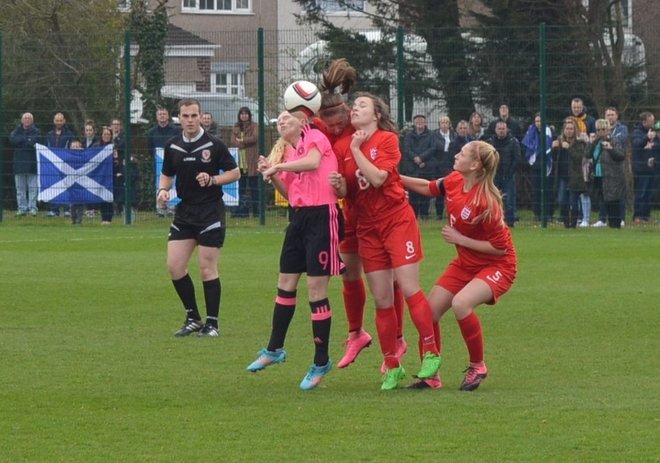 The game was just settling down with few if any chances being made when it was stopped for a full fifteen minutes as the assistant referee unfortunately had to receive medical attention.

As the teams returned from the changing rooms it was Scotland who made the better of the restart. Elena Santoyo-Brown who had been so influential yesterday was another who was a target of some heavy challenges in the early part of the game.

Kirsten Laing who was working hard both in a defensive and attacking capacity did well to combine with Morgan Cross and sent a lovely ball into the box but it was the English captain and centre back who attacked the ball to clear to the edge of the box. Kirstie McIntosh just could not get the ball to sit down before her shot went across the face of the goal and away for a goal kick. It was Lauren Davidson next who broke through with another positive direct run but again her shot was blocked as Scotland looked for the all-important first goal. 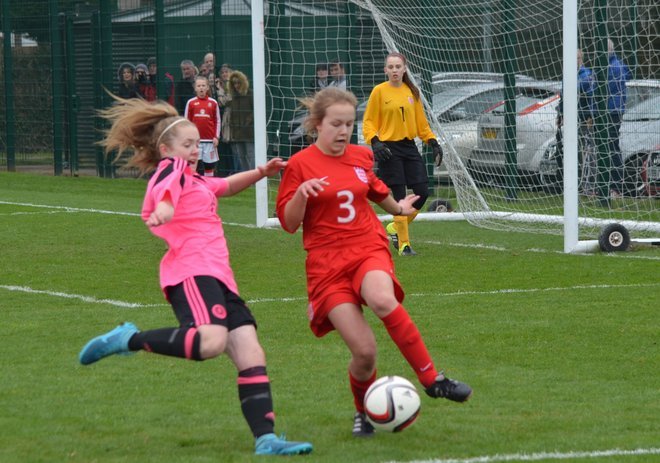 The best chance of the half came from a little bit of magic from Abby Callaghan who, taking the ball on the half-turn, fired a shot towards the top corner only to see the keeper make a fine save to parry the ball away for a corner. Jade Baillie in the Scots goal was called into action on a couple of occasions in the first period but overall the goalless score line was a fair reflection on this bruising encounter.

The second half started as the first had finished with Scotland attempting to get the ball down and play and England doing their utmost to defend and press all over the pitch and play the ball forward as quickly as possible.

It was one of these long balls that was cleared for a corner by Scotland that led to the breakthrough in the 38th minute. An inswinging corner was played into a dangerous area and as it dropped inside the 6-yard box it was prodded into the
Scottish net, 0-1.

Scotland retaliated and created several chances and half chances with Leah Eddie’s free kick being the closest with her well struck shot just going over the bar with the keeper well beaten. As Scotland continued to press, the midfielders were getting increasingly frustrated by a series of heavy-handed English tacking that were eventually punished by a series of yellow cards. 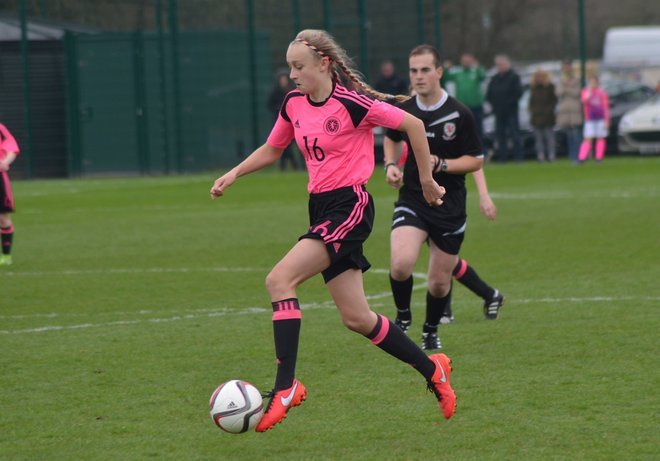 The vital breakthrough regrettably did not come for the plucky Scots and unfortunately they were hit by a sucker punch. As the ball broke out of the Scots penalty box an English midfield player hit a speculative shot in the direction of the goal. The ball went through a forest of players and fortunately for England hit the post and ended up in the Scottish net, 0-2 (50m). It was a sore one for the Scots.

Undeterred the young Scots kept playing football. They worked from all areas of the pitch in an attempt to play in Naomi Welch, on as a substitute for Morgan Cross who had run herself into the ground for the cause. Jemma Marriott worked tirelessly down the right-hand side and was just short of producing a more telling delivery after slipping her defender with ease. Elena Santoyo-Brown who again had been the target of some very heavy challenges just could not get on the ball at this stage. 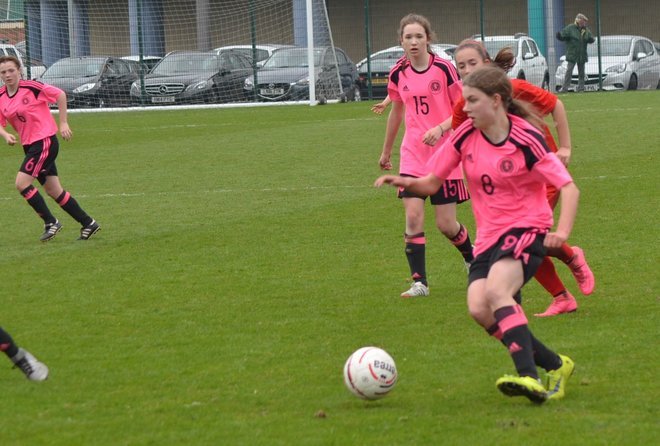 The English long-ball football was their strength and they played it all day, however the Scottish defenders, in particular Tara McGonigle, were more than a match for this style of play. The Scots continued to play their way towards the English goal however their defence stood firm and although defending deeper and deeper they held on to the end of this physical encounter.

The girls had given everything and attempted to play the style of football that had been so successful for them in the previous games right to the final whistle.

Although they were disappointed they had given everything that they could for the SSFA cause.

Day 3 would bring a game against the hosts Wales at the Newport Stadium.