Who Are the Scottish Schools’ Football Association?

The Scottish Schools F. A. which was established in 1903, is an independent charity whose purpose is to, “work with schools to support and promote pupils’ wellbeing through the medium of association football and related experiences, and to engage in relevant charitable enterprises.” The SSFA depends entirely on volunteers to conduct all of its business at International, National, Local and School level. Honoraria are paid to key administrative personnel when financial conditions permit.

The Impact of Coronavirus

In common with every other grassroots football association, the Coronavirus Pandemic impacted on the final stages of the SSFA’s 2019-20 season. At local, national and international level, fixtures, leagues and competitions were either called, cancelled, or placed in abeyance. Consequently, the main focus of the SSFA’s activities for season 2020-21 has been to find a way of enabling the pupils and staff who had worked so hard to reach the latter stages of national competitions in 2019-20, to finish the job.

A new governance structure replacing the President’s Committee, Operation’s Committee and Council was agreed at the June 2019 AGM and is now in place as below: 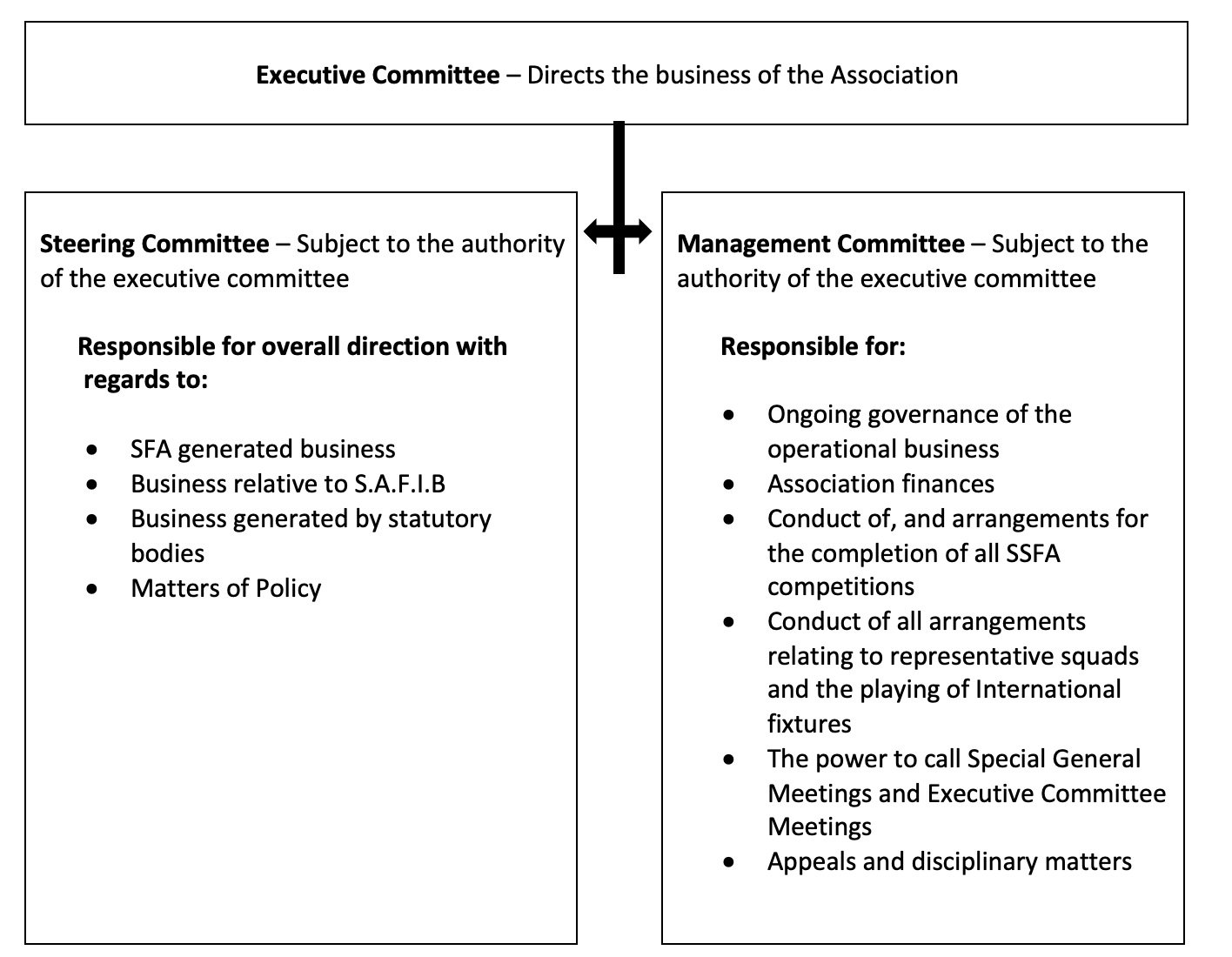 The Association’s activities stem from its constitutional objectives and may be summarised under the following headings:

The education and development of youngsters is, by definition, at the very heart of the Association’s activities. The Association is committed to raising achievement in Scottish Schools. Its activities add significant value to the curricular life for many school pupils.

The Association provides support for its Coaches and Selectors to participate in Staff Development through the Coach Education programme of the Scottish Football Association. The Association’s website acts as an important means of communication, provides a news and results service to affiliated schools, associations and the wider community, and serves as a record of the Association’s activities each year.

Securing sponsorship will help the Association maintain and develop its activities.

Working in Partnership with the SFA

The Association is committed to working in partnership with the Scottish Football Association in areas where aims, objectives and values are shared.

The SSFA will continue to foster its links with the professional game at a range of levels, including local liaison between schools and clubs regarding player development and access to facilities, as well as monitoring demands on young players

Talent identification for players already takes place through the processes of creating representative selects at Local Association and National level and the SSFA will continue to conduct its programme of trial games and matches. These events also provide significant opportunities for the identification of coaches and they are encouraged, via mentoring and financial support, to embark on the appropriate Scottish FA Coach Development pathway. One element of player identification that has been noticeable in recent years has been in the identification of late developers, often players who are no longer in, or have yet to take part in, Club Academy Scotland. The SSFA is committed to sustaining these opportunities for players and coaches

The Association presently has three main aims with regard to levels of participation:

Conduit to schools for SFA – The SSFA provides an important means by which appropriate guidance and advice, including information relating to coach education, from the SFA can be promoted and disseminated to its members.

Scottish Schools F.A. Schools Quality Award Scheme – In season 2015-16 the Scottish Schools F.A. introduced a Schools’ Quality Award Scheme. The objective of the Award Scheme is to encourage and recognise the provision of football in schools for both boys and girls at local and national level and the attainment of Scottish FA coaching certificates by team coaches. In season 2018-19 four schools were successful in attaining an award, three gaining a gold award.

Data Collection – The SSFA is committed to the submission of an agreed data set on an annual basis, subject to constraints of data protection and the fact that the Association works with young people. The structures are now currently established to enable this data capture to take place. An upgrade of the Schools’ Membership IT Admin system which captures school affiliations, association affiliations, entries to competitions, player registrations, details of officials and which generates relevant invoices is now in use.

The SSFA undertakes charitable activities which are consistent with its values and ethos. These include, supporting and/or donating money to charities which support children and young people’s wellbeing. The SSFA believes it is important that the young people who benefit from playing football with their school friends should also understand that they can help support other children and young people in need. Consequently, the SSFA has engaged with various charitable enterprises over the years including, the STV Children’s Appeal, the Beatson West of Scotland Cancer Centre, the Chris Mitchell Foundation, SAMH (Scottish Association for Mental Health) and CHAS (Children’s Hospice Across Scotland)

The Scottish Schools FA is governed by a continued commitment to being self-sustaining and has managed its affairs on such a basis for many years.

The annual budget is based on realising an income from Affiliation & Entry Fees, Sponsorship, Gate Receipts, Grants and Donations. That then determines levels of expenditure on Representative Selects, Competitions & Events, Administration & Honoraria, Grant Aid for Exceptional Travel to Schools and Associations, Insurance and Miscellaneous costs. All budget planning is based on a minimum target of break-even for the year. Annual Accounts are produced, are subject to audit by professional auditors and, because the SSFA is a registered charity, also subject to scrutiny by OSCR.

An important annual target is to raise income from Sponsorship.