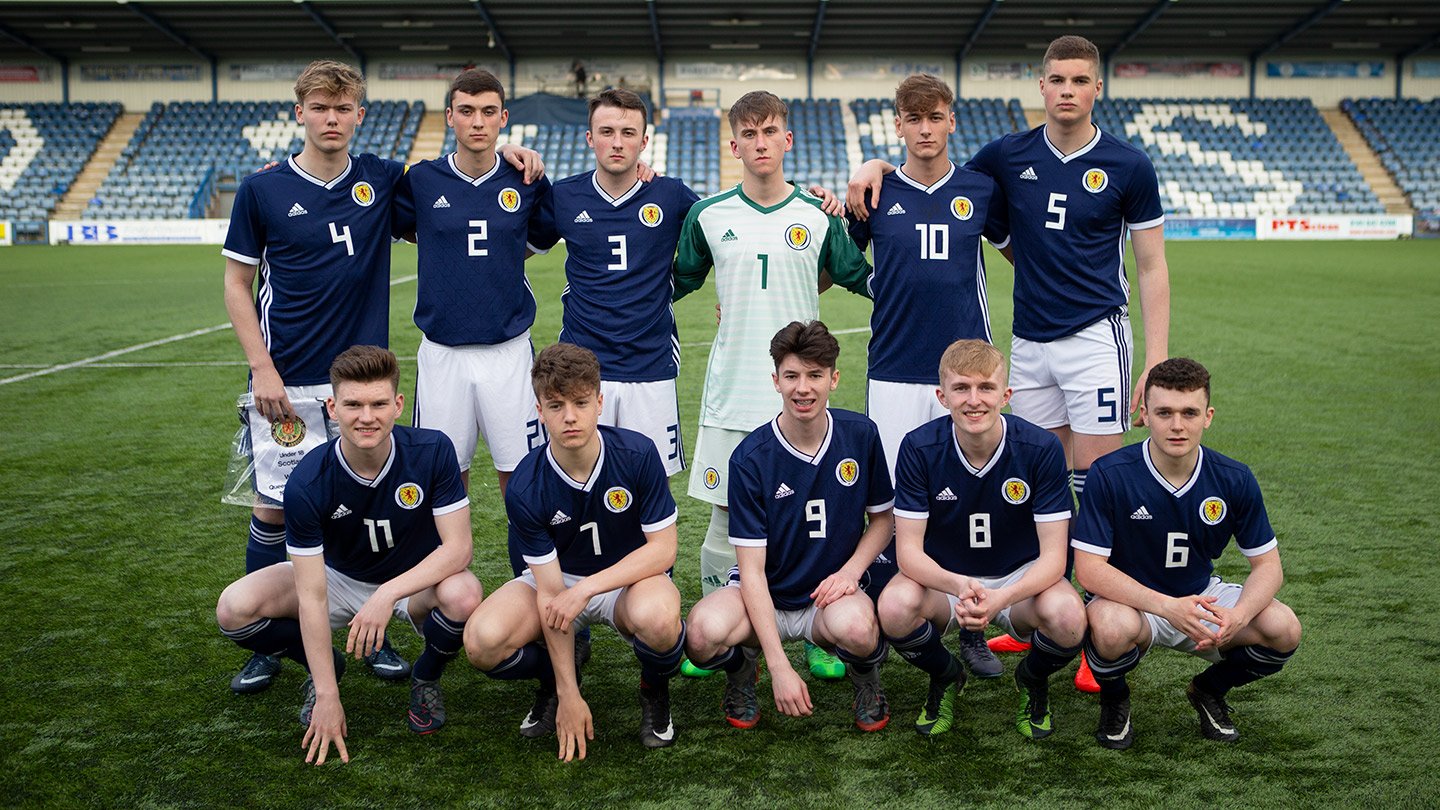 Scotland took to the field in Dumfries in that rarest of Centenary Shield commodities – bright sunshine. In a way this should have been symbolic: this should have been an opportunity for Scotland to win the Centenary Shield, but last week’s defeat in Dublin rendered that hope an impossibility. Instead, Scotland (and Wales) took to the field knowing that a victory would give them second place outright in the final classification.

Several changes were made to the previous line up. Gavin Watt started at left back to allow Cameron Clark to play on the left hand side of a revamped midfield, which also featured starts for Kieran Chalmers and Sean Fagan. The men missing out were Sam Walker, Reece Rintoul and the injured Declan Walsh.

Watt was under pressure as early as the third minute when a long ball from Iolo Jones was fisted clear by Fraser Currid, and the big Greenock Morton defender had to belt the ball clear under the attentions of huge frontman Sam Snaith. This served as a warning for the Scots that Snaith’s dangerous presence would keep defenders on toes for most of the evening. Sadly, this warning was not heeded, and a succession of loose passes by Scottish defenders were seized upon by Osian Jones. He quickly fed Snaith to bury a low finish into the back of Currid’s net after only 5 minutes had elapsed.

Scotland’s fightback was almost instantaneous. A deep Cameron Clark corner passed over the head of Nathan Brown to find GAVIN WATT lurking at the back post to nod the ball home from six yards out.

The home side were buoyed by this equaliser and quickly began dictating the flow of the game. A neat Gavin Scott pass found Daniel MacKay running behind the Welsh defence, but the Inverness man was judged to be narrowly offside. This move was thwarted, but Scotland would take the lead in 17 minutes.

A chipped pass from Aiden McKeown allowed Scott to race through on goalkeeper Max Manson on the right hand side of the area. Manson was quickly off his line (a feature of his goalkeeping all evening) but Scott was quick too, and the forward was able to bump a looping shot goal-wards. The ball would have passed the far post, but for the attention of CAMERON CLARK who judged the awkwardly bouncing ball well to athletically head into the empty net to give Scotland a 2-1 advantage.

Scotland were enjoying themselves now, and patient play involving Aiden Kemp and Kieran Chalmers allowed Chalmers to set up Mackay on the edge of the Welsh penalty area. He twisted away from two defenders, but shot past the post. The same men would link up again after 25 minutes to feed Scott wide on the right hand side. Unfortunately for Scotland the dangerous-looking cross was well gathered by Manson.

Between times Snaith found his way into referee Lloyd Wilson’s notebook for barrelling into Watt on the left touchline. Whilst the challenge looked a sore one, it simply prompted laughter from Watt as his opponent was shown the yellow card. If this was a sign that the Welsh were ragged, a clearer indication came in the 27th minute when Keane Royall was given his marching orders for his involvement in an off the ball incident. Iolo Jones was then cautioned for a challenge in midfield, as Scotland enjoyed a good spell of possession.

Things could have been very different at this juncture for Wales. Just before Royall’s expulsion Jones managed to come between Currid and McDowall before being denied by Nathan Brown.

Scotland were enjoying good possession in midfield, much of it orchestrated by the thoughtful Kieran Chalmers. A move involving all of the midfield players set Mackay free on the right. With the Welsh defence dragged to the near post by a couple of good decoy runs, Mackay passed to Scott in the area, who just failed to control. A minute later Clark and MacKay worked a short corner to Chalmers. The diminutive midfield man played a precise cross to the head of Aiden McKeown, but the full back could not find the target with his header.

At times like these Snaith’s malevolent presence lingered at the other end of the field. What an asset he proved for Wales with gutsy running and pressing of the Scottish defence. He was almost rewarded with a second goal eight minutes before half time, when he turned Brown and shot past Currid, only for McDowall to appear on the goal-line to boot clear.

MacDowall’s last involvement of the half was in an attacking sense, as his raking ball found McKeown galloping down the right – a feature of this season’s Centenary shield campaign. An excellent driven cross was put behind by Lee Jenkins just before the Scottish cavalry could arrive.

So the half ended with Scotland on the front foot and enjoying the lion’s share of possession (as one might expect when facing an opposition with depleted numbers). Wales still looked dangerous on the counter-attack with Snaith willing to run himself into the ground for the cause.

Scotland made two changes at half time, Reece Rintoul replacing Sean Fagan in the midfield and Nathan Fell replacing captain Nathan Brown, who appeared to have picked up a knock in his bruising encounter with Snaith. This meant a defensive re-shuffle for Scotland, Watt moving into a more accustomed central defensive role, with Clark reverting to the full back berth he has occupied with distinction this term.

The second half followed much of the pattern of the first: Rintoul evaded two challenges on the edge of the area and shot wide; Mackay had a shot blocked from outside the area at the expense of a corner; a beautiful Chalmers pass found Scott just offside. Chalmers continued trying to pull the strings – his long pass almost found Fell, but Manson was again quickly off his line. Next a superb Chalmers pass looked to send MacKay in on goal, but terrific defending from Jenkins again cleared the danger.

Manson again kept Scotland at bay by being swiftly off his line to gather McKeown’s long diagonal ball with 20 second half minutes having elapsed.

It looked simply a matter of when Scotland might add to their goal tally; particularly as Snaith had been helped from the field on the hour mark – testimony to the difficulties one man finds when dealing with a posse of big defenders, even in this modern era where a tackle appears to be an endangered species. Jack Hodge was introduced to the fray with just over twenty minutes left on the clock, as Scotland pursued the next goal; Aiden Kemp the player to be sacrificed.

The next goal did come, but inexplicably from a Scottish point of view, for Wales! Jenkins’ long throws had been a weapon for Wales all evening, but given the aforementioned height in the Scottish back-line, they had hitherto been dealt with rather comfortably. Not so in the 70th minute. Lathan Garrett flicked the throw in on, and into the Scottish net. Palmerston was stunned, as this was almost the first Welsh attack of the second half.

Amazingly, Wales made it 3-2 three minutes later. Pumped up by equalising, Connor Harwood launched a raid down the right. Clark and Watt conceded the corner, but Ben Fawcett’s delivery was of the dangerous, inswinging variety: so much so that the ball found its way into the goal via a Scottish head. The Welsh players and staff were jubilant, and justifiably so – coming from behind with a shortage of men demonstrates fantastic spirit.

Scotland tried to fight back by further shuffling the pack – Watt and McKeown were replaced by Walker and Harwood respectively and Jack McDowall was pushed up front. Wales had everyone back, and Scotland had virtually everyone forward with Cameron Clark left at the back to mind the shop. This called for resolute defending, and Jenkins was an example to all of his colleagues, twice intercepting from the dangerous looking Harwood in the closing seconds to see the Welsh over the finishing line.

After the match the Scottish players were presented with their caps and left to reflect upon ‘what might have been’ in a campaign which promised a great deal but ultimately resulted in a fourth placed finish. Scotland would contend that they were better than that, but the Republic of Ireland’s name is the one engraved on the Centenary Shield this year.

Interview with captain Nathan Brown and Cammy Clark after the game