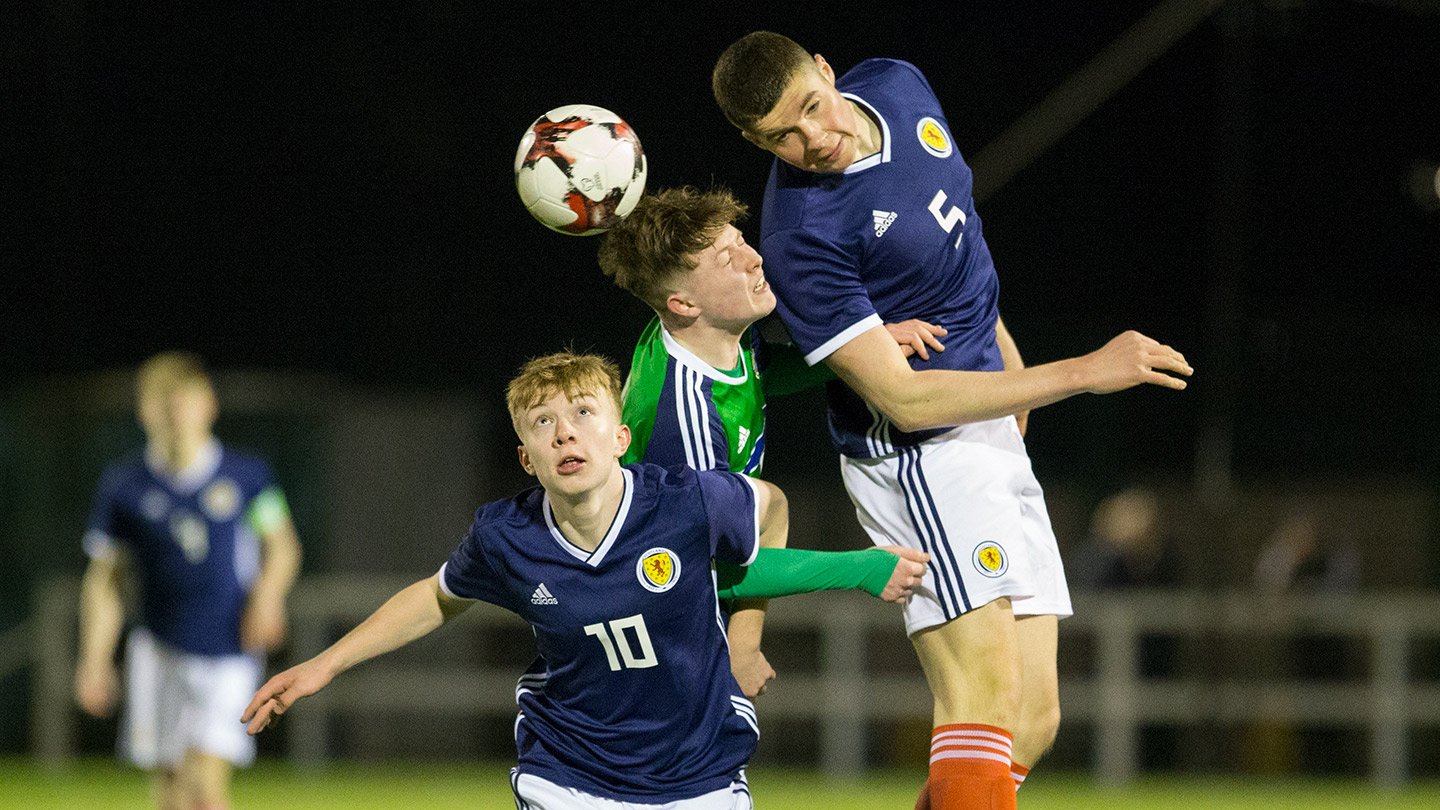 No breakthrough in Renfrew

The Senior boys’ team opened their Centenary Shield campaign against Northern Ireland in the now familiar surroundings of Renfrew FC’s lovely New Western Park ground. The match had originally been scheduled for Greenock Morton’s Cappielow, but unprecedented levels of snow in the Greenock area (almost 18 inches had fallen in the week preceding the match) had necessitated the switch to Renfrew’s all-weather surface.

Northern Ireland always provide stern opposition to Scotland, witnessed by the fact that tonight’s hosts had only been successful in 2 of the previous twenty meetings. Furthermore, statistics would point to a tight match: only 3 of these 20 games had been settled by a margin of more than a single goal.

Given this background, it was unsurprising that the first 25 minutes were very evenly contested. The only two strikes on goal came from Scotland’s Daniel MacKay: first being found running into the box by a slide-rule Sam Walker pass to pull a right foot shot across the face of goal, then linking with Declan Walsh to fire in a left foot grounder which was comfortably held by Northern Ireland’s superb goalkeeper Declan Dunne. This personal battle would feature strongly in the narrative of the rest of this clash.

Northern Ireland finished the second part of the first half with a couple of opportunities around the 40 minute mark. Firstly Andrew Scott broke through a couple of challenges in midfield, but shot past the post, before Caomhin McConnell wriggled infield before sending a left foot shot over the crossbar.

Scotland looked to open the scoring on the stoke of half time when Aidan McKeown tried to slip Walker in on the right hand side, but Dunne rushed from his goal to again thwart the attack.

Scotland made two changes at the interval, as Aiden Kemp and Gavin Scott replaced Sam Walker and Nathan Fell. These changes seemed to invigorate the home side as they pursued the opening goal.

MacKay again went close. He demonstrated superb trickery down the left hand side, before his shot was deflected into the side netting. The resultant corner was missed by goalkeeper Dunne and partially cleared by Aaron Donnelly only as far as MacKay, who saw his wicked dipping shot spectacularly touched over by the in-form number 1.

Even Dunne could do nothing about MacKay’s next attempt. The custodian just stood and hoped that a partial block on the Scotland man’s shot would not find the netting. The shot did – but unfortunately it was on the wrong side, as it nestled on the roof of the rigging.

Northern Ireland had their first second half attack of note on the hour mark, when Cameron Clark (playing on his ‘home’ ground, as he is currently on loan to Renfrew from Livingston) had to show excellent anticipation to intercept as Aaron McGurk looked to advance on the Scotland goal.

Scotland made a change up front in the 61st minute. Ben Harwood (who is at school less than 5 miles from the ground) was given a thunderous reception from crowd as he replaced Jack Hodge. He almost made a swift impression as he waited to pounce on a low McKeown cross which followed good interplay between Kemp and Rintoul outside the area. Again goalkeeper Dunne was on hand to end the danger by gathering cleanly at the front post.

With 15 minutes to go, Northern Ireland had possibly their best opportunity. A dangerous cross from Donnelly on the left was nodded down by Jack O’Mahoney who looked for substitute Pablo Andrade. Before Andrade could pounce, Scotland goalkeeper Elliot Anderson had swiftly clutched the ball. Scotland’s substitutes then combined to test the skills of goalkeeper Dunne. Harwood broke down the left before cutting infield. His shot was blocked by Caolan Coyle, but the loose ball was fired goalwards by Gavin Scott. Dunne again saved superbly.

In the last two minutes of the match Scotland had two more opportunities. Scott played a fine pass to MacKay, who looked as though he was through on goal, only to be denied by a fantastic interception by Adam McAleenan. The lively Harwood then shot over following a crisp interchange of passes with Kemp, but alas there was to be no goal for the home crowd to cheer.