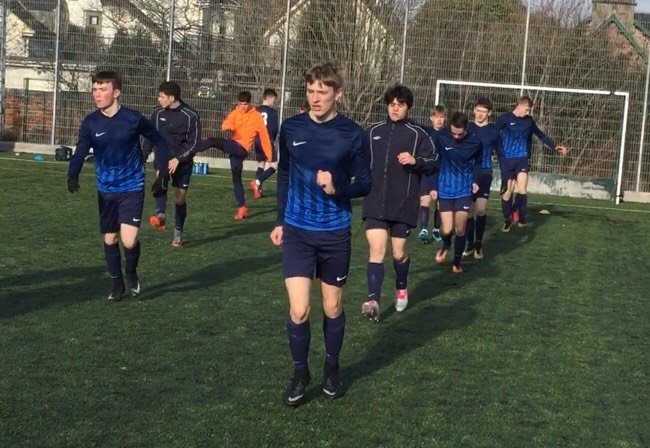 Bearsden travelled the long journey north for the last 16 tie after successfully seeing off St Rochs, Bannerman and Clydebank High in previous rounds.

They faced a Millburn side who had defeated schools from Aberdeen, Fife and Kirkcaldy to reach this stage.

It was a very tense start to the match although played in very good spirits by both sides with a competitive but fair contest.

There were not many chances from either side in the opening half with Bearsden probably edging the better of the chances.

The most likely opening for either side was from a cross ball and Jamison was very close to opening the scoring after latching onto a Cuthbertson delivery from the left only to fire high and wide.

Fanning also could have added to his account for the season when he almost got on the end of a McLean cross but he mis-timed his header and it fell to safety.

McAlpine at the other end didn’t have a lot to deal with but did have to watch carefully after a long range effort was dipping just under the crossbar but the keeper reached well to clutch the ball to safety.

Johnston and Craig marshalled the defence well despite a barrage of direct long balls from the goalkeeper.

Ord was also finding pockets of space in midfield to transfer the play from right to left as the visitors tried to control the possession of the game.

Both sides managed to cancel each other out for the remainder of the half.

The second half started in much the same fashion as the first however the visitors started to get far more comfortable in possession and for long spells were looking the more likely to score.

The ball was just not landing in the right places to get a clear shot on goal but Cuthbertson and Deveney were becoming more involved in an attacking sense.

The ball was transferred from right to left as the visitors tried to drag the opponent out of position to create an opening.

Fanning then should have opened the scoring after a cross from the right landed perfectly on the strikers head but he mis-judged the flight and the ball trickled to the goalkeeper.

It wasn’t until the changes were made that Bearsden finally broke the deadlock.

Johnston and Robertson were replaced by Weir and Khan and within just 4 minutes, Bearsden were ahead.

Cuthbertson delivered a powerful corner which was met perfectly by Weir on his 17th Birthday to head the ball into the net.

This was also the first game back for Bearsden’s vice captain since injuring himself in the previous round in December.

This eased the pressure slightly on the visitors but forced Millburn to change their shape and throw a number of players forward.

Spaces were created and Bearsden continued to dominate possession.

It was 2-0 after 68 minutes and it was a similar situation to the opening goal.

This time Cuthbertson delivered from the opposite corner and Deveney met the ball to powerfully double Bearsden’s lead.

This did seem to knock the stuffing out of the home side and the possession became more comfortable with Ord, Deveney and Khan working tirelessly to support Fanning.

The hard working Jamison and talented Martin were then replaced by Sheridan and Logan to provide fresh legs for the closing stages and then Lambie replaced Fanning for the remaining 6 minutes.

Lambie continued his impressive scoring ratio by finishing the scoring off after Cuthbertson assisted once again.

It was a Messi-like finish when the striker raced through on goal and dinked the ball over the keeper with a deflection on route to the net.

The match was almost rounded off in style when Ord flicked the ball over a couple of defenders on the right before trying to lift the ball over the advancing keeper but his effort was clutched at full stretch by the goal-keeper to keep the score at 3.

Bearsden progress into the Quarter Finals of the Scottish Shield where they will now await the winners of Perth HS and Cathkin High to see where they will travel to next.