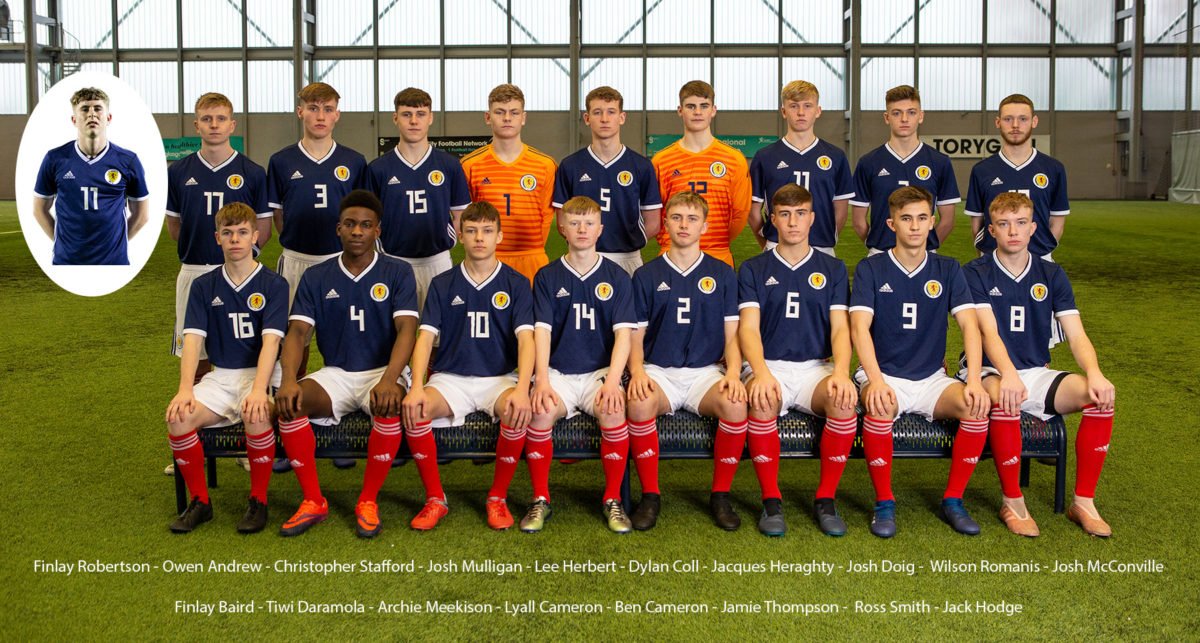 Great season despite the results

The 2019 SSFA squad got the victory that their excellent play has deserved when they beat the Welsh Schools FA side 2-1 on Thursday night at Cefn Druids.

In what has been a difficult season in terms of results achieved, the style of play that the team has produced has been excellent – possibly the best produced by any under 18 schoolboy international team in recent years.

Beaten 1-0 in Belfast by Northern Ireland in a scrappy, wind affected game the team’s performance against England at Inverurie’s Harlaw Park improved dramatically. They dominated play with excellent possession but it was still a disappointing result as England secured a classic away game steal with a 2-0 victory.

Next the Scots faced the Republic of Ireland at Somerset Park, Ayr. Traditionally strong Centenary Shield contenders the Irish were first to admit that their 1-1 draw was fortunate for them as Scotland again played with great style and ability. Josh Mulligan scores the goal in a good well contested match.

Facing Wales away from home in their last fixture of this year’s Shield event, the Scots were determined to notch a victory and they duly did so with a superb performance.

Wales put the Scots team under pressure in the first ten minutes and Scotland had to dig deep to avoid falling behind.

When they finally found their rhythm however it was clear who had the better players and style of play. Finlay Baird, Jack Hodge and Finlay Robertson took total control of midfield and with penetrating runs from Josh Milligan and raiding runs out wide from Josh Doig the Scots took control and started to create chances.

Tiwi Daramola scored a fantastic individual goal around the half hour mark. He flashed past the left full back and drove a finishing shot across the keeper to put Scotland ahead.

A few minutes later the same player repeated the same scenario and this time his cut back was unavoidably played over his own line by the unfortunate Welsh defender.

In the second half the Scots maintained a firm grip on the game and controlled possession throughout.

As you would expect Wales never gave up and they scored in almost the last minute of play to make the final score 2-1 to Scotland.

There wasn’t a failure in the Scottish team and the play displayed was of the highest standard.

The boys have been fantastic ambassadors for the SSFA organisation and their country.

The coaching staff of Craig Johnstone, Scott Douglas, Gerry O’Hare and goalkeeping coach, Stevie Harvey have worked so hard to prepare the team so well.

Physio Donald Ritchie has again made a terrific contribution while International Team Secretary Les Donaldson MBE has pulled all the strings to put together a great programme for the team.

The players will meet up for one last time on Wednesday at Hampden for the Cap Presentation Ceremony when their parents and families, who have given great support throughout the four month campaign, can join in the celebration of what has been a good season for a great bunch of schoolboy players. Well done lads!!