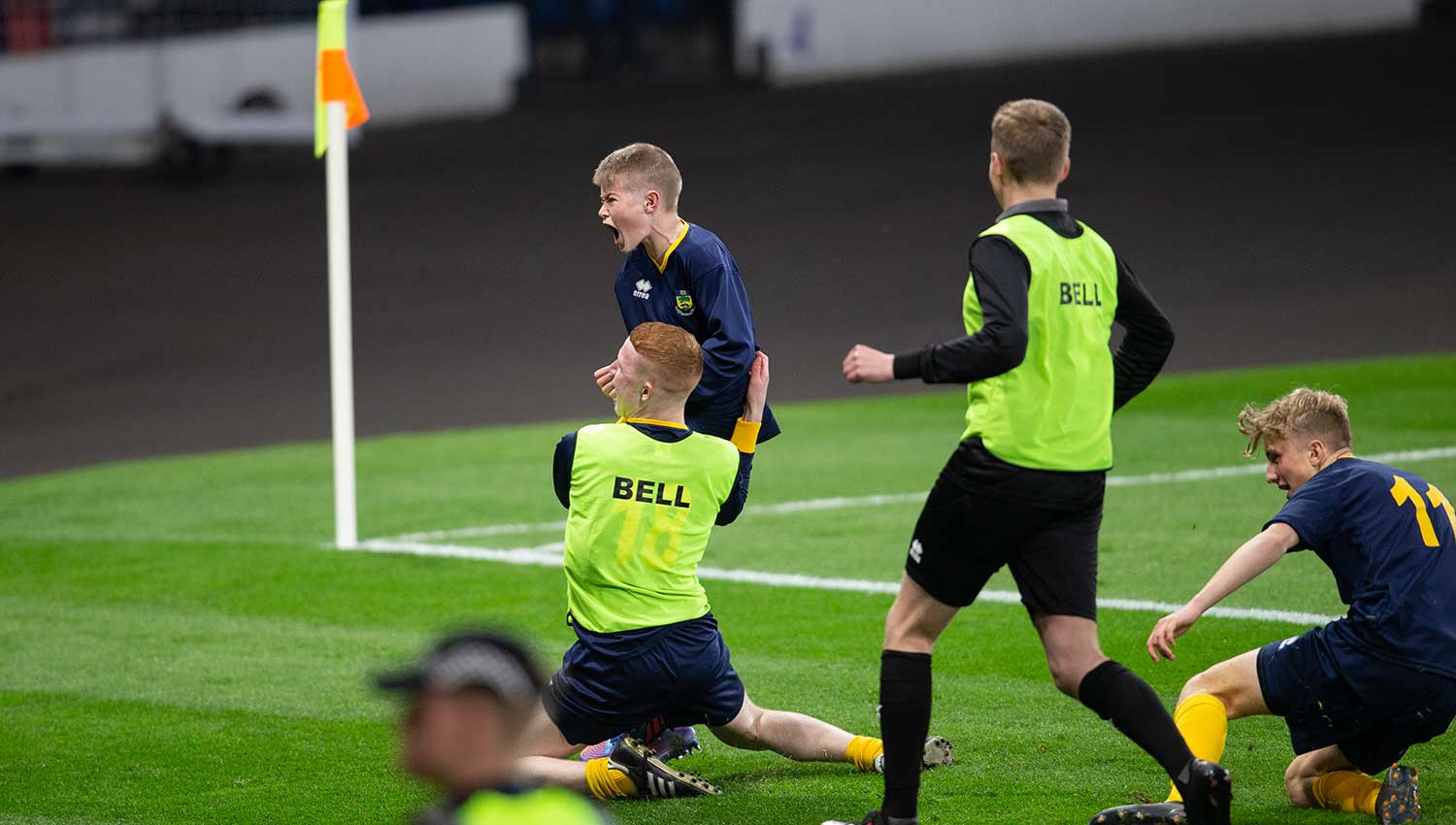 Grandstand Finish for Fans at Hampden

Two VERY late goals forced the game into penalties with Linlithgow captain Matthew Wallace the hero, scoring and saving a penalty to allow Kerr Robertson to convert the winner.

The cup holders had taken an early lead after only 7 minutes when James Hazlett scored a headed goal from a corner kick.

Linlithgow keeper,Mathew Wallace, almost kept the header out, but the assistant referee signalled that the ball had crossed the line giving St Ninian’s their early lead.

When St Ninian’s HS midfielder, Sean Fyfe, scored a sensational long range curling effort into the top corner of the Mount Florida end goal it looked like the Giffnock side had retained their hold on the oldest competitive school cup in world football.

Linlithgow’s keeper and captain Mathew Wallace could do nothing to keep out a spectacular strike which gave St Ninian’s a 2-0 lead with only twenty minutes remaining.

Linlithgow re – grouped well, but nobody in Hampden thought that Linlithgow would produce a sensational, spectacular comeback as the clock showed 85 minutes played. Nobody that is except the Linlithgow Academy players.

Joe Porteous stuck to his task and scored in the 85th minute for what looked like a consolation goal in a final that Linlithgow had contested well but were two goals down.

In desperation and well in to added time keeper Wallace ventured up into the box. His presence worked out perfectly and Gabriel Wylie forced the ball over the line to score an incredible equaliser.

As the referee, Tayler Martin, who had a very good match, blew for time up both teams prepared for the dreaded penalty shoot out that would decide the final.

After eight perfect penalties it was still all square. At this point Mathew Wallace, the Linlithgow skipper who was capped this season for the international schoolboy team, stepped up to take a penalty. His kick was dispatched in style and a moment later he saved St Ninian’s 5th penalty kick. The save gave Linlithgow player Kerr Robertson the chance to win the cup for his team.

A cool penalty sealed the deal and with a fantastic comeback Linlithgow Academy won the cup and added their name to the list of winners from 1904.

The conduct and effort of the players from both schools was excellent and the referee’s team were also excellent in what was a memorable final with a sensational ending.

Highlights from the game