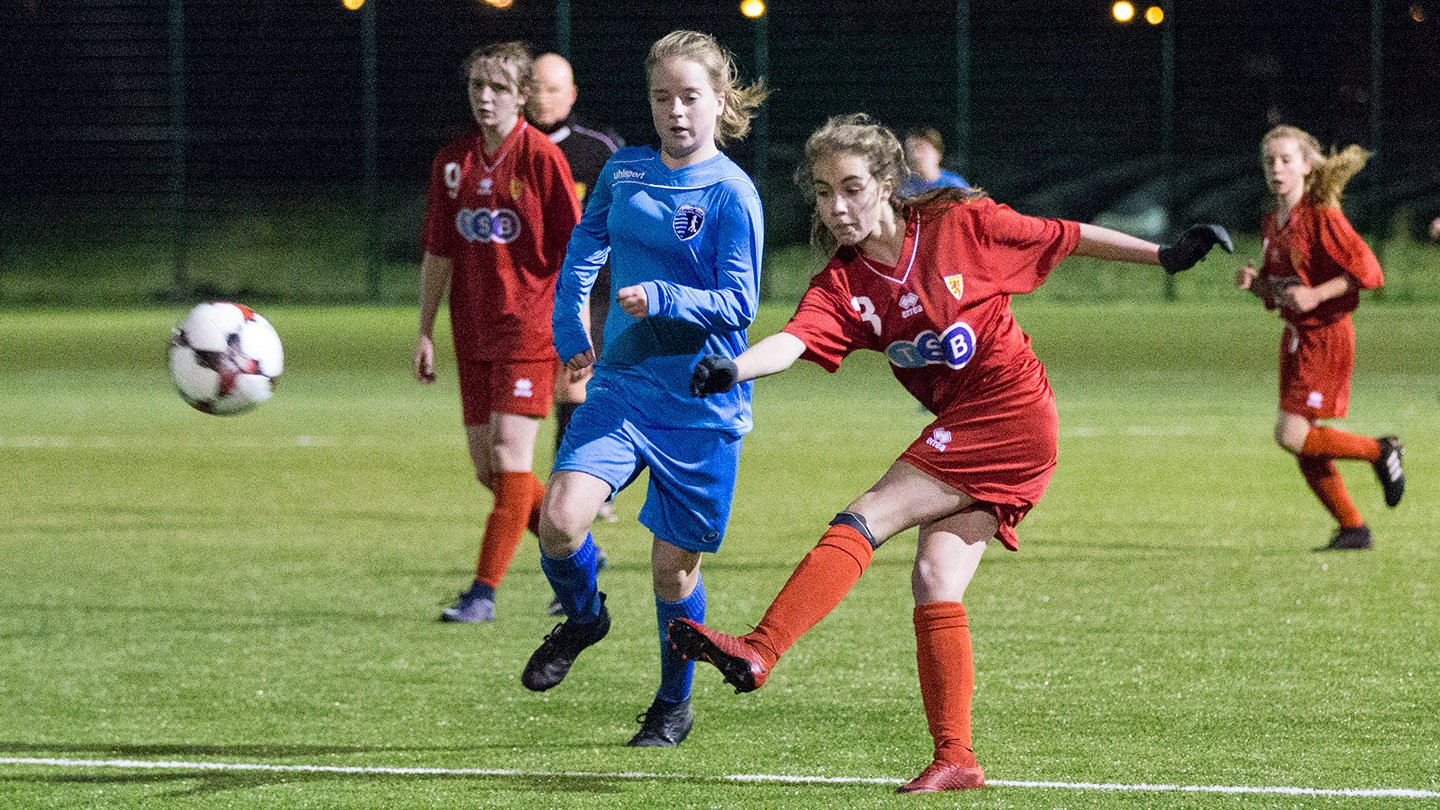 Girls start with a win

The newly formed Scotland schoolgirl’s squad had their first preparation match against Central Academy Girls on the 24th January 2018 at Little Kerse. The new astroturf pitch was in perfect condition for the first run out of the team.

This was the first time that the players had been together since the training session had to be cancelled due to the Scottish weather.

The squad were missing Eilidh Adams who had picked up a slight injury, but all the Scottish players were keen to show the expectant crowd what they could do.

From the outset the Scotland girls captained by Robyn McCafferty took the initiative and set up camp in the Academy half.

There were obvious nerves for this young team but with Rebecca Mc Allister pulling the strings in the middle of the pitch and both Ellie Jai Reid on one side and Maria McAneny tormenting their opposite numbers it was only a matter of time before Scotland got the breakthrough.

The Academy defence showed both bravery and resolution holding out until the 20th minute when Lynsey Baillie fired in a fierce dipping shot from distance which crashed off the bar and Bayley Hutchison was first to react to score from the rebound.

The goal settled the Scots and Olivia Potter had the next opportunity as she combined well with Maria to set up a shooting opportunity for herself from a tight angle. The shot was well held by the Central keeper on this occasion.

Kate Nicholson now got into the act, driving forward and shooting from the edge of the box but again the keeper was well positioned to deal with Kate’s powerful strike.

The back four of Mirin Easdon, Jenna Penman, Robyn and Lynsey were settling into the game and were confident in dealing with the attacks that the Central girls posed.

Gail Gilmour in the Scottish goal was happy to deal with back passes and was not called into serious action as the girls started to settle and pass the ball around.

The Academy girls held out until the end of the 1st period only to see half a dozen new girls arrive on the pitch ready and keen to show what they could do.

One such new player Rosie Mc Quillan had an immediate impact converting her trademark goal from distance after a mazey run from the right wing.

The onslaught on the Academy defence continued with Kirsty McLean and Monica Forsyth keen to get in on the action. Both were instrumental in providing the ammunition for the strikers.

Both Rosie and Olivia were working well with each other linking with the wide players of Ellie Jai and Rebecca who were now confidently taking on the full backs on both flanks.

Mirin had moved to the left and Jessica Broadrick was now overlapping and providing width on the right-hand side.

The Scots were now getting into gear and providing the large crowd some entertaining glimpses of hopefully was is to come from this team.

The defensive unit which now had Paige McAllister organising and driving players in front of her forward was all that the Scots needed and if it was not for the woodwork on a few occasions, some good goalkeeping and a little bit of luck in front of goal then the Scots would have added to their goal tally.

However, they continued to drive forward and make some very good chances. As Alicia Yates came on for Gail midway through the second period it was clear that the Scots were starting to work with each other as the link play was there for all to see.

The third period got underway with another raft of changes of personnel and this time a change in formation.

The adaptability of the squad looks good even in its infancy and the players adapted to their new roles quickly.

Bayley started off the period with an excellent goal that showed the pace and movement that this team has in abundance.

Rosie quickly made it two goals apiece with her fellow striker Bayley after a fine through ball from Lyndsey.

Bayley made it five with a crashing left foot finish after a lovely series of passes from Scotland’s midfield.

The Scottish midfield was now being orchestrated by Kirsty with both Monica and Kate providing the solid foundation for this attacking unit to go forward.

The defensive three of Jenna, Paige and Robyn were seldom troubled but they always had to keep alert and ‘switched on’. They were happy that Alicia was fully concentrating as she had to race out of her goal to clear the ball that was played beyond the Scots defence midway through the period.

Both Jessica and Lynsey provided the width and peppered the box with telling crosses throughout the period.

The 8th and final goal came from Lynsey with another fine strike from distance to finish off a very encouraging start for the International squad.

The game provided an important positive start to the campaign for the new group and it was a delight to see the direct passing and movement off the ball all over the pitch.

However everyone involved knows that there will be tougher challenges ahead including two friendly Internationals against the Bob Docherty Cup holders Wales in two weeks’ time.