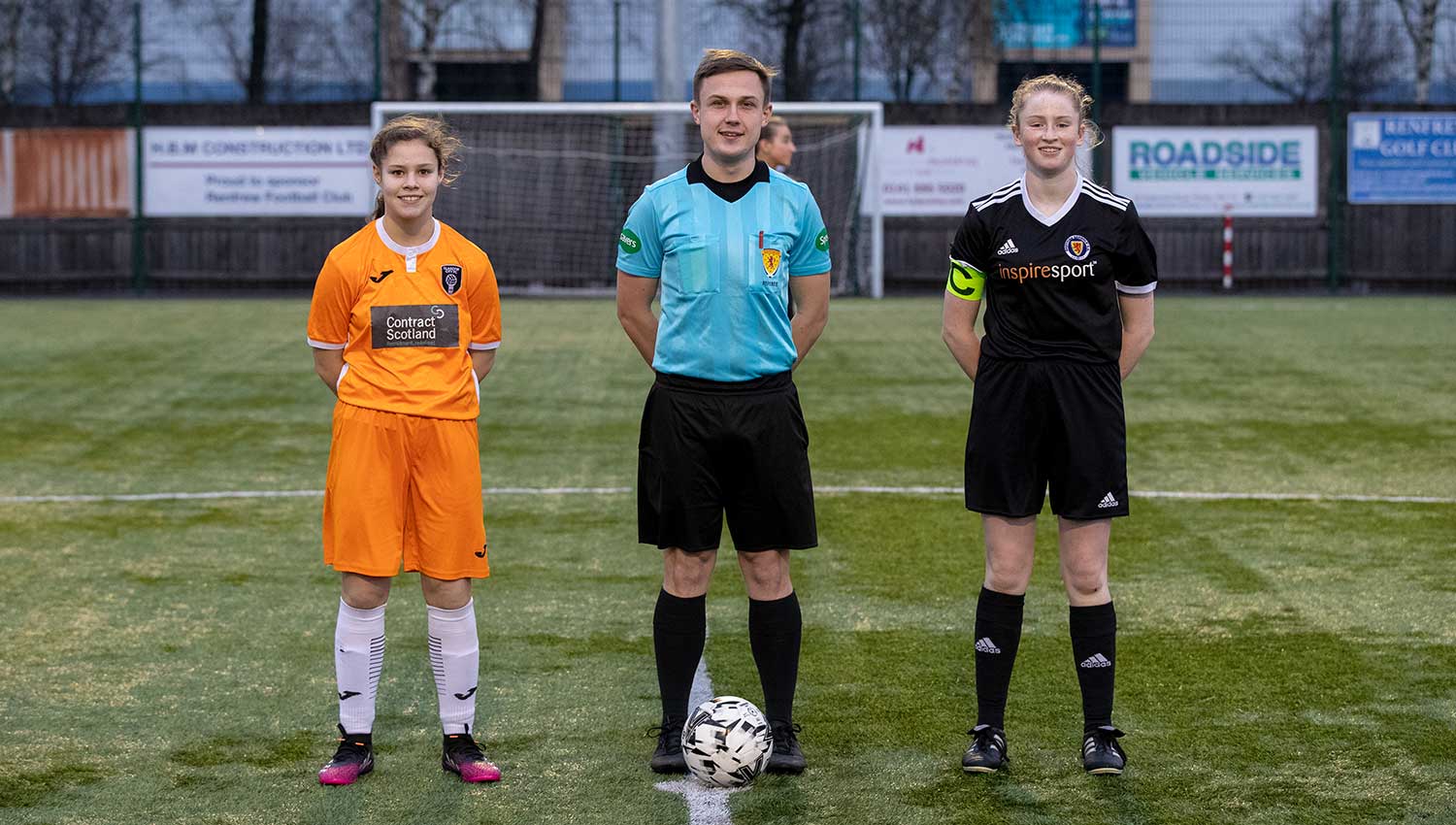 Girls Continue Build Up for Belfast

Scotland continued their build up to their first International game of the season with a friendly against a young Glasgow City side at Renfrew FC on Thursday afternoon.

The girls were hoping to build on the strong performance, last week, against Boroughmuir High School.

As with the previous match, the entire squad would get game time and positions would be rotated to see how different combinations would work.

The starting eleven for the first half was Emma Thomson in goal, a back four of Mia Scott, Lily Boyce, Kate Fraser and Mia McArthur. Midfield consisted of Lucy Barclay, Gigi Bradford, Sophie Timlin and Holly Daniel. The two strikers were Freya Brien and Isabella Conreno.

Heavy rain and string winds were forecast for Renfrew by 4pm. Glasgow City kicked off with Scotland facing a strong wind, but no rain … yet.

The girls were still learning how to play with each other and how to move and support the patterns of play coach David Thomson was asking of them. Despite that, they created a number of chances in the opening minutes of the game, forcing the Glasgow City keeper to pull off a series of fine saves to deny Scotland the opening goal.

Holly Daniel on the left and Lucy Barclay on the right were causing the City defence all sorts of problems with their fast direct running.

Five minutes into the game, after great play by Holly Daniel down the left wing who then cut inside and played the ball to Lucy Barclay. Lucy stepped onto the ball and fired off a low shot which was saved by the City keeper low at her near post.

Scotland continued to take the game to City with Gigi Bradford and Sophie Timlin controlling the midfield. The forward duo of Freya Brian and Isabella Conreno was proving very effective with both players creating chances with their fast direct running.

In the eighth minute Scotland opened the scoring when a cross by Lucy Barclay was deflected past the keeper into the net.

Scotland continued to dominate the game and were now beginning to move the ball around the pitch with confidence despite the blustery conditions. The only negative was the number of offside decisions as they attacked. Something to work on in training.

Ten minutes in, Mia Scott, went over on her ankle during an attack and was replaced by Lily Boyce moving to right back and Olivia McStay coming on at centre back.

After initially being pushed back in their own half, the Glasgow City side began to force their way back into the game with some good inter-passing in midfield. They has a number of attacks but the Scotland back four of Mia Scott, Lily, Boyce, Kate Fraser and Mia McArthur were compact and well organised, denying Glasgow City any scoring opportunities. Emma Thomson, in goal, was not called into action many times in the half.

In the 25th minute Scotland were awarded a penalty when Isabella was impeded by the keeper. Isabella stepped up and sent the ball low to the keeper’s right to double Scotland’s lead.

Despite being younger, Glasgow City continued to press Scotland. They kept a compact and high line as they caught the onrushing Scotland forwards offside on more than one occasion.

In the 30th minute Scotland added a third. After some lovely passing through the middle by Gigi Bradford and Sophie Timlin, Gigi played a through ball to Holly Daniel who drove into the City box and smashed the ball past the keeper into the net. A well worked and well taken goal.

Scotland, by now, were playing with confidence. The back four, although not really tested much , were solid in defence and intelligent in creating attacking phases. The midfield four were passing and moving well and the front two were supporting each other and creating scoring opportunities.

There were no more goals in the first half.

The starting eleven for the second period consisted of Erin Halliday in goal, a back four of Lily Boyce, Kate Fraser, Olivia McStay and Millie Scott. Holly Daniel, Mia McArthur, Sophie Black and Sophia Martin in midfield. Up front was Freya Brien and Laura Berry.

The forecast heavy rain and driving wind certainly did not disappoint for the start of the second half.

Scotland started the second half with determination.  The new forward duo of Freya and Laura determined to have an impact.

A minute in and Scotland added a fourth.  After a six player passing move, which started inside Scotland’s box, Sophie Black was through one-on-one with the keeper. The City keeper prevented the shot only for Laura Berry to get to the loose ball and move it to Holly who struck it into the net.

With the driving rain behind them Scotland continued to dominate the game.  The new midfield four of Holly Daniel, Mia McArthur, Sophie Black and Sophia Martin were building up an impressive understanding.

The forward pair of Freya Brian and Laura Berry were superb in front of goal. The young Glasgow City players gave their all but could not cope with the pace and power of Freya and Laura.

Although not tested much in the second half the defensive back four of Lily Boyce, Olivia McStay, Kate Fraser and Millie Paton combined together very effectively and added much to the attacks.

The game finished with Scotland comfortable winners on an horrendous, weather wise, night for football.

Overall the coaches were pleased with how the girls combined with each other and how they implemented the game plan so well in driving rain.

Next weekend the squad travel to Belfast to take on Northern Ireland Schools in a friendly match at Larne F.C.