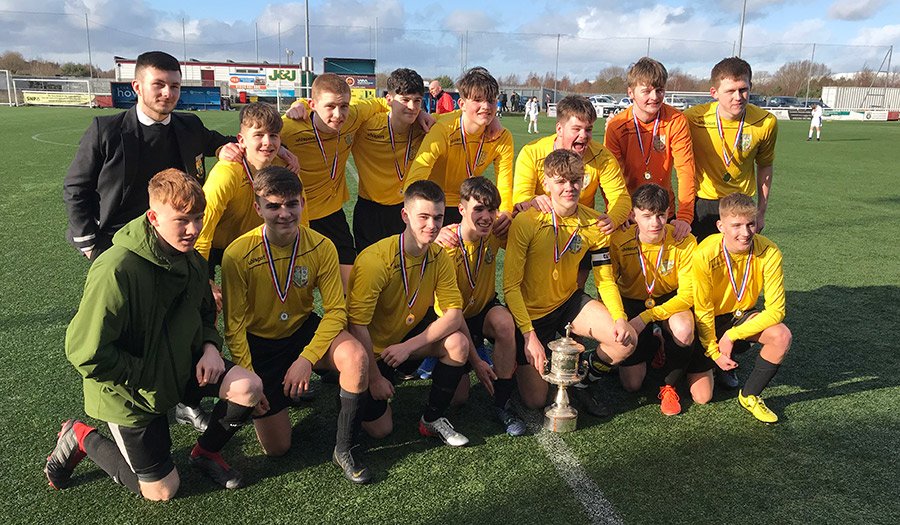 Forth Valley League Play – Off Finals

Ochilview Park, Stenhousemuir FC was the venue for the Forth Valley Schools’ FA League Play- Off Finals with two matches played on Tuesday 25th February and two more on Thursday 27th February.

Tuesday’s games at u15 and then u14 level saw Wallace HS complete a championship double as they triumphed over Larbert HS and St Modan’s HS.

The u 15 Final was a repeat of last year’s u14 final and produced another closely contested game.

Larbert took the lead after 17 minutes when a superbly struck twenty yard free kick from Kyle Houston found the back of the net.

In the second half Wallace just edged control but it took a goal two minutes from time to draw the teams level.

Aaron Duffin finished in tidy fashion from close in to take the final to a penalty shoot out.

Wallace HS won this shoot out 4-2 with important saves from keeper Cameron Moreland.

After a well refereed game by Euan Donaldson, SFA Central Regional Manager presented medals to both teams and the under 15 league trophy to Wallace HS.

The Wallace HS u14 team were keen to copy their schoolmates in their final against St Modan’s HS.

They made a great start when forward Ben Harley headed home from an early corner kick after only a few minutes play.

The same player took advantage of a goalkeeping error to tap home at the back post midway through the half.

Immediately from the half time restart Wallace High’s David Scott shot from inside the centre circle and the ball flew into the net.

It looked like an easy win for Wallace but St Modan’s never gave up.

Martyn Hamilton netted from close in just before time up and they almost scored again before the final whistle from referee Fraser McKay ended the game to secure a terrific League Championship double for Wallace HS.

The medals and trophy were presented by FVSFA President Mr David Eccles.

On Thursday 27th February the teams from Graeme High and Denny High contested the Senior League Play Off.

In a very good match it was Denny who came out on top winning 2-1.

After a goalless first half Denny took the lead four minutes into the second period. Robbie Weir played a lovely pass to Josh Brown whose clever finish found the net. With 18 minutes on the clock Robbie Weir struck a terrific 25 yard volley to give his side a 2-0 lead.

Denny High’s keeper, Rhys Wilson had made a number of good saves in the first half and he continued to do so again in the second half

With a few minutes to go Graeme got a goal back but Wilson made a last minute save from close range to secure the cup winning victory for his side.

Stirling High School made a fast start to the under 13 Final against Larbert HS which followed the Senior game.

Callan Ledingham scored after only 3 minutes and his team mate Gavin Dick added a second in the seventh minute to give Stirling a 2-0 lead.

To their credit Larbert High knuckled down and had their reward when in the last minute of the first half, Luke Rodden netted to make it 2-1.

A long range free kick from Ethan Merrit gave Larbert an equaliser and a penalty shoot out looked likely.

However, Logan Martin of Stirling High snatched a late winner for his side.

Two days of excellent schoolboy football, played in competitive but sporting fashion brought to an end to the League competitions for Forth Valley Schools FA.

Now for the cup competitions