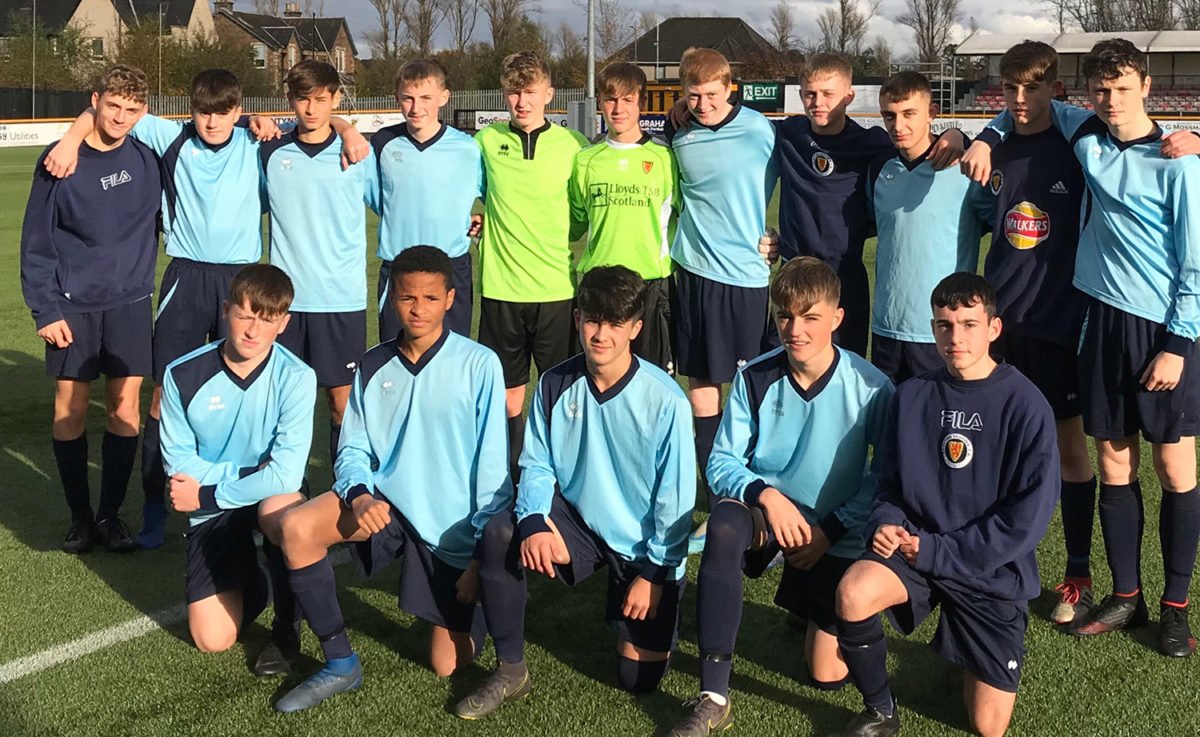 Forth Valley 15’s Qualify for Quarters

In a three team group, both Lanarkshire and Forth Valley had secured a victory over West Lothian.

This meant that the winner of Wednesday’s game at Hamilton Palace between the two association teams would decide who topped the group.

A great game was the outcome as both teams played football of a high standard in a game in which an excellent referee never had to use his cards. A great advert for school football took place with the visitors, Forth Valley SFA winning in a 3-2 victory.

Forth Valley made the best possible start and took the lead in the first minute. Finlay Barr (Wallace HS) won the ball in midfield. He played in wide man, Cameron Morrison (Alva Ac) who in turn played the ball to Greg Harrower (Balfron HS). Harrower finished in style with a well hit shot.

If the visitors thought that they were in for an easy afternoon, the home team made it clear they had other ideas.

A close contest resulted and Lanarkshire equalised when they capitalised on some indecision in the Forth Valley defence. Mitchell Robertson scored the goal that brought the teams level.
In an incredible spell just before and just after half time Forth Valley hit the woodwork four times and Lanarkshire also cleared one off the line.

But at 1-1 it was anyone’s game to win. Both Campbell Tully (Dunblane HS) and Jake Henderson ( Graeme HS) were solid in defence – in particular Henderson who looked so composed.

It was his school mate Ryan Duncan who changed the game in the visitors’ favour in a five minute spell.

He firstly dribbled in field into the box and found space to send his shot beyond the keeper and in off the post to give Forth Valley a lead.

A few minutes later he linked up down the left wing before firing in to the roof of the net for a spectacular finish to give his side a two goal lead.

Forth Valley were able to use all five subs while Lanarkshire were limited in numbers. The home team never gave up though and they scored a second goal when a shot going wide deflected in off the Forth Valley defender to beat keeper Dean Wilson.

This made for a fairly nervous finish for Forth Valley but they managed the game to secure their top position in the section.

Lanarkshire will also qualify in second place and will face an away quarter final tie.

Well done to all the players who played in an excellent schools’ football match and to the staff that give the boys this opportunity.