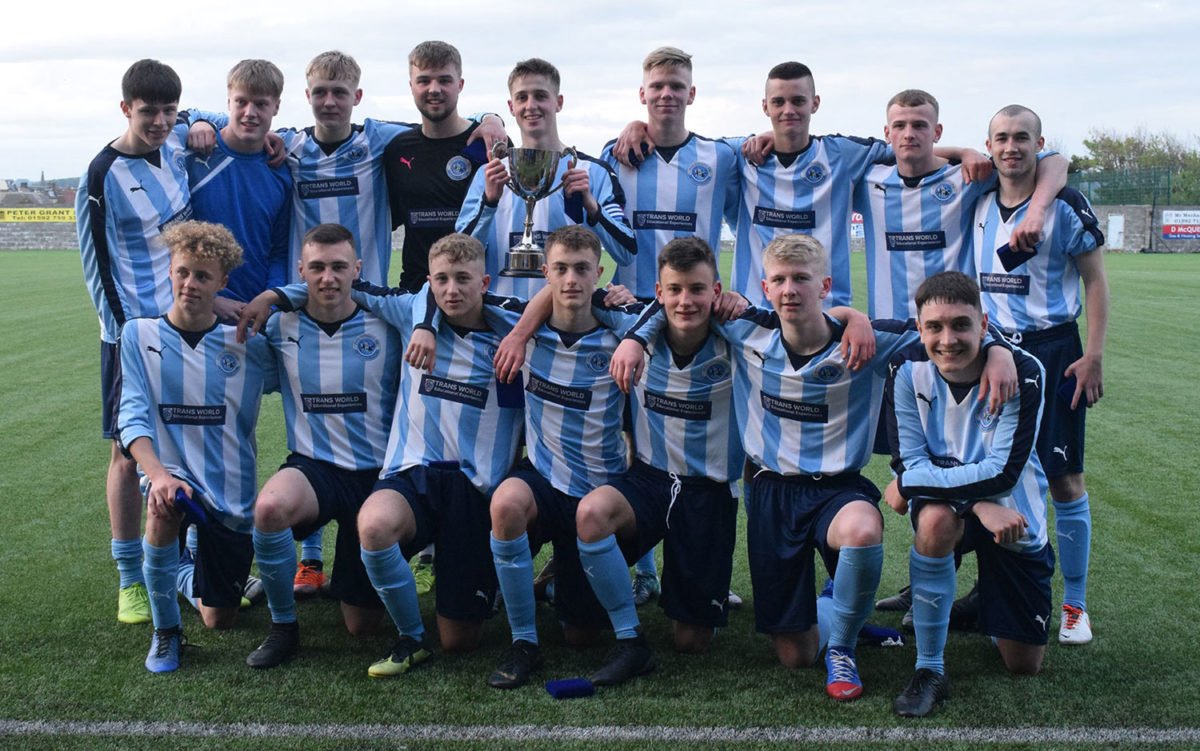 The bright sunshine that shone over the New Bayview Stadium in Methil brought the silverware home for Fife SFA as they secured victory over Dumfries and Galloway in the final of the SSFA Senior National Trophy held on Friday night.

In a well contested match, Fife deservedly won the game 2 – 0 but D&G can be proud of the efforts of their representative side who played well. The D&G team undoubtedly suffered from fatigue as the game entered the final twenty minutes. They had played a tiring 90 minutes in the semi final of the competition only on Monday as they played Dundee SFA in a much delayed match.

Down 1 – 0, Dumfries and Galloway were throwing all they could at Fife as the game drew closer to time up. In the final minute Fife striker Quinn Coulson (Queen Anne HS) who had looked a goal threat previously cleverly clipped the ball over Craig Burns ( Stranraer Acad) to seal the Fife win with a delightful goal.

In a goalless first half both teams had had their turn in command but neither could find a goal. Fife midfielders, captain Liam Newton ( Kirkcaldy HS) and Ronan McMurchie ( St Columba’s HS), had looked clever on the ball as Fife dominated for a spell after a nervous start for both teams. The Dumfries defence however , led by SSFA international schoolboy cap Jamie Thomson ( St Joseph’s College) looked comfortable.

D&G had their chances also and they hit the post in the 17th minute with a scrambled effort and Connor Potts ( St Joseph’s) shot straight at Fife keeper Ben Swinton ( Bell Baxter HS). Liam Douglas ( St Joseph’s) hooked just wide of the post from a Dom McMahon corner. At the other end Quinn Coulson brought the best out of keeper Burns with a near post header.

Half time arrived with the teams deadlocked at 0-0.

In a lively opening to the second half both teams had half chances but it was Fife who opened the scoring with a well taken goal.

Jason Watson ( Levenmouth HS) received the ball on the right wing. He took on his opponent in driving to the goal and hit a terrific shot high into the top corner to open the scoring in the 48th minute.

D&G coach Jack Steele made substitutions as he changed his formation in going to a back three, bringing on Tom Sykes (LockerbieHS) and Aidan Dobie ( Wallace Hall Acad).

The Fife Schools FA coaching team of Gary Cunningham, Conor Little and Gavin Moffat also made changes to ensure that all their squad players could take part in the final.

Dumfries forward Aiden Kerr (Dumfries HS) tried an overhead kick that went just wide and Liam Douglas shot straight at the keeper. Full back Chris Newbould (Lockerbie Academy) shot over following a great move as they searched for an equaliser.

It wasn’t to be for the far travelled Dumfries team as Coulson scored his last minute goal to make the final score 2- 0 to the Fife Schools FA.

SSFA president Mr Andy English was especially pleased to hand over the trophy to Fife as he himself is a teacher at Kirkcaldy HS. He thanked the crowd for their support, East Fife FC for their help in staging the final, the match officials Paul Taylor, Euan Donaldson ( both ex East Fife players) and Fraser McKay and of course both teams and staff for what was an excellent final.