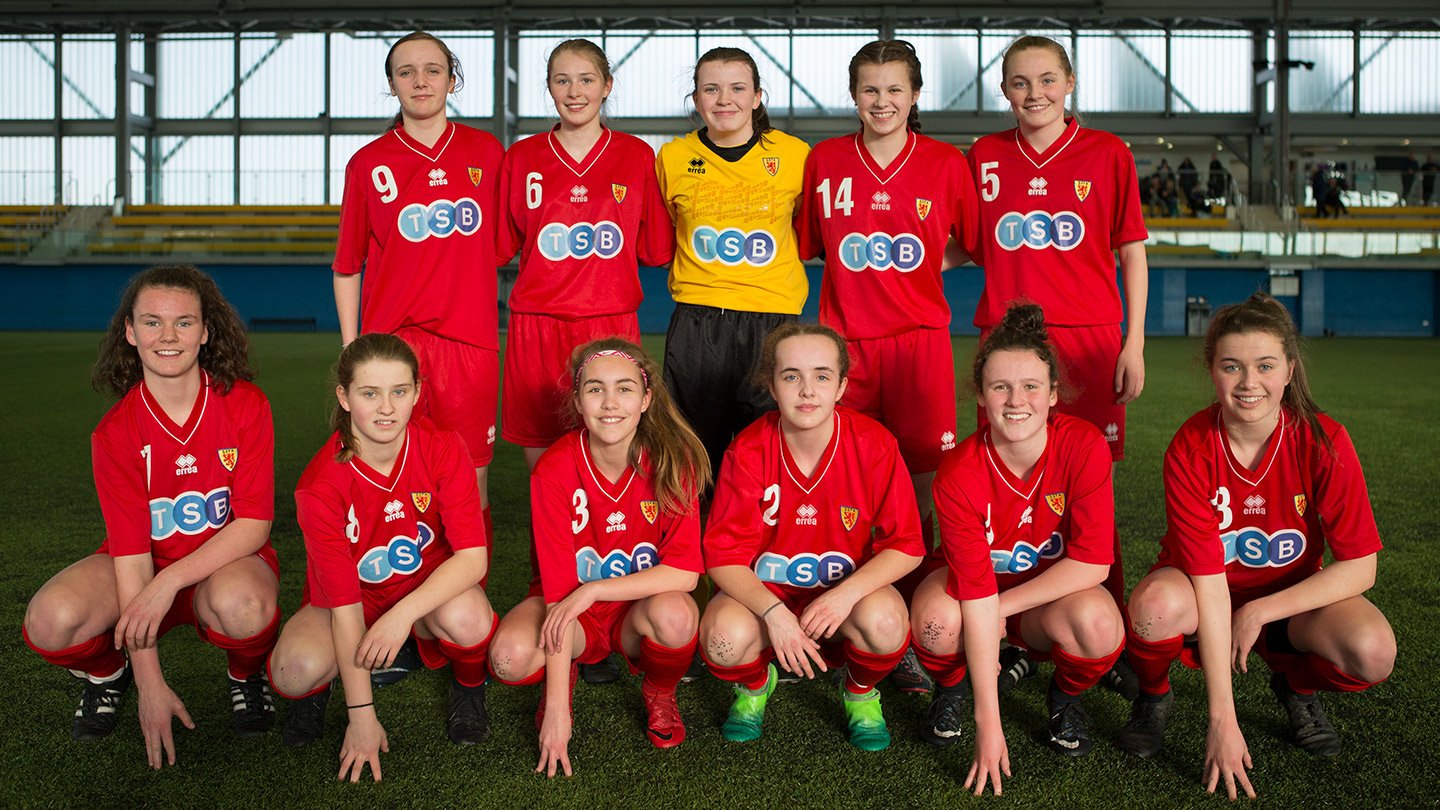 There was a buzz of excitement at Toryglen for today’s eagerly awaited encounter between a very strong looking Glasgow City side and the SSFA U15 girls.

It was great to see four of the starting eleven for City being ex-SSFA players from last year. Carly Ginasoli, Hannah Scott, Laura McCartney and the captain Karsey McGlinshey had all progressed to representing the SFA u16 team in their recent Internationals.

The game started at a great pace and tempo where both teams wanted to get forward straight from the first whistle.

The older Glasgow side started brightly with Karsey getting herself into good deep positions, passing the ball into dangerous positions, however the schools’ defensive back line were enjoying the challenge with Paige, Jenna and the captain Robyn quickly organising themselves into a solid defensive unit that was going to be very hard to get through.

The central midfield trio of Rebecca, Kate and Monica again quickly adapted to the Glasgow formation and began to penetrate the oppositions defence with some excellent interplay and positive passing.

Indeed, it was from one of these passes from Kate that set Bayley away in the inside right channel, but on this occasion Bayley’s ball to her strike partner, Eilidh was just behind her after leaving the two defenders in her wake. It was great to see the striking partnership linking so well in the final third of the pitch.

Unfortunately, the Scots had to change personnel early in the first period as Monica could not shake off an earlier knock.

However, she was replaced by the effervescent Kirsty who not only hit the ground running but added to the attacking options that Scotland had.

As the half progressed it was clear to see that the game would be won by the team who made the least amount of unforced errors and who took their opportunities when they came along.

There was a scare for the Scots as they rearranged the defending duties at a corner letting the Glasgow striker get a free header from the central position. (They will certainly need to look out for these ‘moonwalking bears’ over in Ireland).

However, Alicia made a miraculous save on the line to keep the game level.

The young Scots took heart from the keeper’s heroics and moved onto the front foot with driving runs from Kate and Rebecca as well as the width and desire from both Jessica and Lynsey in the wide positions attacking their opposite numbers, a pleasing site for the large crowd.

It was from this desire to attack the ball and drive forward that produced a goal of exceptional quality.

Jess attacked the ball that was played out by the excellent Glasgow keeper.

She won the ball early and played the ball swiftly to Eilidh who had came short to the ball.

Eilidh held the ball up and played an excellent pass into the path of the marauding Jess.

Jess took one touch and then delivered a delicious ball into the box which was met expertly by Bayley who volleyed the ball into the net.

The players congratulated both the scorer and the provider with as it was an expertly crafted goal.

Not long after the Scots had deservedly taken the lead there was a moment of concern for the Scots as from an innocuous challenge Paige clashed heads with her opposite number. ‘Rocky’ played on but it was clear to see that her eye was starting to close.

Before the half finished the Scots again won the ball from open play and drove forward.

This time the combination of athleticism and desire gave Rebecca the opportunity to bear down on goal. After some deft touches to glide past the central defenders she powered a great right foot shot at goal.

The keeper again did very well to get into position to block but on this occasion, Rebecca was the first to react and coolly slotted the ball home with her left foot.

It was another fantastic goal to end the first half play.

The young Scots had deserved the goals and had demonstrated all over the field a desire and appetite to battle and play positive attacking football.

The second half started with changes in both personnel and formation. Gail came on for the impressive Alicia in goal. Mirin came in at right full back with Ellie Jai and Maria playing as more orthodox wide players. Rosie replaced the energetic Eilidh up front.

The new players hit the ground running with Gail first of all called into action with a smart save and safe hands as the team reorganised quickly.

Robyn and Jenna played as a central defending partnership with Rebecca sitting in front.

Kate who was slowly losing her voice kept the midfield solid and Rosie dropped between the lines to help with the extra body that Glasgow had in the middle of the pitch.

Maria started a lovely move with Lynsey on the left-hand side and delivered a great ball into the box only for Bayley to have her shot saved by the impressive keeper.

Next it was Ellie Jai’s turn to attack her opposite number and link up with Rosie. Her pin point pass let Bayley get her shot away but on this occasion the ball fell the wrong side of the post.

Olivia came on for Kate in the engine house in the middle of the pitch and got directly into the action, however on this occasion her pass just alluded Maria who had darted inside the fullback.

The introduction of Kirsty back into the fray led to the final positional play seeing Mirin moving inside to form a new back three with Robyn and Jenna.

The game was progressing very well for the Scots with good chances being made and with a little bit of luck they could have added to there two goals.

However, it was Glasgow who got the final goal of the game as a through ball eluded the central defenders for Hannah Scott to latch onto and as she did so successfully for the schools’ team last year. She did not need a second invitation to coolly lob Gail and place the ball into the net.

It was a goal that on the surface looked to have made the game closer than it was.

Overall an excellent team performance and a fully deserved victory for the SSFA squad.