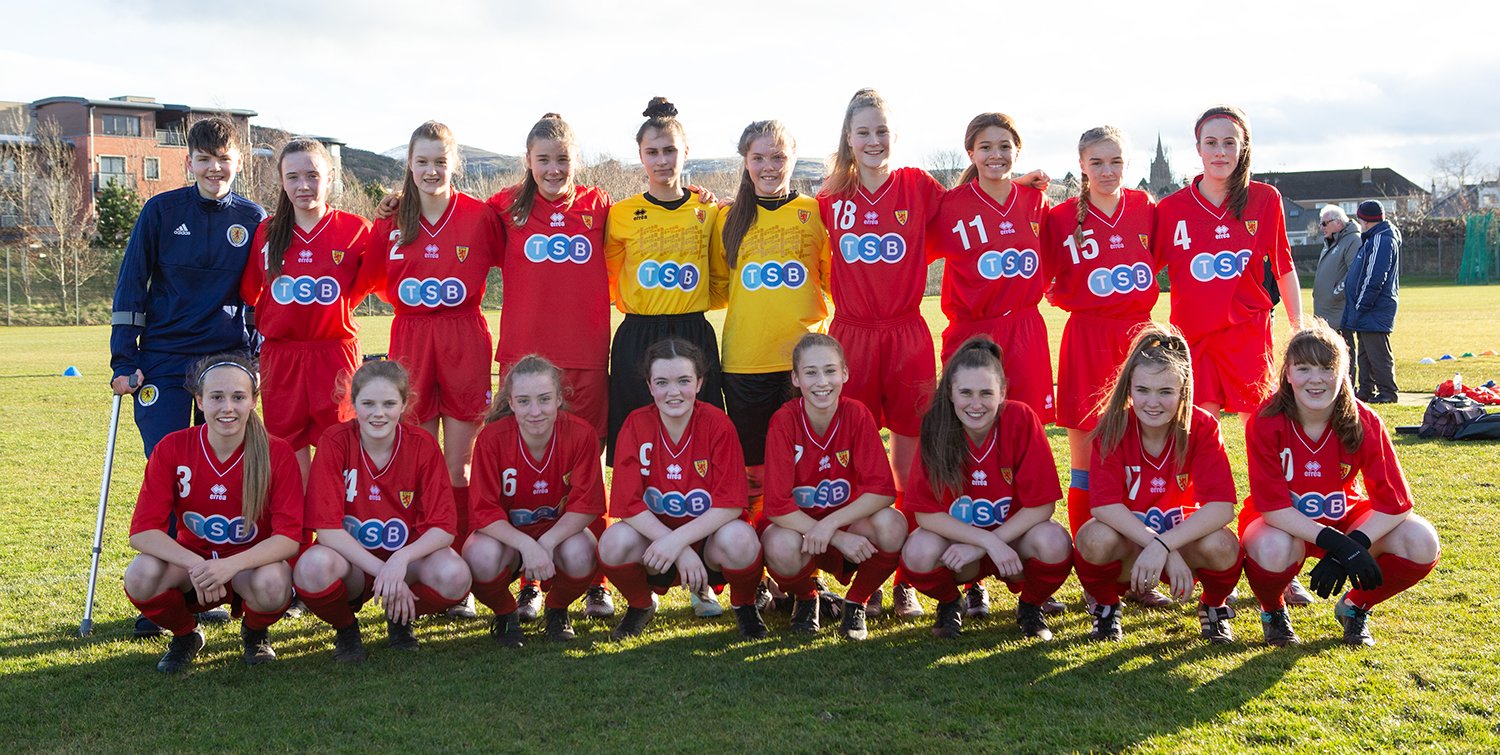 The Scottish schoolgirls’ final domestic preparation game got under way at Meggetland in Edinburgh this Tuesday in very trying conditions on a wet and heavy grass pitch with an awkward and very strong crosswind.

The opposition were a physically strong and technical Boroughmuir under 19 squad, who include two ex-SSFA U15 players from last year’s squad. It was great to see both Teigan and Elvie playing with such confidence.

The Scots started with Annalisa in goals and a back four of Eilidh, Millie, Madilyn and Niamh.

Lily had taken a knock at her club game at the weekend and although she ‘kicked ‘every ball she watched from the side-line. Kirsty played in front of the four with Tiree, Olivia, Ami and Caitlin playing in the midfield. Jodi played as the main striker.

From the early exchanges it was obvious that the conditions were going to make for a difficult day.

The ‘sticky’ heavy surface held the ball up as both teams took time to get into the ‘pace’ of the pitch.

The young Scots attempted the get the ball down on the surface and pass it around.

Kirsty, the captain again for the day, pushed and probed as she attempted to get Tiree and Caitlin into forward positions, however the well drilled and powerful Boroughmuir defence were proving to be both resolute and a well-drilled solid unit.

Both Madilyn and Millie had to be on their toes as the Boroughmuir central striker was proving to be a hand full with her electrifying pace, however they were showing that they were more than a match and a very combative solid partnership in the heart of the young Scots defence.

Caitlin and Niamh continued to work down the left-hand side with both Tiree and Eilidh dovetailing on the right.

Ami and Olivia were working in little pockets behind the ever-willing running of Jodi.

The frustrations of the heavy pitch and strong wind were stopping the usual passing strengths of the Scots.

Passes were over hit at times and the ball was sticking under foot but it will be the surface that the girls will play on in the Bob Docherty tournament and hence a very worthwhile run out.

The Scots pushed forward as the game settled. Ami attempted to link up with Jodi with a lovely through pass but the pitch played its part as the ball bobbled away from the young striker.

Next, Tiree looked to run at her defender but again the ball just did not run true to her usual stride length and another opportunity passed.

Eilidh continued to drive forward into great areas but there always appeared to be a block or a header from the Boroughmuir defenders, with Teigan and her team mates demonstrating a desire to keep the Scots away from their goal.

Jodi made a chance for herself but on this occasion the goalkeeper showed a very safe pair of hands.

The left-hand side were linking up well as Niamh fed Caitlin and vice versa on many occasions but the crosses were just not finding their intended targets.

Gradually the Boro midfield players got into the game in an attacking sense.

Annalisa had been relatively untested to this point. She was solid and confident and kept her defenders on their toes throughout.

However just as the game was getting close to the half time whistle the ball broke from a half clearance to Elvie at the edge of the box.

She looked up and as the defenders were just not quick enough to close her down, she hit a lovely strike into the left-hand top corner.

It was something that the young Scots would have to learned from in that area of the field.

The Scots responded with more attacks and shots on target but they found a very in form keeper.

Emma who had come on for Ami came the closest before the break with a great run beyond Jodi and as she fired a lovely low left foot shot towards goal, although it beat the keeper, it ended up the side netting.

The first half finished with the Scots pushing forward in an attempt to get the goal back that their play deserved.

Into the second half and the Scots made some personnel changes with Georgia, Leigha and Keira coming on with Sophia continuing ‘up top’ after she had come on at the latter stages of the first half. Ava also took over in goal.

The Scots took the game to Boroughmuir again but their defenders made it very difficult for the Scots to manipulate any space.

Leigha took on the mantle that Eilidh had left and continued to drive forward down the right flank.

She quickly linked confidently with Emma and her shot was well hit but, on this occasion, her shot just flashed across the face of goal.

It was Ava that was called into action next as she made a fantastic save with her left foot as she narrowed the angle to deflect the on-rushing strikers shot passed the post.

Boro at this stage in the match had a series of very dangerous corners and Ava again was called into action, but she continued to get strong hands and punches to clear on each occasion.

In the final quarter of the game both teams knocked on the door but the defences were solid with Georgia slipping into a centre back position with ease.

Keira at this point appeared to twist her knee as she attempted to cross the ball from the touchline.

She and Niamh were both withdrawn at this point as a precaution as Ami and Jodi returned to the fray.

Eilidh joined Millie in the centre of defence with Georgia moving back to the engine house in the middle of the park.

It was pleasing to see the younger Scots getting stronger and stronger as the game continued to its conclusion particularly in the heavy conditions.

The Scots deserved an equaliser after the work that they had put in and it nearly came as another dangerous corner was delivered from the Scots left.

Millie rose perfectly and attacked the ball. She met it well and headed towards goal, unfortunately for the Scots it came back agonisingly off of the crossbar.

The goal would have been fully deserved but, on his occasion, it was not to be.

The Scots had a strong shout for a penalty towards the end of the closely fought game, but the referee did not give it, again to the frustration of the Scots.

The game continued with both defences on top as they collectively kept strong and solid to the final whistle.

A frustrating game but a great advert for girl’s football played in an excellent spirit.

Scotland now go to Jersey for training sessions and two games against their hosts from the 14th until the 17th of the month before returning to play in Larne against Northern Ireland in the knowledge that they have been drawn against both Northern Ireland and the ‘auld enemy’, England in the Bob Docherty tournament.

Fantastic games and fantastic opportunities for all of the girls to showcase their skills at the International level.

Kirsty and Emma after the game