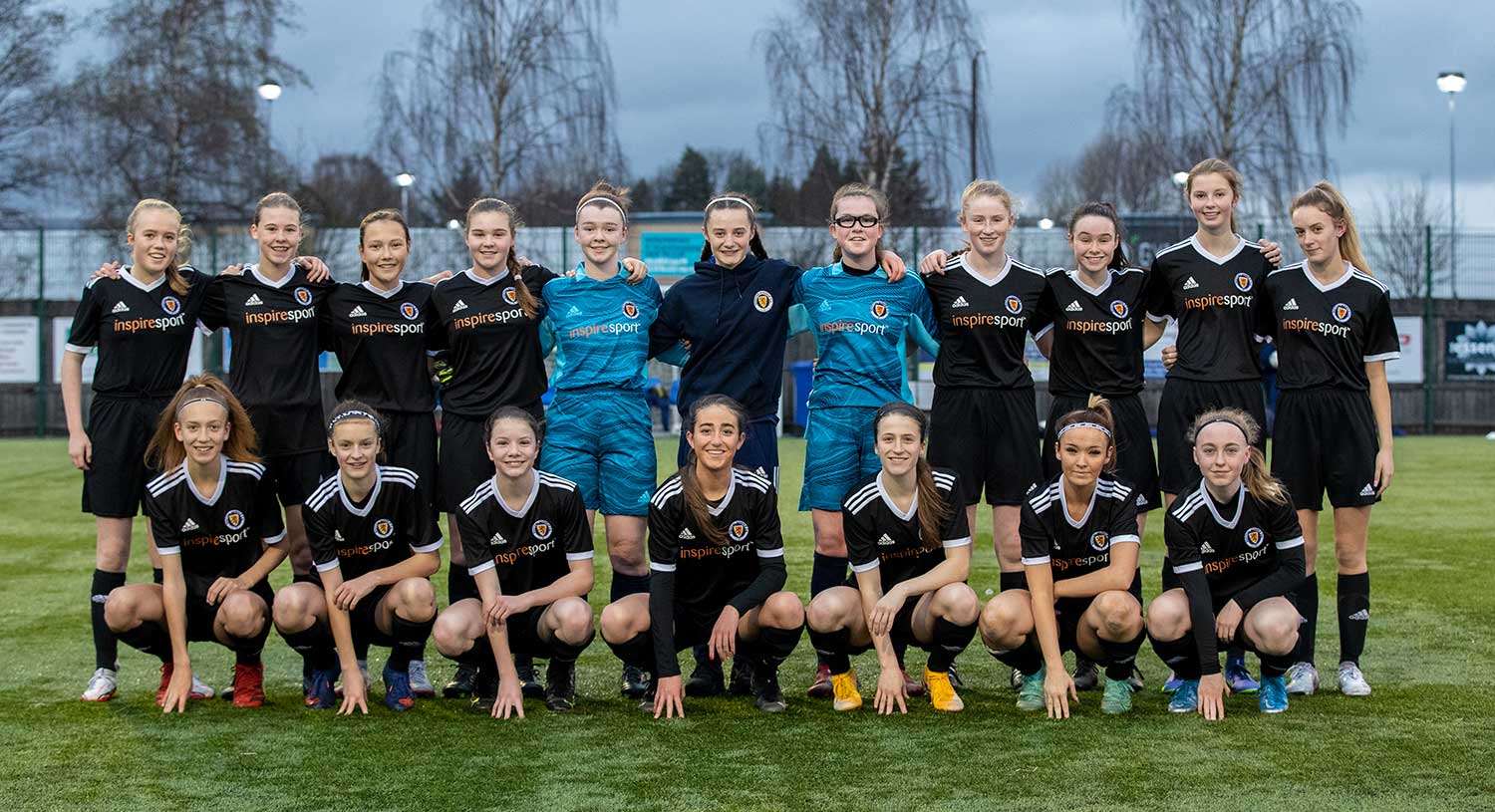 The final preparation game for the SSFA U15 girls’ squad was played out at Meggetland in Edinburgh against a strong and powerful Boroughmuir Under 19 team. It was to prove a positive and necessary test for the young Scottish Schools squad before they venture across the border to compete in the Bob Docherty Tournament.

The Scottish team started with Emma in goals with a back for of Millie, Gigi, Kate and Mia Mc. The two sitters in front of them were Lily and Olivia C with the wide berths being occupied by Lucy and Sophia. Freya played as a number 10 behind Laura as the striker. Holly was the only player that was unable to play as she was nursing an injury that she picked up for her club side the previous weekend.

The game started in bright sunshine, which would not last as typically we had all four seasons in a day. It was the home side who started the stronger as they quickly got into the stride that has made them a top four side in the country at their age group. Boroughmuir attacked the young Scots goal initially from their left winger who as a first team player had proven to be a potent asset. Millie however quickly learned to close her down and get closer to her, stopping her from turning and running dangerously towards goal. Millie also got Lucy to double up on the winger and both thrived on this challenge as the game progressed.

The Scots did take a little time to get into their own attacking stride and looked at times to take the easier option of playing back when a gamble to force the game towards the opposition’s goal might have paid dividends. The decision making at this early stage frustrated the forward running players but keeping possession at this point was proving necessary. The passes were a little rushed and the ball retention could have been improved, with the ex-SSFA player Elvie Mc Lean showing why she is also a Boroughmuir first team player. It was time for both Lily and Olivia to force themselves into the game. Indeed, it was through a combination of the two of them working together to win the ball back in the middle of the park that produced the first real opportunity for the Scots. The ball was secured and distributed to Mia Mc on the left. She looked up and picked out Sophia who took little time in sending Laura down the left hand side. Laura expertly took on the central defender who had followed her run. She made her way to the by-line and flashed the ball across the 6 yard box. The keeper got her hands to it but could only parry it into the stride of Freya who had followed up the move from the central position. Freya placed the ball with delight into the goal to give the Scots the lead.

The opposition were always looking dangerous particularly at set pieces. Corners were a test for the Scots but they got bodies and blocks in front of anything that the opposition threw at them. Lucy was starting to get behind her full back with Millie ably backing her up. Freya was also linking with Laura in the advanced positions. The game was ebbing and flowing towards both goals; however, the Scots gave the opposition an opportunity to equalise which they duly took as a pass back to the keeper was inadvertently half blocked by a Scots defender. The ball broke to the striker and with Emma out of position as she expected the pass to come straight back to her. The ball was lobbed expertly over her head by the striker. It was a blow to the young players as they had had come into the game and were indeed on top on the balance of play at this early stage. The third came to an exciting conclusion as both teams pressed for the lead. Freya had a shot that just cleared the bar and Laura continued to be a handful for a very well drilled and solid defence.

The second period started with a couple of changes from Scotland as Olivia Mc came on in the heart of the defence with Freya moving out wide and Sophie B coming into the number 10 role. The game itself continued to be fast and frantic with chances being made at both ends. The central three midfield players looked now however to have their opposite numbers covered and Olivia started to get her foot on the ball and began probing and driving Sophie B forward into nice pockets of space between the lines. Indeed, the next good chance for the Scots came from the combination of quick thinking and quick passing involving Olivia C, Sophie B and Sophia where the latter had a snapshot that narrowly passed the keepers right upright.

The pace of the game was relentless and both teams pushed for the breakthrough. The Boroughmuir keeper again thwarted The Scots forward players when Freya delivered a telling pass to Laura whose shot on this occasion was blocked well.

At this stage the Scots made more changes with Erin replacing Emma in the goal with Isabella coming on up top for Laura. Sophie T replayed Freya on the right with Mia S coming into the right back berth. The game even with the changes continued to flow and it was good to see the players quickly getting into the pace of the game.

Sophie B almost released Sophia in the left hand side but the final ball was just cut out by the Boroughmuir defence. It was pleasing to see the Scots fight and scrap for every first and second ball and their efforts were almost rewarded as Isabella got in front of her defender and clipped the ball towards goal. But on this occasion the keeper was well placed to receive it into her mid rift.

Mia S then combined with Sophie T on the right to deliver a dangerous ball across the penalty area but it just eluded Sophia who was attacking the back post. Again as the period went on it was the young Scots who were pushing for that second goal. Erin was happy to watch the play in front of her and was always available for passes back and balls over the top from the opposition. The period concluded with the Scots on top but unable to break down the resolute defence.

Not only did the Scotland team change for the third period but so did the weather. Down came the snow and hail to cover the Meggetland pitch in a covering of white. Both sets of players to their credit continued to get the ball down and play. Sophie T and Gigi took over the centre of the pitch with Isabella drifting to the left and Sophia playing the central role. Lucy played right and continued where she had left off by tormenting the home defence.

The game again settled quickly with the new positional changes and players, which gave the coached the opportunity to see players in these various positions as in less than a fortnight the full squad will be needed to play at their best over the week as they seek to compete at the highest level against the finest that England, Wales, Northern Ireland and the Republic of Ireland can offer.

Sophie T started to move the ball forward knowing that Gigi was covering as the sitter in the early exchanges. Isabella looked relaxed in the wide role and Sophia always looked dangerous. Indeed it was from a through pass from Isabella that got Sophia to sting the hands of the keeper with a great attempt from the left hand side of the penalty box. From the resulting corner Mia S attacked the ball but on this occasion the pace of the delivery just eluded her. It was great to see her attack the ball and being a threat in the opposition box.

Kate and Olivia Mc were starting to look comfortable while protecting Erin in the Scots goal. Mia S looked after the dangerous winger and Mia Mc started to push forward. The Scots again started to dominate the play and it was through this positive period that they produced a lovely passage of play through the heart of the midfield to Sophia up top. From her half turn starting position she played the ball into the feet of the onrushing Isabella. Isabella got the ball out of her feet and fired a left foot shot across the keeper and into the keeper’s left hand post. It was a delightful effort and a well-deserved goal for both Isabella and the team at this stage.

The game continued with both teams now playing on the perfect sunny conditions that they had started the day in. Millie came back on for the hard working Mia Mc. The opposition were always quick in the counter attack and the back four and Erin had to be on their toes. Unfortunately for Scotland it was after one of these counter attacks that Boroughmuir got their equaliser. It had appeared that the Scots made snuffed out a dangerous attack but an error in decision making gave the striker a chance from a loose pass and she duly slotted the ball past Erin who was left exposed. It would be a lesson to all that, especially with the tournament coming up that concentration is paramount.

The game was not over yet and the Scots although disappointed continued to press for a winner. Sophia who had one effort just clear the bar and another which the keeper was in a good position to cover made yet another chance and as it fell onto her left foot, all at the sideline expected the net to bulge, but on this occasion the keeper made a wonderful block to keep the striker out.

The game concluded in a very well fought for draw by both teams, played in the spirit that you would expect from two excellent squads. It is onward for Boroughmuir as the league splits and it is very much forward to the Scottish Schools as they look confidently in competing and challenging for the Bob Docherty Cup in Newcastle from the 10th of April.