The excitement of a game against England was there to be seen in the faces of the young players who walked proudly onto the AUL pitch on the final day of the Bob Docherty Cup. The final may have been between Northern Ireland, who had been victorious against England, and Wales, who had drawn with Scotland the day before, but for both squads today would be an opportunity to play against the oldest of International foes.

The conditions were now becoming less of an unpredictable factor as again the strong wind was blowing directly down the pitch. The game kicked off and it was obvious that even although it was the third game in as many days all of the players were going to give everything they had and nothing was going to be ‘left on the pitch’.

The Scots were playing into the wind in the first period but were pushing their English counterparts back in the early exchanges. The Scots had kept AJ Meach in goals and had reverted to the outfield ten that had started the first game against the Republic of Ireland. The back four who had been collectively solid throughout started with a confidence that had been growing over the tournament.

The impressive full backs in Hannah Cunningham and Rebecca McAllister were doing everything that was asked off them defensively as well as driving forward when possible. It is a great thought that Rebecca McAllister can join Alicia Yates and Rosie McQuillan in doing this all again in Belfast next year where their experiences will help the new Scottish Schools internationalists.

The Scots settled into their attacking rhythm and after pinball in the English box a snap shot from Chelsea McEachran was deflected for a corner. Philippa McCallum delivered again with accuracy and pace to the front post where Chelsea McEachran glanced the ball towards goal. As the crowd jumped to celebrate the opening goal, the English keeper somehow managed to get a hand to thwart the net bound effort. 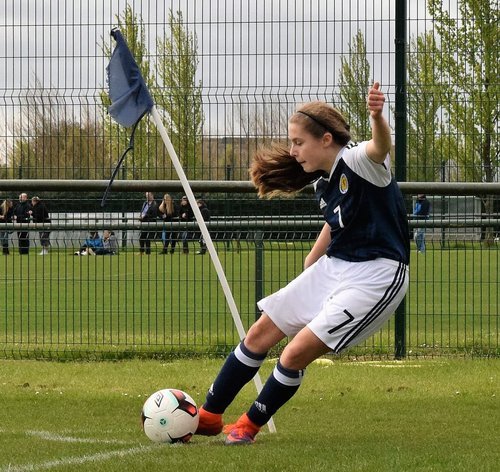 The wide players in Laura McCartney and Philippa McCallum were now delivering telling crosses and running at players and committing them into tackles. This was the style of football that the large crowd had come accustomed to from previous pre-tournament games. 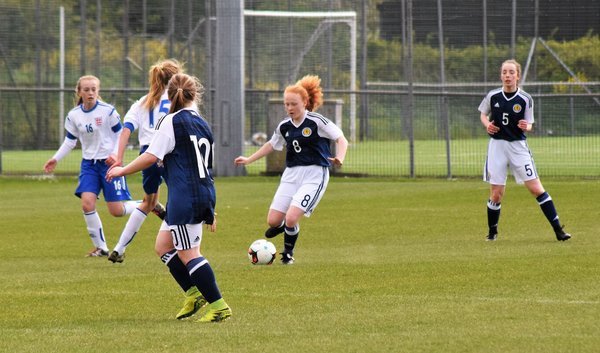 Georgia Crooks was keeping the ball and passing it with confidence however with the physical and mental demands on both Georgia and her partner in crime in the middle, Jodie Strachan, were always going to take its toll. The powerful and direct running of Kathleen McGovern however was still there for all to see as she forced the English into giving away possession in dangerous areas. From one of these she forced the retreating English defender to give away a foul. From the resulting free kick however the well struck shot was well dealt with by the English goalkeeper.

Although Scotland were knocking at the door, it was England who took the lead against the run of play. Scotland looked to have a defensive situation under control, but you cannot let your guard down at any time and concentration must be paramount. A lack of decision-making made for a heavy touch at the back and as the ball ran to the eager English striker, she lifted her head to drill the ball into the net to open the scoring for England, 0-1 (14m).

Again it was pleasing to see that the young Scots rallied and got back to playing their own game and after some excellent interplay between Hannah Cunningham and Philippa McCallum the ball was delivered into a dangerous area where the ever alert Chelsea McEachran got a powerful shot away but on this occasion the ball just cleared the English crossbar. 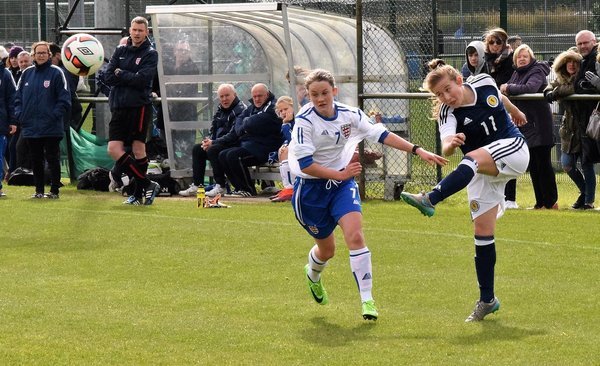 The crossbar was to come to the English rescue moments later as Cara Henderson decided that it was time to take the game to the opposition. As the ball broke out from a Scottish defensive position she picked up the ball and drove purposefully towards the half way line. As she looked around she saw her team mates were breaking from the corner that they had all just defended. Cara Henderson decided to take the defenders on herself and when the opportunity arose she played the ball towards the goal. The ball drifted over the helpless keeper. Unfortunately for both Cara Henderson and her team mates the ball struck the underside of the bar and was hacked away to safety. 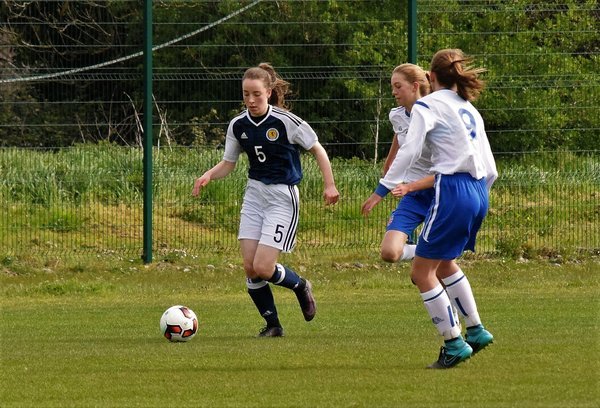 It was the positive direct approach that galvanised the Scots as they headed towards the halftime whistle. There was however still time for AJ Meach to pull off a fine near-post save from the tricky English striker, showing that you can never lose concentration at any time of the game.

Karsey McGlinchey who had come into the middle of the park for Jodie Strachan at halftime started and almost finished the first attacking move of the second half. The Scots were determined to take advantage of the wind that was now in their favour in the second half. An early Chelsea McEachran snapshot tested the keeper but she was up to the task on this occasion. The pressure on the English defence was now mounting as Laura McCartney sent in another of her many dangerous corners, unfortunately for all the Scots as they watched as the ball crash off the crossbar. Was it going to be one of those days?

Eilidh Shore and Aisha Maughan had come on to freshen up the midfield and both were heavily involved in setting up Chelsea McEachran in the opposition box, but this time after wriggling free of her marker, Chelsea blasted the ball at the keeper who was there again to stop a certain equaliser. 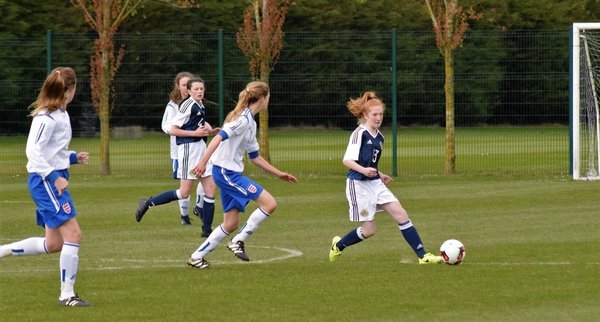 Eilidh Shore was now passing the ball in behind both English full backs and both Aisha Maughan and Laura McCartney were reaping the benefits. They both had shots across the face of goal where Kathleen McGovern was just out of reach to get a touch. Karsey McGlinchey drove forward committing opposition players and it was only a matter of time before the Scots got their well-deserved equalising goal. The ball was played from Aisha Maughan who had been tormenting the right full back since her arrival and as the skipper does expertly KATHLEEN McGOVERN rolled the English centre back and bore down on goal. There was only going to be one outcome as she blasted the ball past the helpless English goalkeeper, 1-1 (55m).

It had been a deserved goal for the effort and positive attacking endeavour that the Scots had put in for the cause. Scotland tried to win the game by bringing on Mhairi Crooks for Hannah Cunningham and drive forward with three at the back. Chelsea McEachran thought that she had done just that as she produced another piece of magic to turn the defender and get her shot away, only to see the keeper make another point-blank save.

As the whistle blew to bring this pulsating game to a conclusion it was the penalty kick scenario again. England won the toss and decided to take the first of the penalties. Amazingly after nine expertly struck and successful penalties it was 5-4 to England. Cara Henderson took the long walk from the halfway line and confidently placed the ball behind the English keeper. It was into sudden-death penalties. England again started first and scored to make it advantage them. However the Scots were again up to the task as Aisha Maughan dispatched the ball to make it 6-6.

The walk from the halfway line if you are the seventh taker always appears longer. The English player unfortunately did the cardinal sin and lifted her head when striking the ball and in doing so the ball crashed back off the crossbar. Anyone who has been in that position knows just how she felt. It is a horrible way to conclude any game. However after the initial joy for the young Scots it was the realisation that they still had to score the winning penalty. The seventh penalty for Scotland was going to be taken by one of the youngsters.

Rebecca McAllister had been magnificent in all three games and if anyone deserved to be the hero it was her. She placed the ball down on the spot and confidently sidefooted the ball with power to her right sending the keeper the wrong way. As she turned to celebrate with her teammates she was swamped by jubilant Scottish players. 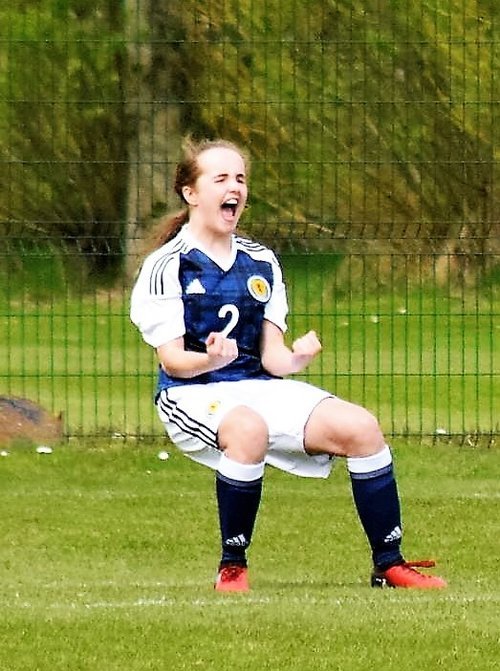 The ball hitting the back of the net had ignited celebrations both on the pitch as well as with the large group of travelling Scottish supporters who rose as one to congratulate the players. It was a fine and fitting end for a team who had competed consistently throughout this campaign and with a little rub of the green may well have achieved more than a narrow defeat against the hosts and a draw against the eventual winners. A result however against the ‘Auld Enemy’ is always a nice way to finish.

The phrase of the campaign was that you had to ‘Live It To Learn It ‘….These young ladies certainly did that, they lived every situation and scenario and now we all hope that they can learn from this experience of playing and representing the Scottish Schools and for them to go forward with happy memories and a desire to get better individually and progress to the highest level that they can playing football with a smile on their face. 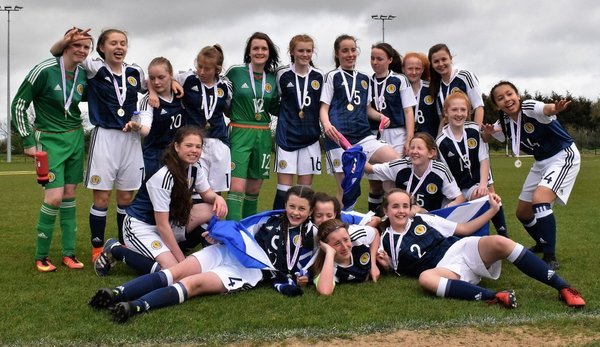