Game two for Scotland began again in windy blustery conditions against a strong and powerful Welsh team that had seven players who had played in the first team or in the invitational team at last year’s Bob Docherty tournament held at the Dragon Park complex in Newport.

Scotland started playing into the elements. AJ Meach had come in for Alicia Yates and Hannah Scott had retained her place to partner Kathleen McGovern with Karsey McGlinchey on the right-hand side. Laura McCartney had switched sides to the left with the impressive back four or Rebecca McAllister, Carly Girasoli, Cara Henderson and Hannah Cunningham keeping a solid defensive base for Georgia Crooks and Jodie Strachan to drive forward from. 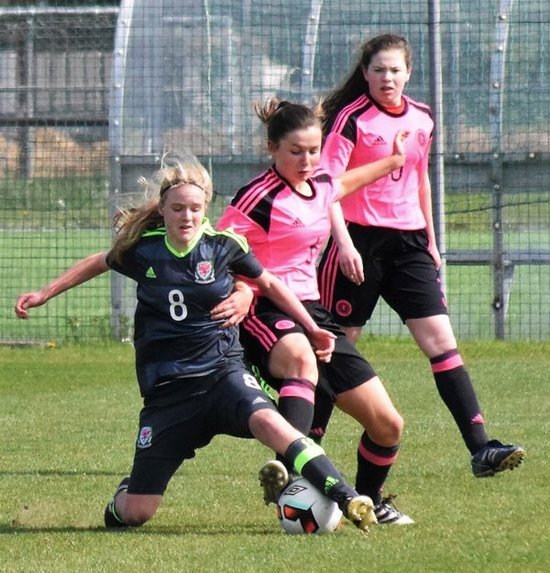 The early stages of the match were encouraging for Scotland with Hannah Scott and Karsey McGlinchey continuing where they had left off yesterday, being positive and direct and looking to break down a very powerful looking back line and the defensive-minded shape of the Welsh team. Although Scotland had their fair share of the ball they had to rely on set pieces for any early attempts on goal.

Neither team created much in the way of goal-scoring opportunities with Wales using the long ball in an attempt to break down the resolute Scottish defence. However both Cara Henderson and Carly Girasoli were having none of it and stood steadfast and solid as the Welsh struggled to break down the Scots.

The game lacked composure because of the fiery pitch and strong wind but Scotland managed to see out the half with AJ Meach only called to take control of one dangerous hanging cross that she plucked confidently out of the sky. The ball was just not arriving at the feet of the front players due to the strength of the wind. The wide players had to run more with the ball at their feet which was a tiring relentless task but they had done their job to get the team into halftime without conceding a goal.

The second half began and the Scots big question was whether they could harness the wind and create opportunities to get shots on the Welsh goal. The introduction of Mhairi Crooks in forward positions gave the Welsh a new problem and with Aisha Maughan coming on in her favoured right hand berth it was hoped that the Scots could manufacture an opportunity to score the one goal that would win this tousy affair.

Eilidh Shore probed and passed and attempted to get the ball past the Welsh midfield and defenders but everyone was cancelling each other out and the game was looking more and more like a draw. Unfortunately for Scotland the second half became a carbon copy of the first with neither side producing any moments of quality that could break the deadlock. 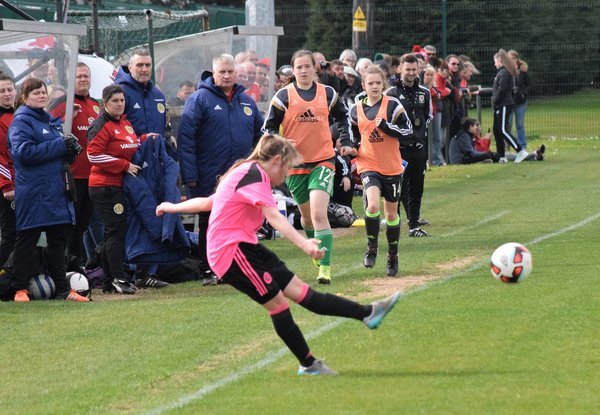 Scotland attempted to change the result with the introduction of Rosie McQuillan in an advanced position, taking off Hannah Cunningham at full back in an attempt to win the three points. But even the introduction of this young attacking player could not influence the outcome of this game.

Apart from birthday girl Carly Girasoli heading narrowly past with five minutes remaining there were no clear chances to speak of and the game fizzled out with both teams gaining a point each bringing the need of the penalty shoot-out for the bonus point.

Sadly for Scotland on this occasion it was the Welsh who were victorious as they were successful with four of their attempts with Scotland missing two. However there was no time at all to feel sorry for chances missed and two points dropped as due to England being beaten by Northern Ireland it had set up a Scotland versus England game the very next day. The exciting prospect of an International against the ‘Auld Enemy’ is always a therapeutic remedy for any football player. 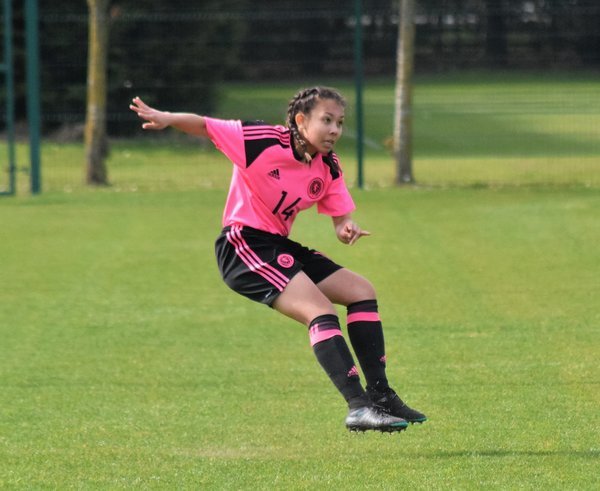