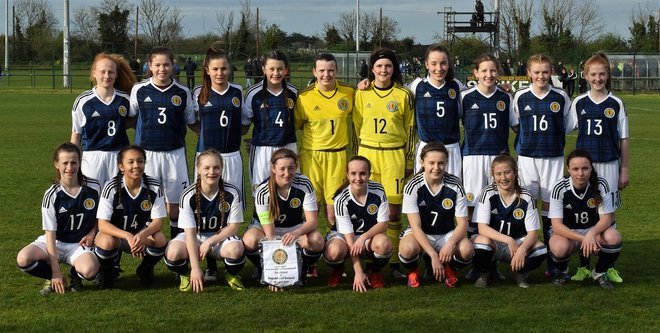 The 2017 Bob Docherty Cup was held this year at the AUL complex in Dublin, and the six competing teams were looking forward to four days of competitive International football and, as always since this tournament started in 2002, they were not going to be disappointed. The results from day one had the Republic of Ireland and Wales fighting out a very close goalless match with both defences dominating. After the final whistle and with the teams locked together the bonus point available would be decided by a penalty shoot-out. On this occasion Wales were victorious and gained the important winning bonus point. Who would have thought that this would be so important over the next two days?

England were also in action against the local invitational side Shelbourne Ladies who included some of the team that had won the FAI Cup the weekend before. Again at this level of football the games are always going to be close and chances would be few. After the sixty minutes of game time the teams ended one goal each and the penalties again would decide the bonus point.

The victory and bonus point was decided by a Jasmine McQuade penalty as she coolly slotted home the winning spot-kick for England.

It would be the second day before Scotland arrived in Dublin and the results in both sections emphasised the importance of a good start against a Republic team who simply had to win the match.

You could see the excitement and nerves etched on all of the players from both sides as they walked out in front of an expectant crowd on the AUL pitch. Even a loud rendition of Flower of Scotland on the team bus had not settled all of the nerves. The large following of parents, family and friends from both teams clapped and cheered as the players shook hands with each other before the 6pm kick off.

The game itself understandably started nervously for both teams especially with the elements picking up as the game started. Scotland had a very strong wind at their back in the first period and although they used it at times, they were noticeably cautious of playing direct football as this was not the way they had successfully played both at home in the warm up games and in their trip to Jersey, where they got the ball down and passed it and used their individual footballing talents to their advantage. The bumpy grass surface and stiff breeze hindered both teams in their passing options but this was International football where the intensity is higher and mistakes are capitalised on, and so understandably both teams remained cautious.

However the first chance of the game came after a wonderful free kick that was delivered from the left by Philippa McCallum. Jodie Strachan attacked the ball and glanced it goalwards. Unfortunately on this occasion it drifted past the post with the keeper stranded in no man’s land.

Both teams then settled into a passage of play where they attempted to get the upper hand. The Republic’s best opportunities were coming from set-pieces and after one of these was half-cleared it broke to the Irish central midfield player who attacked the loose ball at the edge of the box, but the Scots were happy to see the ball in this instance drift over the bar. 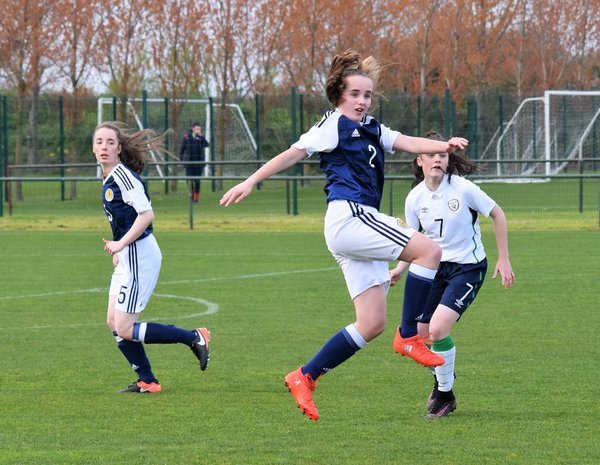 The Scots then produced a fine passing move down their right-hand side with Rebecca McAllister and Georgia Crooks combining to feed Laura McCartney. As she shifted the ball onto her favoured right foot she delivered a teasing ball into the six-yard box. It was a determined captain KATHLEEN McGOVERN who made sure she was first to the ball as she hooked the ball on the volley at the front post past the despairing keeper, 1-0 (12m). It was a wonderful feeling for the goalscorer as she was mobbed by her jubilant team mates.

The goal however sparked the Republic into life as they had to get back into the game, but the central defensive partnership of Cara Henderson and Carly Girasoli as well as the powerful defending from Hannah Cunningham and Rebecca McAllister were holding firm from any attack that the Republic had to offer. 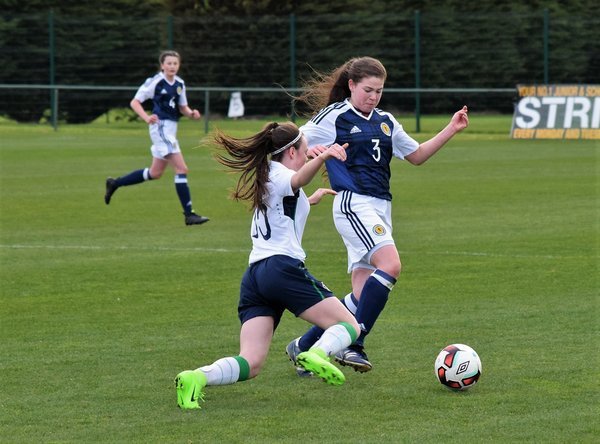 Chelsea McEachran and Kathleen McGovern were getting more joy in the opposition box but only as half chances and it was one of these half chances that fell to Chelsea McEachran, but unfortunately the ball would not fall for her on this occasion. As the halftime whistle drew ever nearer it was obvious that Alicia Yates in the Scottish goal and the back four would be worked harder in the second period as the wind picked up yet again. 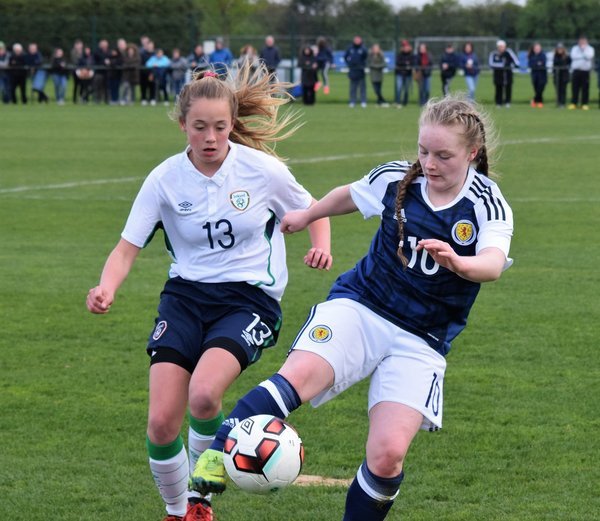 The second half however could not have started any better for the young Scots as from kick-off the ball was played to Jodie Strachan who delivered a perfectly weighted diagonal ball beyond the left full back to Laura McCartney, who took a touch to control and then deliver a perfect ball which was acrobatically volleyed home by KATHLEEN McGOVERN. It was a goal that could have graced any game on any occasion, 2-0 (31m).

The goal, instead of settling the girls, appeared unfortunately to do the opposite. Ireland had to win the game and had sent on two tall strikers to use the elements in the second half and proceeded to bombard the Scots goal. As was mentioned this level of football is unforgiving and if you make mistakes the chances are that you will be punished, and it was to be the case in a mad ten minutes that the game turned on its head.

The Republic played “route one” football but it was successful as it provided them with three goals in this short period. The Irish midfield payers latched onto the second ball faster than the Scots and shot from distance with the strong wind at their back. The first goal set the tone as it was crashed in from distance, 2-1 (33m).

The second came minutes later from a now rampant Irish team,
2-2 (37m). It would have been nice for the Scots to have had time to settle and get back to passing the ball but individual errors across the team let the Irish off the hook and before the girls knew it a third goal was scored, 2-3 (41m). The Scots were finding it difficult to get the ball up to Chelsea McEachran and Kathleen McGovern to hold the ball up for them. 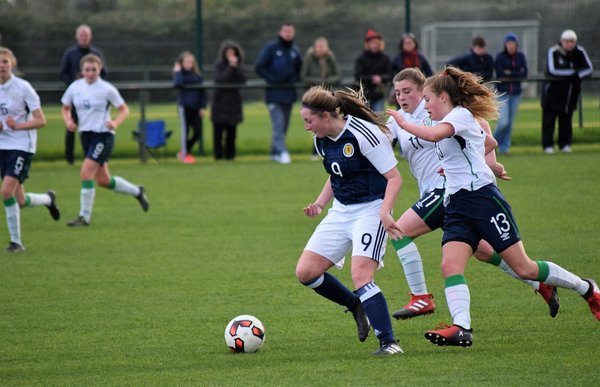 A fourth goal for Ireland came midway through the half in this frustrating period for Scotland, 2-4 (45m).

To their eternal credit the young Scots rallied together particularly when Karsey McGlinchey and Hannah Scott entered the fray. Indeed it was the determined positive run and closing down of Hannah Scott that sent Kathleen McGovern bearing down on goal only for her to be tripped in the box by the Irish defender. KATHLEEN McGOVERN proceeded to pick herself up and place the resulting penalty kick into the keeper’s right hand side to complete an International hat trick on her very first International match for the Scottish Schools, 3-4 (47m).

This was a wonderful landmark at the start of hopefully a long International career. The probing passing and direct running of Hannah Scott and Karsey McGlinchey jolted the players around them into one more big push.

Aisha Maughan then collected a pass on the left to easily ghost past her opposite number. She delivered a ball across the face of goal that was just too far for Hannah Scott to connect with. With time moving on and the Scots’ comeback well and truly on it was the hope of the travelling supporters that Scotland would get one last chance.

Hannah Scott again robbed the tiring Irish defender and played a perfect ball to Kathleen McGovern on the run towards goal. As she powered into the danger area, the defender upended her again but on this occasion and to the total disbelief of the players and spectators the referee waved away the vocal protests of everyone and Scotland were denied the opportunity for a creditable draw. Three minutes later the referee blew the whistle for the end of the game.

The Scots would have to lick their wounds quickly and learn from the mistakes but also build on the many positive aspects of the game, as they had their next challenge against a confident Wales team to come the very next day. 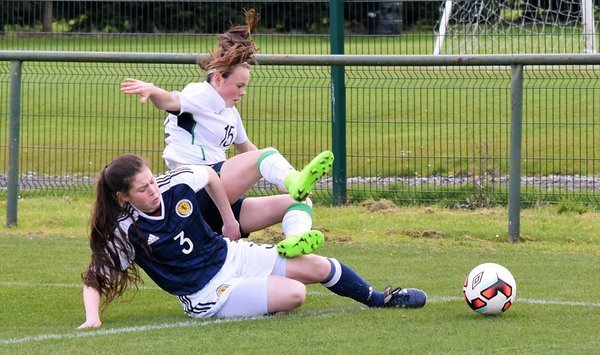