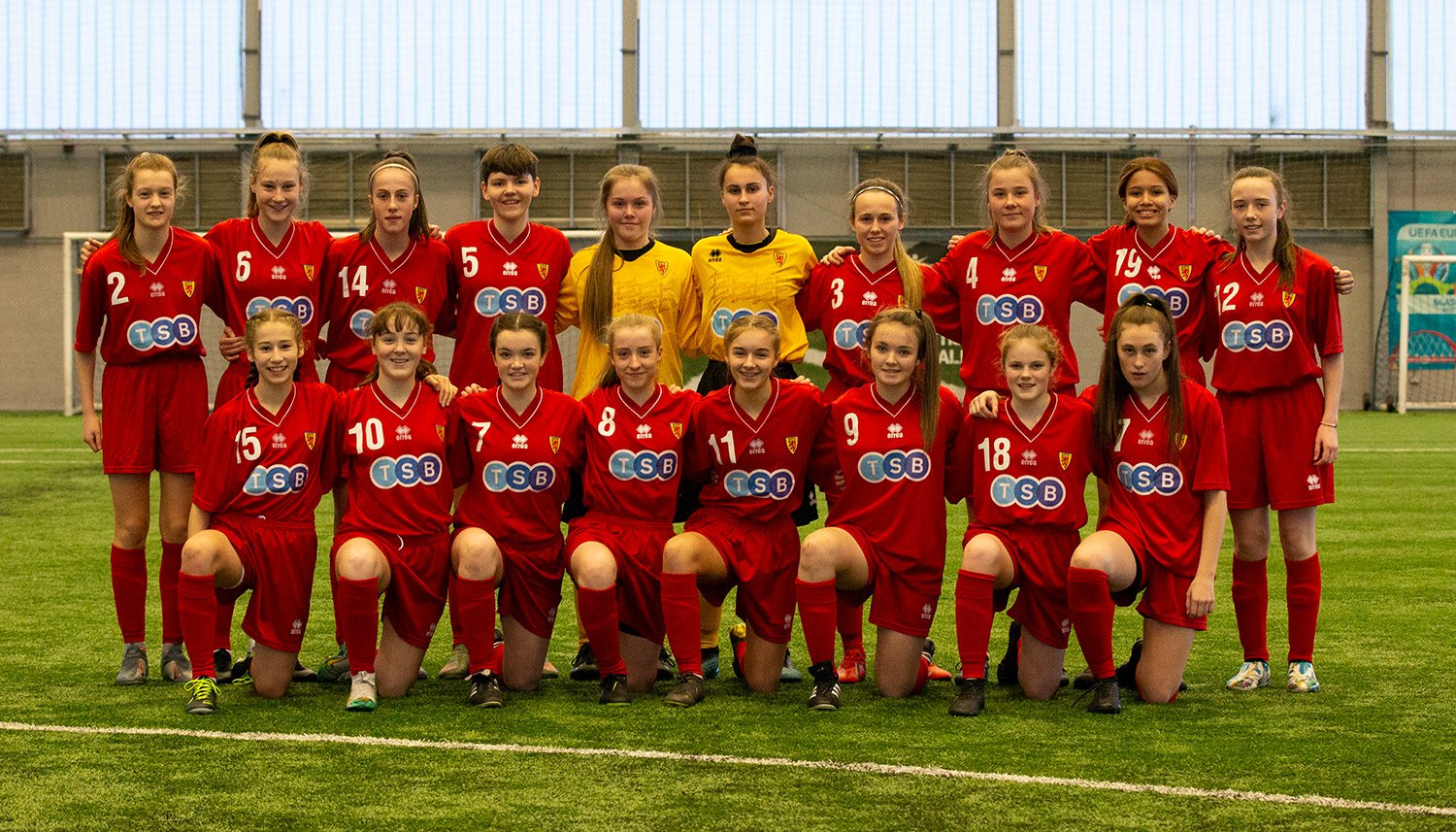 The Scottish Schoolgirls squad of 2020 had their first preparation game today at the Toryglen Regional Football Centre, Glasgow.

Twenty years ago, saw the first SSFA U15 squad play against their Welsh and Northern Irish counterparts in Edinburgh and since then each squad has represented their country with both pride and passion.

These young ladies will continue to express these traits with the knowledge that the players that have gone before them including many full Internationalist are desperate for them to do themselves and the country proud.

The opposition today in this annual challenge match was Rangers. This very strong Rangers squad who included previous SSFA players and current SFA U16 squad players were going to be a tough test for this fledgling school’s squad.

The SSFA team started with Annalisa in goal and a back four of Eilidh and Niamh as the full backs with Lily and Madilyn as the centre backs. The midfield four consisted of Jodi, Georgia, Keira and the captain for the day Kirsty. The two strikers were Ami and Sophia.

From the outset there would be no time for any nerves as the game sprung into life with both teams playing such a high tempo and pace from the very first whistle.

The expectant large crowd were not disappointed by the early exchanges as both teams demonstrated the level of skills and techniques that you would expect from all of the players on display.

It was pleasing to see that the Scotland team started on the front foot with both Ami and Sophia proving to be thorns in the Rangers defence. However, the powerful defending and the excellent goalkeeping kept the Scots at bay.

Kirsty was beginning to find her range of passing and began to dictate the pace of the game in these early exchanges.

Jodi and Keira were beginning to get some joy down both flanks.

They were continually fed by both Kirsty and Georgia and on this occasion the ball was delivered expertly from Jodi on the right-hand side, Ami fired her first serious attempt on goal but it flashed just wide.

The best chance of the game so far then fell to Kirsty as she linked up with Sophia inside the box. She twisted and turned and got herself free. Kirsty had done so well to get through a couple of challenges and it was so unusual not to see the net bulge, but on this occasion the ball agonisingly went past the post. It was fantastic to see Kirsty getting into that advanced position.

Rangers took heart from the early exchanges with Ex-SSFA Internationalist Hannah proving to be a constant threat on the right-hand side. It was great to see her back to her powerful best.

If the defence was breached, Annalisa was proving to be assured and confident in goal.

The see-saw nature of the game continued to the end of the first period with the only question being muted was how there were no goals in such a pulsating game.

Despite the usual raft of substitutions, the intensity of the game continued to be of the highest quality.

Lily continued at centre back with Millie joining her. Leigha and Caitlin took over the full back duties.

With three of the back four now bedding in the young Scots were looking to build from this new solid base.

The open game continued to ebb and flow. Niamh moved to a more advanced position on the left and combined very well in the early stages of the second period with Caitlin.

Indeed, it was one of these combinations that provided a through ball for Olivia who had come on to add to the fire power up front. Olivia’s snap shop was very well blocked by the Rangers defender to give Scotland another corner.

Tiree then had another chance for the Scots as the ball was again delivered from the left flank, however the ball would just not sit down for her and although Tiree met the ball with a clean strike and power it just cleared the crossbar.

Leigha was also unlucky not to get on the end of yet another dangerous corner.

The game deserved a goal and it was not too long before an opportunity was given to Rangers to take the lead.

Rangers had forced a corner on their left. The ball was delivered into the box and as it shot up from the surface it inadvertently struck the arm of Lily as she attempted to clear the awkward ball.

The referee pointed to the spot and it gave another ex-SSFA Internationalist Rosie the opportunity for Rangers to take the lead.

However, Annalisa stood tall and made a tremendous save throwing herself to her right and pushed the ball to safety.

The penalty gave the momentum to Rangers and it was not long before they took the lead.

Another set piece, this time from the right was met by a ‘lone Rangers’ head at the edge of the 6-yard box.

The Scots looked around at each other and I am sure they will make sure that there will not be a repeat of the ease in which the ‘moonwalking bear’ arrived without detection.

Ava replaced Annalisa in the Scotland goal half way through the second period and settled into the role with confidence.

She was quick to react to any through balls that the Rangers were playing beyond Millie and Lily. However, both girls turned on the after burners when ever danger was detected.

The goal did not deflate the young Scots and indeed Kirsty and Olivia had chances to equalise before the keeper made a fantastic double save to thwart the Scottish forwards.

It was good to see the Scots back on top in terms of possession as the referee blew his whistle for the end of the second period.

After the break the Scottish girls once again took the initiative with both Sophia and Tiree finding the Rangers keeper in inspirational form.

On one occasion thwarting Sophia by bravely smothering the ball as Sophia attempted to take the ball around her.

The Scots were on the offensive now looking to get the goal that their play deserved.

However, it was from a break away that Rangers were awarded a fortunate free kick at the edge of the box. The resulting free kick was initially well saved by Ava but the ball broke away from her strong hand and fell agonisingly to the onrushing striker who blasted the ball into the net.

The Scots instead of feeling deflated, lifted themselves and picked up the pace of the game and continued to knock on the Rangers door.

Jodi who had come back onto the right-hand side linked up well with Sophia in the Rangers box and as the defender hesitated, Sophia casually took the ball around her and blasted the ball into the Rangers goal.

Hopefully this would be the first of many for the young striker and the squad of 2020.

As it was it did not take long for the brace to arrive.

Georgia drove forward as she had done relentlessly during the game and slid the ball to Olivia who pushed a delightful through ball beyond the defenders and as Sophia touched the ball around the keeper with a little more pace than earlier, she was away.

The young striker did not panic, collected the ball with a lovely first touch and strolled towards the goal. Again, with no hurry she passed the ball beyond the defender on the line.

Scotland could have indeed won the game with Kirsty hitting the bar and Jodi just clearing the bar with the keeper well beaten in the closing stages of this pulsating game.

It was a fantastic advert for both club and International football in Scotland.

The players and coaches from both teams would have benefited from such a good work out at this point of the season and we are looking forward to seeing the full squad including Emma who was nursing an injury in the next outing against an older Hamilton Accies team. It was a good positive start to the Bob Docherty Cup campaign at Easter time in Wales.

Sophia, Olivia and Kirsty after the game against Rangers