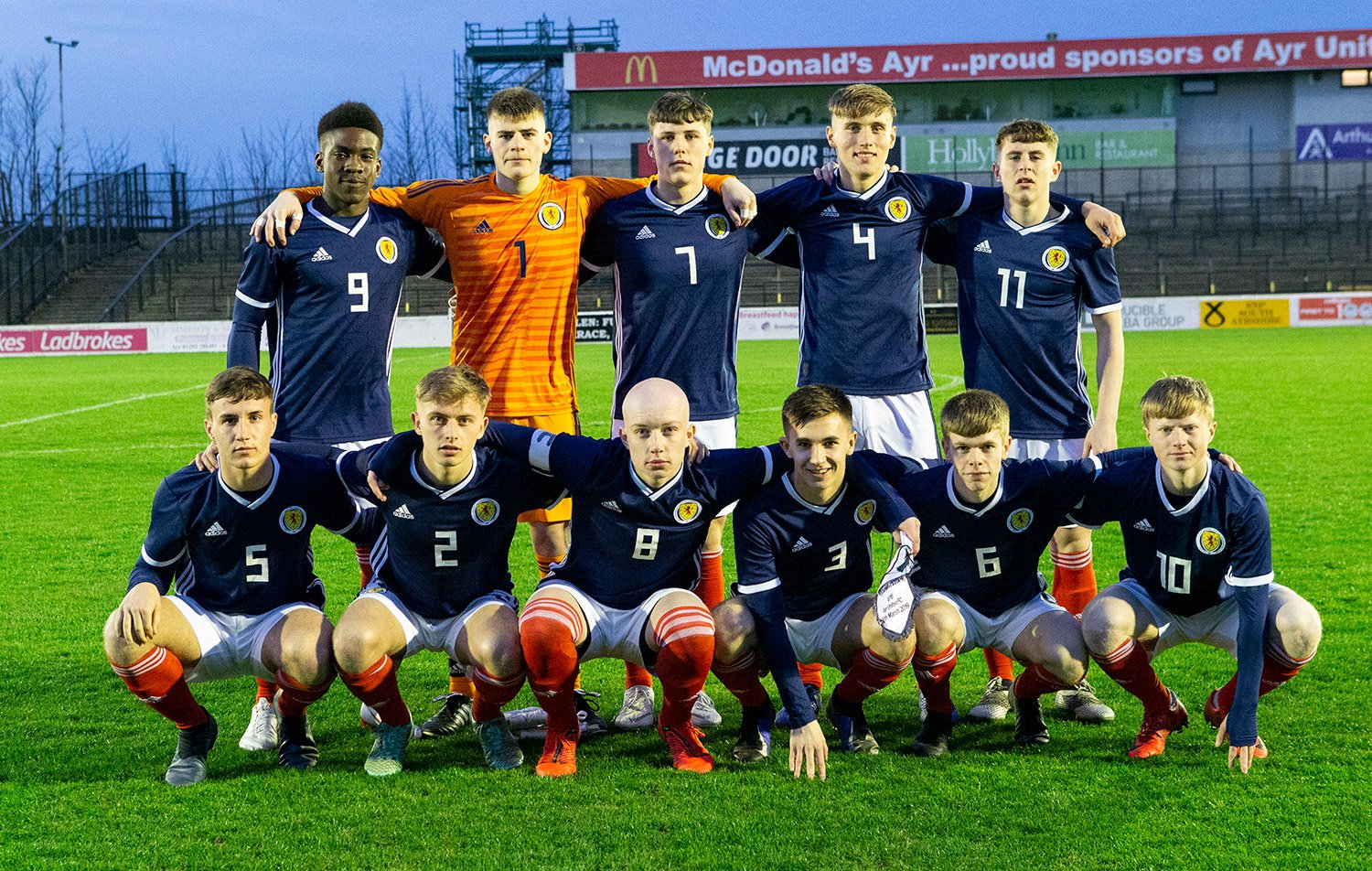 All square at Ayr

Scotland played their second home international within six days at Somerset Park in Ayr – the first international in Ayrshire for a number of years.

Whilst this was the home side’s third international in this year’s SAFIB Centenary Shield, the visitors were playing their first.

Forward Brandon Bermingham certainly wasn’t overawed by the occasion as he latched on to his keeper David Odumosu’s clearance to scamper down the right touchline and deliver a deep cross which had to be carefully defended by Scottish left back Ross Smith.

Odumosu’s next involvement was a more conventional one. Christopher Stafford’s long pass allowed Tiwi Daramola and Lyall Cameron to hare in behind the Irish defence. Daramola looked to play in Cameron, and just as the forward was about to pull the trigger the keeper combined with central defender Josh Honohan to repel the attack.

Play swept to the opposite end and this time Scotland’s goalkeeper Jacques Heraghty had to look alert to grab Jake Ellis’s dangerous low cross from the left.

After this lively first fifteen minutes Scotland looked to establish the pattern of play, and the Irish goal certainly appeared to be threatened more regularly.

Three saves by Odumosu underlined the Scots’ superiority as he denied Cameron, Mulligan and Daramola in turn.

As Scotland sought to break down the visiting defence with combination play (Mulligan, Cameron and skipper Jack Hodge were particularly prominent) the visitors sought to breach the Scottish goal by crossing from wide areas.

Stafford twice rose to clear dangerous crosses from Colin Kelly and Corey McBride, whilst Finlay Baird had to look sharp to block two goal-bound efforts from Keith Carter and Jake Ellis in a spell of play which saw the Republic of Ireland awarded four consecutive corner kicks.

Another Irish corner found its way to the back post before Stafford booted clear and this strategy was causing the Scotland defence problems with dangerous deliveries from McBride and Kelly.

The home side came even closer five minutes before half time. A quick free kick from Cameron allowed Hodge to advance upon the Irish box. His left foot shot from 20 yards cannoned off Odumosu’s crossbar with the big keeper well beaten.

A minute later saw Scotland’s turn to thank the woodwork. Ellis powered down the left and sent over a deep cross which was comfortably cleared by Jamie Thompson. Unfortunately the defender’s clearance rebounded off Finlay Robertson to the feet of Colin Kelly who thumped in a powerful effort which bounced off Heraghty’s right hand post and behind to safety.

After this excitement Scotland finally scored on the stroke of half time. Hodge passed to Lyall Cameron around 30 yards from goal. He drew a defender before shifting the ball to JOSH MULLIGAN who appeared to be just about to be crowded out. With defenders all around him he stretched and sent an accurate shot across keeper Odumosu and into the bottom corner of the net.

Scotland made two changes at half time, bringing on Owen Andrew and Archie Meekison for Tiwi Daramola and Finlay Baird. The visitors made an interesting start to the second half as Jake Ellis tried a shot directly from the kick off but Heraghty saved comfortably.

The visitors forced their first corner of the second half a minute later. Again a dangerous low delivery was fired in, forcing Heraghty to save on the goal-line. Unfortunately for the keeper Colin Kelly was on hand to prod the loose ball into the net from a distance of approximately a foot.

Scotland swept to the other end and a familiar piece of combination play (this time involving substitute Meekison and Lyall Cameron) allowed Mulligan to shoot, but his effort was well saved by Odumosu.

With half an hour remaining Ellis was presented with a good chance for the men in green. A break of the ball allowed the forward to run in behind the Scottish defence. He tried a shot across the angle of the box, but the effort flashed across the face of Heraghty’s goal.

Another pleasing move between Smith, Hodge and Mulligan set up Lyall Cameron who shot wide from 20 yards. This was to be the forward’s last involvement as he was replaced by Josh McConville in a move which allowed Scotland a tactical alteration.

Daragh Ellison then made a 50 yard run down the Irish left to play in Ellis, but the forward shot wide, whilst Mulligan made another of his characteristic runs forward only to be crowded out by the central defensive pairing of Carter and Honohan.

The last fifteen minutes were a little scrappy as both sides shuffled personnel. Scotland’s best opportunities saw Meekinson have a shot blocked after clever play by Mulligan and substitute Josh Doig bustling into the Irish box before firing over.

At the other end another substitute Dylan Coll defended heroically by launching himself into two last gasp challenges as the ball bobbled around following yet another corner for the visitors.

The game finished in a draw which would probably please the Republic of Ireland more than their hosts after an intriguing clash of styles in Ayr. Next up for Scotland is their concluding fixture, against Wales at the Rock, home of Cefyn Druids on Thursday April 11th.