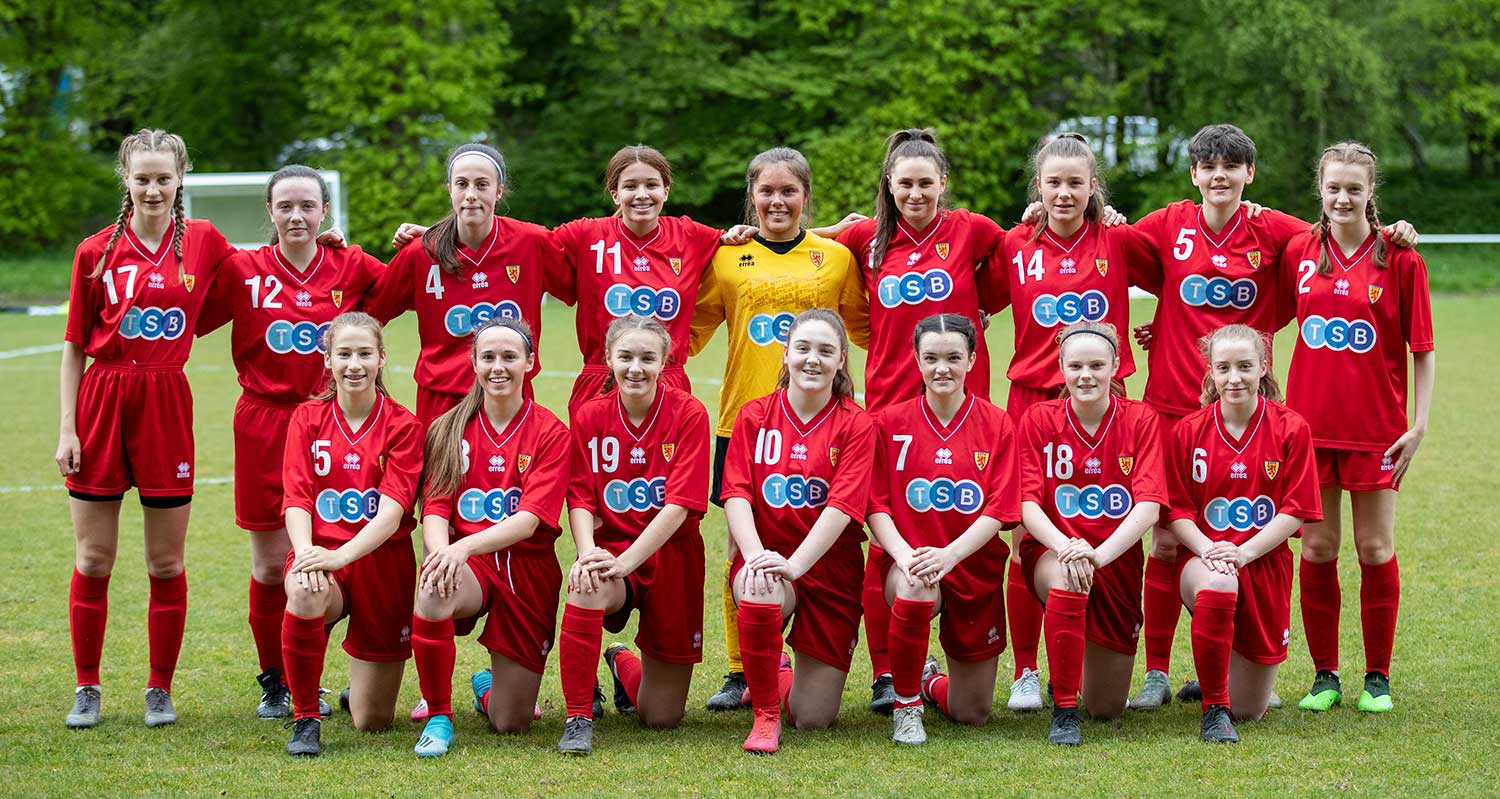 Friday the 14th of May brought about a challenge match between the hosts Rangers and the Scottish Schools Under 15 squad that was 14 months in the making. Tuesday the 3rd of March 2020 against Boroughmuir at Meggetland seemed such a long long time ago.

All of the Covid protocols had been adhered to with a limited number of supporters in attendance. The players and supporters had been scrutinised with individual Covid questionnaires completed, temperature checks taken and social distancing followed making this wonderful occasion of a competitive football match a reality.

Scotland were without two players from the squad. One due to the Covid restrictions of not being able to travel out of the Moray region in Annalisa and also Sophia who had a slight hamstring strain. The International challenge match on the 5th of June against England was high on everyone’s thoughts and the need for the full squad of 18 players essential. It was wonderful to see the players meeting up again, smiling and laughing in each other’s company but determined to show that the time away from the pitch had made everyone even more determined to show the level of individual skills coupled with the team ethos that got them chosen all those months ago.

The match started with Ava in goal with a back four of Eilidh, Millie, Lily and Madilyn. Kirsty started in front of them alongside both Emma and Olivia as a middle three. Jodi and Caitlin played as the wide players providing the ammunition for Ami up top.

Scotland could not have started the game any better as directly from the kick off Kirsty played a lovely weighted flighted ball over the oppositions left back where Jodi took a perfect first touch and bared in on goal. Her right foot shot flew past the Rangers keeper and nestled into the corner of the net. 1 – 0 in the first attack of the game. Welcome back!

The game settled quickly and it was great to see Kirsty pulling the strings. She passed and probed and dictated the tempo of then early exchanges. Caitlin and Madilyn were beginning to combine well on the left-hand side and were linking well with Emma who was beginning to pick up little pockets of space as she looked to combine with Ami. Indeed, it was one of Emma’s direct forward runs that made the next big chance for Ami. Her burst of pace set up the lone striker and it took a fine save to thwart Ami’s powerful shot at goal.

Olivia was also getting on the ball, providing telling passes inside both full backs encouraging both Caitlin and Jodi to attack their opposite numbers. Jodi was tormenting her full back ably supported by the impressive attacking play of Eilidh. The full back was providing an added attacking presence with her athleticism providing a major factor as the Scots kept pushing forward for another goal.

Any attacks that the Rangers had were being dealt with admirably by both Lily and Millie as they snubbed out the Rangers striker. The next telling move started by a great interception by Millie who drove forward to link with Emma before releasing Jodi on then right-hand side. Jodi skipped past the defender and delivered another great teasing ball across then 6-yard box but on this occasion, it alluded the runs of both Ami and Caitlin who had arrived at then back post.

The period finished with Scotland on top again with Olivia and Emma combining with the latter firing a shot just over then top of the crossbar.

Scotland made some changes at the start of the period with Leigha and Niamh coming on as the full backs, Georgia joined Kirsty and Olivia in the engine house with Tiree and Keira coming into the wide positions. Jodi took up the role of the central striker with Ava looking to retain her clean sheet.

Again, Scotland started on the front foot with Georgia driving at the heart of the Rangers defence. It was great to see the confidence of the central midfield dynamo as she drove her team mates on. Both wide players were also demanding the ball as both Kirsty and Olivia continued to feed them. Leigha too was showing a willingness to get forward and deliver telling crosses into the box. It appeared to be just a matter of time before the young Scots scored again. Keira was teasing and tormenting her full back since the period started and, on this occasion, had forced a corner from another positive run. She took the corner herself and her expertly delivered ball found the head of the onrushing Tiree. 2 – 0 to Scotland and it was no more than their attacking play had deserved.

Tiree almost doubled her tally just five minutes later as she latched onto a lovely through ball from Kirsty but on this occasion, she pulled her shot just wide of the keeper’s right-hand post.

Ava was at times a spectator but she was always alert if required and kept both Lily and Millie on their toes when needed. Niamh and Keira were combining very well on the Scots left hand side and with Jodi keeping the Rangers defenders busy the Scots continued to pin the opposition back. It was Olivia now who was the provider as she combined with Georgia at the edge of the box. As the ball fell kindly to Olivia, she drove it towards goal. The Rangers defender did well to block it but it struck her arm and a penalty was given. Olivia herself felt confident and expertly placed the ball beyond the keeper and into the net.

The pace and tempo from the Scots kept high throughout the period as the players went for more. Indeed, as the period was concluding Georgia had a chance as she cut in from the right-hand side but unfortunately although her powerful shot beat the keeper it also beat the back post.

The third and final period started again with both sides making changes in personnel but Scotland kept the sane formation throughout.

Niamh moved forward with Keira going up top. Caitlin playing as the full back with Madilyn joining Lily at the heart of the defence. Ami played as the attacking option from the middle of the park. The changes again did not hinder the Scots, indeed it was a delight to see that the tempo and direct play had been consistent throughout the whole game. The passing of the ball and the ability to keep possession when necessary was a very pleasing aspect of the young Scots.

Emma and Georgia were still driving the team forward and their fine combination led to another corner to the Scots. The delivery from Keira again was right on the money, in fact it was right on the head of Ami who powered her header home at the back post to increase the Scots’ lead. Just after the restart Niamh and Caitlin combined to play in Emma who shot just cleared the bar.

The final goal of the game was without doubt the best of them all. The combination down the right-hand side started with Eilidh as she had come onto replace earlier for Leigha. The full back played in Ami who in turn picked a lovely pass into the stride of Tiree. She looked up and played the perfect ball into the onrushing Keira who attacked the front post and swept the ball into the net giving the keeper no chance. It was an excellent team goal to finish an excellent squad performance.

In three weeks’ time these girls including Annalisa and Sophia will be taking on their English counter parts over the border in Newcastle. It will be a game that will be an exciting and emotional occasion for everyone but it is a game that everyone is so desperate to see.